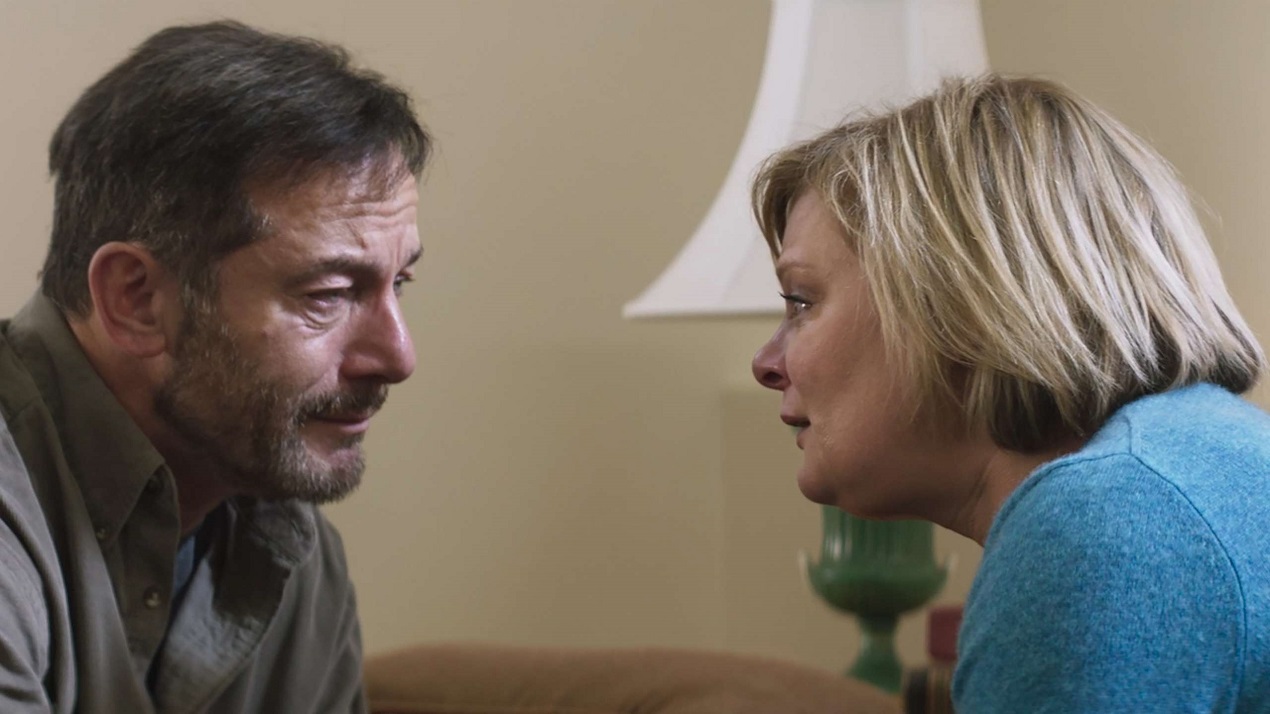 I fully understand this won’t be my most read review, as Mass still feels like this almost “underground” film only a few movie nuts have heard of. That is strange, considering everybody who has seen it can confirm three things. The less you know about this movie before going is better, it’s a brilliant movie, and all four lead actors should have been nominated for Oscars in their respective categories. Yep, this is how I have stumbled upon this film; I heard this is a “shoe-in” for all four performers. What a surprise it was when neither actor got nominated. I think this might be one of the Academy’s most colossal and noticeable mishaps in the last decade.

I have challenged myself to write this review without spoiling anything. Everything I had read about Mass before going in was so perfect; I will continue in this as I strongly believe this is one of the rare films that works without you knowing the main idea of the film. All I will tell you is this – the movie is about two couples coming together in a church to discuss something, a tragedy that has affected both of their lives. That is the only thing I knew about this film, and please do not search for anything else as this movie’s pacing is so deliberate it reveals all the answers in its own time. The movie wants you to be a bit confused first to possibly sympathize with all involved before knowing what the tragedy is because that is where the cookie crumbles. Once you know what is happening, you will form your opinions about who is right or wrong… except you might struggle, as I have too, to label either right or wrong. Mass is almost a perfect film about how tragedy affects everybody, so it’s hard to judge any one person as being wrong here.

As stated above, Mass is mainly a performance piece for four brilliant actors. Jason Isaacs, Martha Plimpton, Ann Dowd and Reed Birney. It rarely happens, but I can’t name my favourite performance because all four performers have their specific roles to play, and they play off each other so well that one can’t work without the others. They are a true ensemble where you can’t lift one without mentioning the others. They each get a moment to shine, but it never feels forced. The movie felt so natural regarding this aspect; all four performers talk like regular people would. Sometimes they talk over each other, sometimes they struggle to formulate what exactly they mean, but it always felt “right”.

I know it’s almost cliché to write: “How come Academy did not nominate person X, Y or Z? What a travesty.” But in this case, it really felt bizarre as all four performers put everything they had into their roles. I could also imagine a script getting a nomination, as, without that, there isn’t a movie to celebrate. And again, this script is so clever, revealing the story slowly, letting you get in the mood and get to know everybody before we understand why they are there in the first place. And especially with this story and topic, what a genius (and I don’t use that word lightly) execution. This film should be showcased in movie writing classes as a bright example of enabling your viewers to follow the story naturally as it unfolds. I imagine most films of this nature would want the audience to be one step ahead. But Mass lets us make discoveries for ourselves without any “interference” or playing favourites.

The only “tiny” problem I had with this film and the reason I can’t give it the maximum rating is I have seen movies like this (people talking for an hour and a half), and those managed to suck me in a bit more. I don’t know why I was, at times, detached from this film, but that is what happened to me. Maybe it was due to me not having to experience what they are talking about (and I am hoping I will never have to live through something like it), and that is why I could not have imagined what the characters were going through? Possibly. I will give you an example, one of my favourite “nothing happens, you just watch people talk about everything for 90 minutes” films is The Sunset Limited (2011). I would be surprised if many people have even heard about that film, let alone seen it. But it’s directed by Tommy Lee Jones (who also plays a character only known as ‘White’) and co-starring Samuel L. Jackson (playing the other character, called ‘Black’). If that doesn’t intrigue you enough, let me throw this into the mix, it is based on a play by Cormac McCarthy (go through his filmography if his name alone doesn’t ring any bells), and it shows. And that movie grabs you and doesn’t let go until it’s over. Mass captures you too, but there were moments (even if not that many) where I felt not 100% in the story. It will be fascinating if I ever re-watch this film and whether I will feel the same way or not.

Overall, Mass is a near excellent film that will stay with you for a while. You will think about everything that is said by all the main characters; you will try to imagine how would you react if you were on either side and how awful would that be. And even if there were some tiny moments where I felt slightly disconnected from the film, I wholly admit that might have been just a “me problem”, and your experience may vary. Mass is 100% worth searching and seeing, for the performances, the screenplay, and to give you something (albeit dark and uncomfortable) to think about. It’s definitely not a movie you put on if you want to chill and relax. Please see it and go into it as blindly as possible to fully experience this film on its terms.