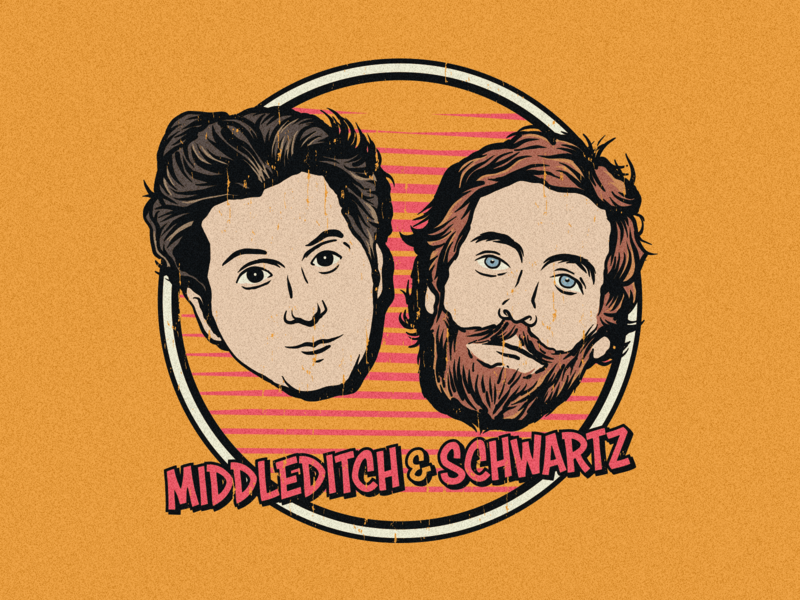 I love any kind of comedy, but I have got a special place in my heart for an improv comedy. I know that is really “in” thing to say right now, so let me just put it this way – I am not only still watching Whose Line Is It Anyway? (yes, it’s been back since 2013, on CW!) but before this, I have stumbled upon some clips from the “old” Whose Line Is It Anyway?, with Drew Carey and that resulted in me watching the ENTIRETY of this show. Yes, I, to this very day, have seen all Whose Line episodes, I had even tried watching the original British version (how many people know the American version isn’t the original?) but the thing about it… it’s too “classy” for me and this might have been one of the few instances, where bringing an IP (intellectual property) to the USA to make it “bigger, better, swifter” actually worked for the show, rather than destroyed it. Anyway, point of this is, I really love a good improv show. And Middleditch & Schwartz is definitely worth watching.

If you are (like me, how we’ve just established) a fan of improv and especially Whose Line kind of improv, be aware, as this is something completely different. There are two major differences between what Middleditch & Schwartz are doing – the length, and the format. Let’s break it down…

The length – unlike Whose Line, Middleditch & Schwartz are almost an hour episodes, where they don’t play “games”, or do anything “too crazy”, they try to combine improv within a story from an audience member. That mostly works, but because of this, it also creates a constraint, that you can’t cut around a joke, if it doesn’t work/land as much as they’d wish.

That leads me to the format of the show. Given the almost sitcom like nature of Whose Line, you can tell they only use the best takes/jokes from any recording session, so us, as the viewers, are always entertained. And since they play several different games during each episodes, there always should be plenty of material to make each of the performers look great. Whereas Middleditch & Schwartz are taking on much bigger risk by making the format different, harder, by trying to tell some sort of story, remembering names, trying to set up jokes that might or might not pay off 10/15 minutes later…

That is why I admire both of these gentlemen – their balls must be the size of… something really big, to be able to go out on the stage, knowing somebody will tell them a few details and for the next hour or so, they need to make something really funny out of that, where there are no breaks, there no saving graces, nobody else to hide behind and because of this, you know there will be some places, where the jokes will not land as well, or where they don’t know, where to move that particular story even further.

That is why I was really impressed with all 3 episodes, as I have laughed a lot and most importantly, you can tell they have done it a lot, and I don’t mean improv, but working with each other. Their connection is so strong, they can often tell if the other person has forgotten a name, or something else in the scene and immediately mocks him for it, or they’d pick up on a really small detail and that would give them an extra bit to spice up the scene (the toiler paper scene in the 3rd episode comes to mind).

The only reason I am not giving Middleditch & Schwartz the full rating, is I do believe they could make laugh even harder and I honestly can’t wait for Netflix to give us more episodes. Especially in these (still quite weird) times, comedy is important and these two will make you laugh, if you let them. So Netflix, once this whole COVID-19 goes away (by the latest estimates, the year 2356 looks pretty promising I’m hearing) please give them the resources for an extra shows, as I’d love to see what these two can come up with. Because from the glimpse of what I’ve seen so far, I’m impressed and entertained.