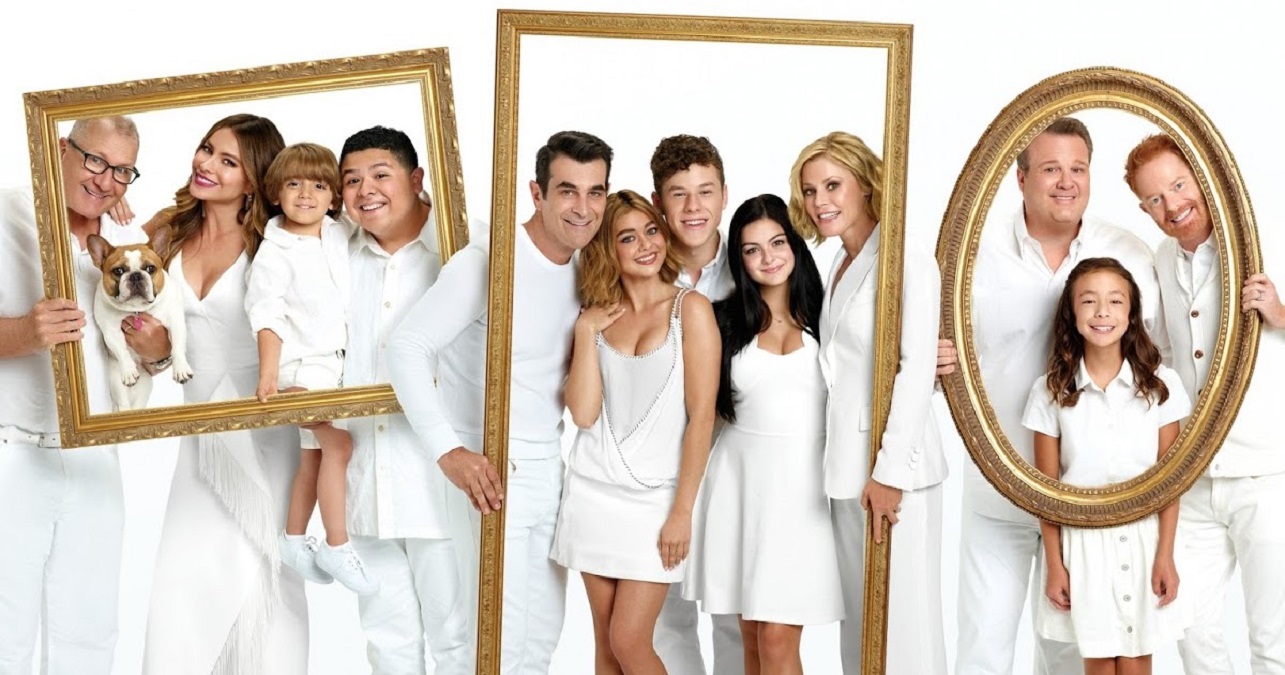 Modern Family is a show I’ve always heard great things about but never watched as there were (and still are) so many different shows to watch first. So many “better” shows, or at least that is what I would often say to myself, thinking I will eventually get around to watching this one. As I’ve heard so many great things about it, how it’s funny, full of heart, practically brought back the family sitcom genre that was on its way out… And yes, after finishing all eleven seasons of this show, I can confidently say it’s a delightful TV show that, without any shadow of a doubt, rates highly within its genre. A genre, by the way, that it not only brought back but also redefined for the modern audience.

Is Modern Family the first TV show to utilise the “talk to the camera” documentary concept? No, of course not. If there is one thing that was almost a staple of comedy shows in the 2000s, it was that fake-documentary approach that helped revitalise comedies (see The Office (2001 – 2003), the American version of The Office (2005 – 2013, my review here), Parks and Recreation (2009 – 2015) to name a few). And in between all those shows stands this one. It could have easily failed had it relied “just” on this “talk to the camera” approach. But it didn’t. As the title suggests, we follow one big “modern” family consisting of three families. One you would consider “normal” (mom, dad and three kids) and the other two that are “modern” – an older guy who married a much younger Colombian woman and a gay couple who just adopted a Vietnamese baby. And spoiler alert, they are all related.

And here’s the thing, just reading what the show is about, you might think this doesn’t sound that funny maybe even, on the contrary, you might think this show will be preachy, “woke”, or insert other adjective people often use to dismiss something. But this is where you’d be wrong, as Modern Family knows what it wants to say but, at the same time, isn’t afraid to make fun of itself, every single family member and what’s more important, they never go for cheap shots. Many jokes are edgy (some in the earlier seasons might be too edgy for today’s audience), but they never go “full mean”, which is the most crucial part. The word “family” always looms above it all. No matter what happens, no matter who is the butt of the joke in a particular episode or a scene, it all goes back to them being one big, happy(ish), dysfunctional at times, family. That’s why the show ran for eleven seasons. Because even when the quality declined just a bit in the later seasons, you still wanted to hang out with them. As you believed in their bond, you trusted they were an actual family.

Another unique aspect of this tv show is the “lack” of leading role(s). Because all “main” actors get more or less equal screen time in most of the episodes, it’s hard to argue who is the lead. That might be a sore spot for other shows, but for Modern Family, this is where it shines. Even the actors made a pact in their first season to always nominate themselves for awards in supporting categories, never leading (source IMDb.com). And sure, if you haven’t seen a single episode of this show, it might sound like your typical “we are all family here” type of comment. But if you watch the show, you will see that decision was simply brilliant and correct. Sure, we all have our favourite characters on this show (I will name a few soon), but even I couldn’t pinpoint who would be the “lead” actor or family. Because they truly work in unison and get (roughly) the same amount of screen time. I bet if you were to conduct a poll and ask 100 people: “Who is the leading actor/actress in Modern Family) you would get at least six different answers.

For the record, my favourite characters are… basically all of them, to be honest. But if I had to single a few people out, it would be – Ty Burrell, Sofía Vergara, Jesse Tyler Ferguson from the adults and Ariel Winter and Aubrey Anderson-Emmons from the kids. Why? Ty Burrell is the dad I’ve never had and always wanted. Goofy without being dumb, reliable, funny, charismatic, he’s always there for his wife and kids. Sofia Vergara is a stunning woman who ages finer than wine and is hilarious. Even when you watch interviews with her, you can see how quick and funny she can be. Jesse Tyler Ferguson was the perfect husband to his husband, and the storylines involving his dad (portrayed by the TV legend Ed O’Neill) were among the best ones. That is what I appreciated that they showcased people who aren’t black or white. The episodes centred around Jesse being gay and his dad (who loves him but sometimes struggles to understand him) always felt honest without being too condescending or shallow. It’s not insane to say that Modern Family played some part in the USA for the people to be more accepting of the LGBTQ+ community. Ariel Winter and Aubrey Anderson-Emmons blossomed on this show and showcased their comedy chops. Sure, I’ve heard people argue that the writers didn’t know how to write materials for the kids once they grew up and yeah, to a certain point, I agree. You can tell some (like Luke, which is a nice name :-)) stayed pretty much the same. But I always thought both Ariel and Aubrey played their characters so well and in such a unique way. Ariel’s character was great as when she had to be the joke, it worked, and when she had to make/nail a joke at somebody else’s expense, it also worked. I’ve mainly admired Aubrey’s sarcastic, almost “bitch slap” comments where they might seem, at times, her being too mean. But for my money, many times, she was the only adult in the room.

But I honestly could have written down all the others here. They all bring something different and unique to this table full of talented performers. I believe that’s one thing people don’t mention often enough when talking about this show – there are so many characters. But they all (even the side and recurring ones like Cam’s sister) feel unique enough to exist, to be their own people. Every time they come back, you remember who they are, what they “stand for”, and what can you expect from them.

As I’ve alluded to above, this show lasted for eleven seasons. That means the quality dropped a little towards the end of this show’s run. But it never dropped enough where I would have to lower my overall rating, or I would pray for this show to be over. As again, all of these performers work so well together; I was ready to forgive some weaker episodes and just wanted to hang out with them. Plus, I will say this, even in their weakest episode, there would still be one or two jokes (at least) where I was laughing loudly. And multiply this by ten for the best episodes.

One other thing I appreciated about Modern Family was the willingness to talk about death, and some deeper relationships issues at times. It would seem almost wrong for them not to as they suppose to represent us, the viewers. And we all have to deal with losing a loved one or for us not realising how much somebody hurt us in the past. Modern Family was never afraid to go there and talk about these things, openly, calmly, yet always in an entertaining way where there wouldn’t be an episode that’s “too sad” to re-watch.

Overall, Modern Family is an outstanding show. Is it perfect? No. Could it have fewer seasons? Sure. Would I want them to have more episodes? Absolutely. Despite the quality drop, I wish they would give us a few more seasons as the casting directors managed to catch the lighting in the bottle here. Where every character is brilliantly cast, and they all “jell” with each other, you (or at least I) were willing to look past weaker jokes/episodes and simply enjoy the ride. I could see this show being one of those I would pop in randomly now and then. I finished this show a few days ago now, and I already miss it. I think that says it all. If you are like me and have always heard about it but never watched it, give it a chance. You might just fall for this show the same way I have.