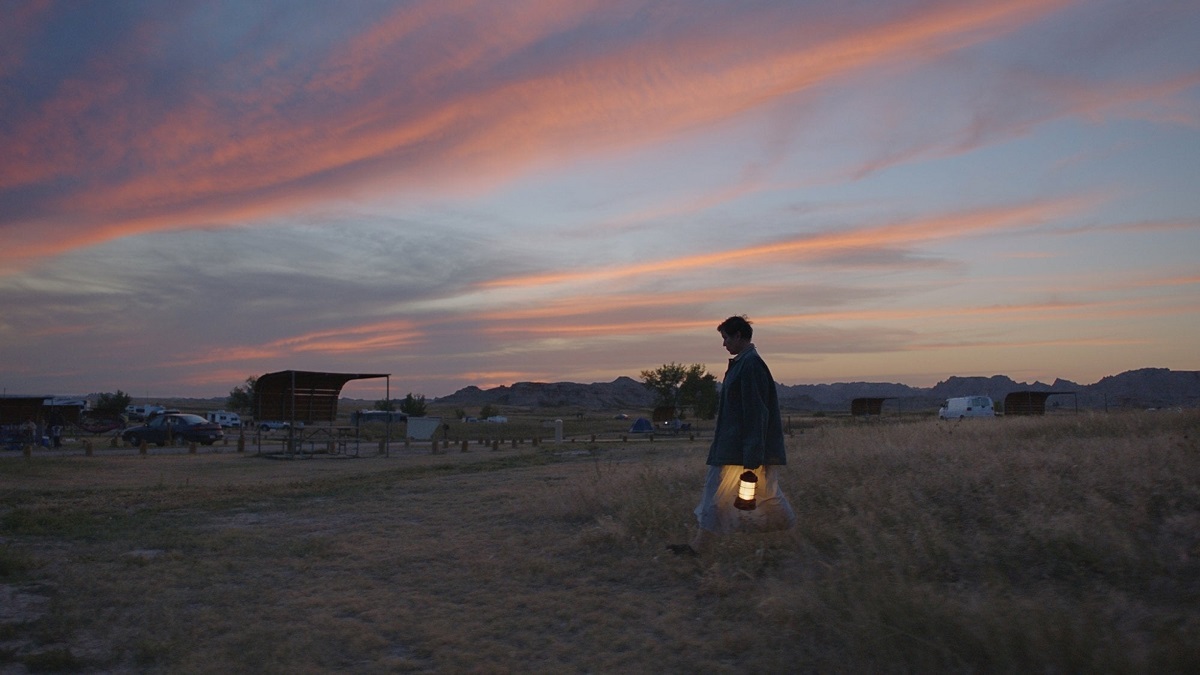 I am not going to lie; this film surprised me. And I will tell you why. From the far, it seems like your stereotypical “indie project that managed to win an Oscar” because it’s long, pretty to look at, and nothing much happens. All the Oscar promos I watched during The 93rd Academy Awards (2021) gave me the impression this film is nothing more than that, and I have to say those promos talked me out of watching this film for a while because I must be in a specific mood to appreciate these films. Well, I found myself in that mood some time ago and finally watched it, trying to separate the accolades this film received and see it for what it is. And it worked.

Nomadland is only the third film for Chloé Zhao after her debut Songs My Brothers Taught Me (2015, my review here) and The Rider (2017), but you couldn’t tell. Well, at least I couldn’t, that this film was shot by somebody so young as it feels like a movie one might make in their late 50s or early 60s. And maybe that is why many found themselves enchanted by this “little movie that could”. Nomadland is told and shot with such precision it feels big at the scope (we have some breathtaking shots here, and the movie covers many different locations) but “small” at its core. It is a very simple story about anything but a simple character Fern portrayed by Frances McDormand. It is at this point of the review I have to stop and admire what Frances did.

The more I think about the kind of career Frances McDormand has had over the years, the more I am convinced she might be one of the most interesting people in Hollywood. With three Oscars under her belt (the most recent one being for this film) and all being for leading roles, she’s already made her mark in cinematic history, and I believe if you were to sit down with her for a coffee or two to pick her brain, your world view might change. Even her Oscar-winning speech showcases how engaged she is, and what is more important, it feels authentic. And that word, ‘authentic’, is a great one to describe her performance in this film, as she is in every scene of this movie. Sure, that might be a narcissist’s dream, but it is an extremely tough task as there is a danger of “too much of a good thing” that can spoil your appetite. But not in this case. Her character doesn’t talk much (another example of why she truly deserved that Oscar), yet you can always tell what is happening in her head. Her Fern is a complex “piece of work” character who occasionally does things differently, things more “normal” (or traditional thinking) person would not do. But what Frances brings to the table here is her massive talent and the ability to make you understand everything with either a limited number of words or no words at all. Talk about mastering your craft when you can do what she does, and you make it seem so easy.

Nomadland features (as it’s almost tradition at this point with one of Chloé’s films) many non-actors who are, in fact, “nomads”. People with no “fixed” homes roaming around from one job to another, living a very minimalistic lifestyle. It speaks volumes that Frances was never sticking out like a sore thumb; quite the opposite. If you read through trivia for this movie, you will see that many of the actual nomads didn’t know she was an actress and were convinced she was one of them. The reason I am mentioning this is simple. It would be easy for Chloé to shoot this like a documentary, but she never did. She never went down that road and made this a truly cinematic experience with Frances at the helm. And that experience stays with you.

Yes, Nomadland isn’t a film you would put on on a cosy Sunday afternoon when you just want to “chill”. It is a movie that requires more of your attention and “investment”, but if you are willing to pay attention and invest the emotion and time this film deserves, I believe you will be rewarded by the end. Because Nomadland‘s beauty is that at its very core, it is something most (if not all of us) wondered about at one point in our life. The idea of “what does everything mean”? Where does it say I have to live a “traditional life”, and what does that even mean? Why not just sell everything I own, invest it into an RV and travel around, doing these odd jobs, just to support myself and my partner, living on the bare minimum. Escape, or trying to escape the stress of our everyday lives. Well, many people (myself included) think of that for a minute or two and can see many flaws with this plan, and we get back to being “comfortable”. And then, there are these nomads, who actually go for it. Who are willing to sacrifice everything to be free, or as close as possible to the idea of freedom, not tied down to property, land… I admire that. This lifestyle would 100% not be for me, but there is a part of me who admires people who can do that.

Overall, Nomadland is a powerful film with one of our finest actresses at its core. It is a film that’s not trying to convince you to become a nomad but what this film is trying to do is to show you that lifestyle as close as possible while being cinematic. Did the film have to be almost two hours long? No, at times, it dragged just a tiny bit. But also, that is my only “real” complaint, as everything else about this movie surprised me and exceeded my expectations. I can’t wait to see what Chloé does next. I sincerely hope Eternals (2021, my review here) and its reception did not break her in any way, and we can hope for more fascinating movies from her.