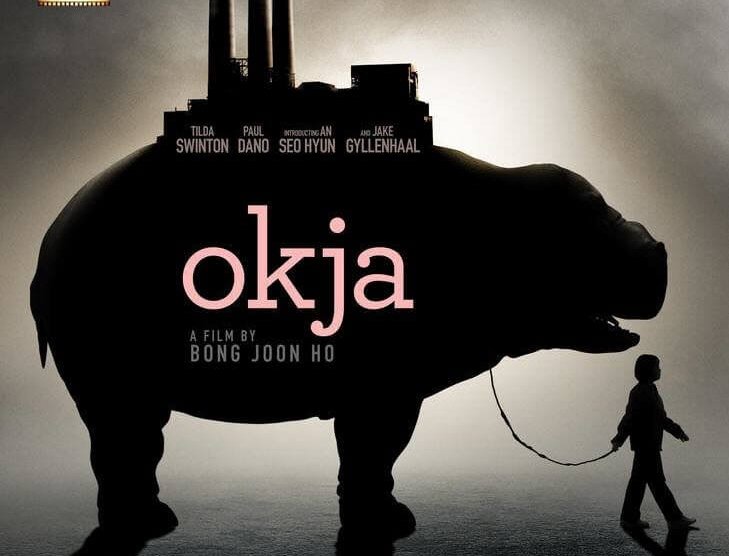 As with plenty of other movies, I’ve heard so much (both good and bad) about this movie, ever since it came out on Netflix back in 2017. I’ve heard about the Cannes fiasco (article here), I’ve read plenty of different reviews, so I was composing myself before watching this movie, as it was in my Netflix queue for the longest time (I know, shame on me). And then, something else happened.

Yes, The Oscars 2020 happened, where Bong Joon Ho became the star of the evening, for his brilliant movie Parasite (2019) that collected the most important awards that night. That somehow made it even “harder” for me to watch this movie, as my expectations went through the roof, even though it doesn’t really make sense, as everything that’s happened that night had nothing to do with Okja.

Well, I’ve finally got around watching it the other night, and I was blown away. Because I have expected this movie to be well shot, with really interesting story, colourful characters and some message behind it all, but I didn’t expect how smart it will be.

This movie would’ve been so easily done in a way, where there are the good guys and the bad guys, where everybody who eats meat is bad, and everybody who doesn’t and is fighting against it is good. But I’ve (for the last time, I swear) underestimated Bong Joon Ho, as he is one clever fella. The thing that struck me with Okja, is how he made it feel like a something that could happen in our world.

The following will contain SPOILERS!

Let’s get over couple of examples of this good vs. bad, how this movie deals with traps where a lesser movie would’ve fallen into. The “big bad” company, respectively the people running it, are not some “we need to kill everything, because we hate animals” cartoon characters. They are strictly business people, where they just want to make money. The key scene here is at the very end, where Mija in a desperate attempt to save Okja, offers Tilda Swinton the golden pig she got from her granddad in the beginning of the movie. But instead of Tilda’s character laughing at her for trying to save that one super pig, she examines the golden one, and says, “Great, you can have that one, we are finished here”. Because they are not is the business of killing this one super pig, they want to make as much money as possible, so given the opportunity, of course she’ll take it. And sure, you can speculate whether this makes her less evil, after all the company is still killing bunch of super pigs, but the motivation behind it makes it more believable. Also, you do get into the conversation “Are people who sell guns bad people? After all, they KNOW that gun will eventually be used to kill someone?” where there is plenty of grey area and no one answer is easy.

Another example, from the “opposite” side, is the ALF people (Animal Liberation Front) where any lesser movie, would’ve made them as perfect as possible. This one almost takes shots at them, at the “group think” where “we’ve come so long for this, so the ends justify the means”, where some of the members think like that and are not that “good”. Or with that one member, who tries to have “the smallest footprint on the planet”, so he refuses to eat and is starving himself, therefore going to the extreme end of spectrum where you try to be helpful, but there are probably easier and more productive ways.

My main takeaway from this film is that it wasn’t trying to say “everybody who eats meat is bad and should feel bad”. I honestly believe the message this movie was trying to convey, was more about mass production of meat, how we should treat animals with decency and courtesy, to make us think about that and whether we want to tolerate that particular part of this industry, that unfortunately does exist.

I’ve seen plenty of movies to know Jake Gyllenhaal is a great actor, but I’ve not seen him like this in a long, long time, where he’s so fearless… He knows exactly what he must do, who the character is and why he needs to be so over the top, and he goes for it, with not hesitations. Tilda Swinton proved yet again, she’s criminally underrated actress (she should have more than one Oscar to her name) and one of the finest actresses of her generation. And Giancarlo Esposito in his small, but meaningful role was also great, but that’s nothing new, he’s always welcomed addition to anything.

With Okja, I’ve seen every movie Bong Joon Ho has made except one (Barking Dogs Never Bite (2000)) and I can now safely say, he’s one of my favourite directors of today. He always delivers, his movies have a certain style/mood, where you can go back to them and find something new almost every single time. I’d imagine, if I were to watch Okja again in a few months, I’d find even more things to appreciate. Can’t wait for that and for what he makes next, I’ll definitely be watching out for that.

That’s all for this one? Did you see Okja? What did you think about it? Let me know!