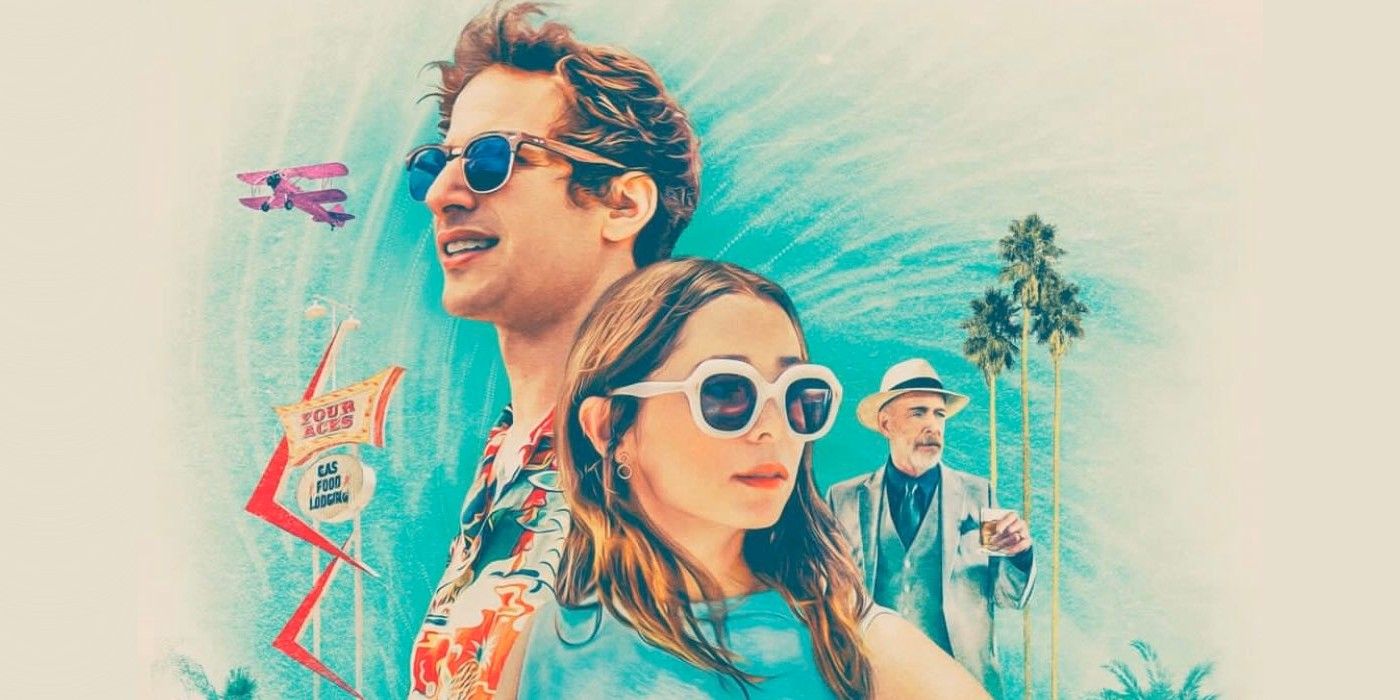 When the first lockdown happened, there were solid two months of nothing but (below) average movies were coming out “on demand”, but nothing that would get any universal praise. And then I started to hear about Palm Springs and how for some people this was an early contender for a movie of the year, even though it’s “just a comedy”. So I was immediately intrigued and wanted to see it, as comedies nowadays are usually miss, rather than hit for me. Some time passed and I’ve noticed it was available to stream, so I immediately watched it and – loved it.

I knew the “twist” from the beginning and to be fair, I don’t think it’s that big of a spoiler, when even the official synopsis for the movie tells you straightaway what to expect – yes, it’s another of those movies, who take the Groundhog Day (1993) route, where character(s) is stuck in a loop of one day. There seems to be no way of getting out of it, so they just try to make it worth their while. But the reason I loved this movie, was it went places I didn’t expect, it did something slightly different with this concept.

Since I want people to see this movie, but also I don’t want to rob potential viewers from those few clever ways how this movie plays with the “stuck in the loop” idea, I need to place a spoiler tag here, so before that, let me just assure you that yes, Palm Springs is a great comedy, great film and definitely one of the highlights that came from 2020. It’s funny, it surprises you couple of times and it has a great story/metaphor that ties everything together really nicely. So without further ado…

First things first, I really loved the pairing of Andy Samberg and Cristin Milioti – if those two wouldn’t work as well as they do together, the entire movie would have fallen apart. They are the heart and soul of this entire thing. Both are amazing in this, but I do need to mention that I don’t think Andy Samberg gets the credit he deserves – he’s been consistently funny, he’s been involved with a lot of great, successful things, he’s had a big part in Saturday Night Live (1975 – ) and he did a lot for them to stay relevant. When the “shift” towards the Internet started to happen, here he was with The Lonely Island (if you don’t know them, just click on the link and enjoy yourself)… and I am sure I am missing out on 20 more things. The point here is, I really hope he starts to get recognized not just as an awesome comedian, who he undoubtedly is, but for being really “master of all trades”. To me, his goofiness, his sincereness, is the heart of this movie.

And if Andy is the heart of this film, then Cristin definitely is the soul. She’s the one, who’s pulled into the loop by him, even though by accident and he told her not to follow him, but she’s the one, who has the extra motivation of getting out of that loop, because every morning she wakes up, she wakes up to a biggest mistake she’s ever made. For me, that reveal wasn’t really a reveal, as it’s hinted at throughout the movie (very well, might I add) but that doesn’t mean I don’t appreciate it, on the contrary. Since I’ve guessed it prior, I could focus on the little hints scattered throughout and understood even more of her motivation of getting out of that damn loop. And her spirit, her journey throughout this film, is definitely great one, where she arguably has the biggest growth towards the end of the movie. Plus, there is something enchanting about Cristin. You just can’t help and fall for her instantly.

Another thing I really liked, was the fact the film just goes right into it, as it (rightly) presumes this isn’t first movie about this topic you have seen, so yeah, we get the “explain the rules” montage, but nothing too long. It didn’t seem tedious, the movie gives us just enough information to let us know where we stand, confirms what we suspect (even if you try to commit suicide or die, you wake up and the day resets, or no matter how far you drive, once you fall asleep, you wake up at exactly the same place) and moves on. And has fun with it. Those were my favourite moments, where our two main protagonists were just having fun with the time loop. The scene, where they plant a bomb into a wedding cake, I genuinely laughed out loud, and that hasn’t happened to me in a while.

And that’s another thing – this movie is actually funny! Which is great, if you are watching a comedy, as if you have seen any comedies lately, you’d know that laughter isn’t always guaranteed. Usually, it’s mild chuckle at most. But in here, because of those two main protagonist, clever writing, a new spin on a well known and explored premise, this movie grabs you from the very start and doesn’t let go until the very last scene. But the movie also knows when the slow down, and has some genuine touching moments. The main idea behind this movie (and what Andy’s character finally understands at the end) that marriage is kind of like a being a stuck in a time loop and it’s only up to you, what you will do with it and who you bring along.

What I also loved very the mini-twists along the way – some less expected (inclusion of J.K. Simmons in the loop, his entire story and the great final scene in the middle of the credits) some more expected (the already mentioned reveal about Cristin’s reason, as to why she is so desperate to get out of the loop) and what surprised me the most, that this might be the first movie of this specific genre (would it be considered its own genre at this point?) that takes The Martian‘s (2015) route and “science the shit out of this loop”. Well, Cristin is. I really loved the scenes, where you can see her character’s determination of learning quantum psychics, educating herself, to the point she understands what she needs to do to escape it.

Overall, Palm Springs is definitely the surprise movie of 2020 for me – comedy, that came out of nowhere for me, made me laugh, made me think and surprised me with new ideas on the “same old” concept we’ve all seen done a few times. This could have easily been another average movie with some funny(ish) scenes, but Palm Springs wanted to be more. And because of the witty writing, great casting and the fact we all needed something uplifting during this weird time, it hits you differently. This is definitely a movie I will be more than happy to re-visit.