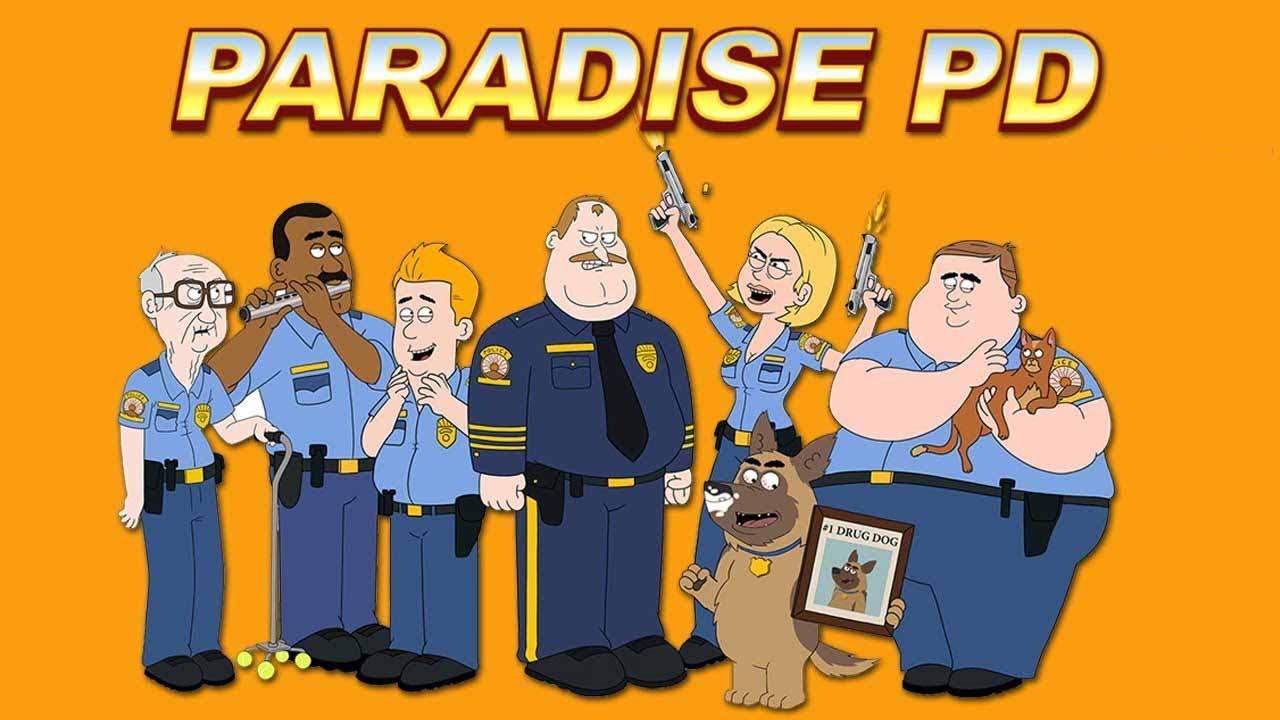 You know this show is something else when you feel the need to start your review with the good old fashioned nugget “Where should I start with this?” Let me put it this way – if somehow, you find South Park (1997 – ? my reviews here and here) to be “not crazy enough” (I don’t know how), then you might want to try watching this show. If South Park is Marmite (as in you either love it or hate it), then Paradise PD is Marmite mixed with Vegemite on top of a pineapple pizza. You are either in for all this craziness, and true “(no) balls to the walls” (hopefully fans of this show will understand), or you are out of this show quicker than a nun running from a sex shop.

Paradise PD is from the same people who made Brickleberry (2012 – 2015). I haven’t seen it, but (un)surprisingly, I’ve heard a few bits and pieces about this show and how crazy it was. Well, don’t be afraid. After Brickleberry got cancelled, the same folks approached Netflix (or maybe Netflix reached out to them, I don’t know, I wasn’t there). And the creators pretty much created similar-looking characters (again, only judging based on the posters and images), but instead of park rangers, they are police officers. Except they are all weird characters.

From a policewoman, who is obsessed with her morbidly obese colleague but he doesn’t care for her, and that drives her crazy to a police dog, who is effectively a human (talking, walking, think of Brian from Family Guy (1999 – ?)) but also into drugs. Like, all the drugs. All the time. And shagging everything that comes his way. And these two are probably the most “normal” ones in this show. I don’t want to spoil all the surprises for you, but trust me, you are in for a… treat?

I know this might sound obvious, but your enjoyment of this show directly corresponds with how much craziness you are willing to tolerate. And whether you get sick (sometimes even physically) of jokes involving… well, everything. Mostly body fluids. The show isn’t afraid to pull its punches. If you want to know what I am talking about, I will do something I haven’t done in a while and attach a video below to judge for yourself. This video is not a spoiler by any means, but if you are easily offended, viewer discretion is… not only advised but recommended.

And this is what I mean by everything I’ve written so far – did you laugh at the scene above? If so, Paradise PD might be your cup of… whatever this show is. If not, do stay away, as there are certain scenes, lot more outrageous scenes (my girlfriend stopped watching this show after episode three of season three called “Ice Ice Babies”. There is a hint in the episode’s title, but I won’t spoil it for you).

If I am being honest – I like this show. I don’t “love” it, but it’s because I wish the creators would make up their minds about the storytelling. Either nothing matters, and this is “just” a dumb, outrageous show with no character growth needed or everything matters. But in that case, some jokes and storylines simply don’t work (one of the main characters turning into a surprising villain, only after a season or so turning back). Believe it or not, this is the type of show that can’t do both. Because where they shine is the outrageous stuff, the types of jokes nobody else does nowadays. And when they try to implement a storyline that should make some kind of sense, it just drags everything down. Surprisingly, even though I was laughing at times, I found myself bored throughout some parts of season three. I understand the creators want to expand and give something more to these characters, but in the world; they set up, it’s hard to take anything seriously, especially after the villain storyline that just felt off.

Overall, Paradise PD is a show I’d recommend to anyone who is looking for an “anything goes” animated show, as that is where this show shines. The storylines contained within an episode are brilliant. And there are a ton of quick jokes, so you can’t watch it with your phone as you want to be focused on everything as they throw things at you any way they can. The only thing this show doesn’t do well is trying to have overarching storylines going through seasons or establishing some characters, just to switch them back and forth. If you are looking for a show where nothing is off-limits, look no further.