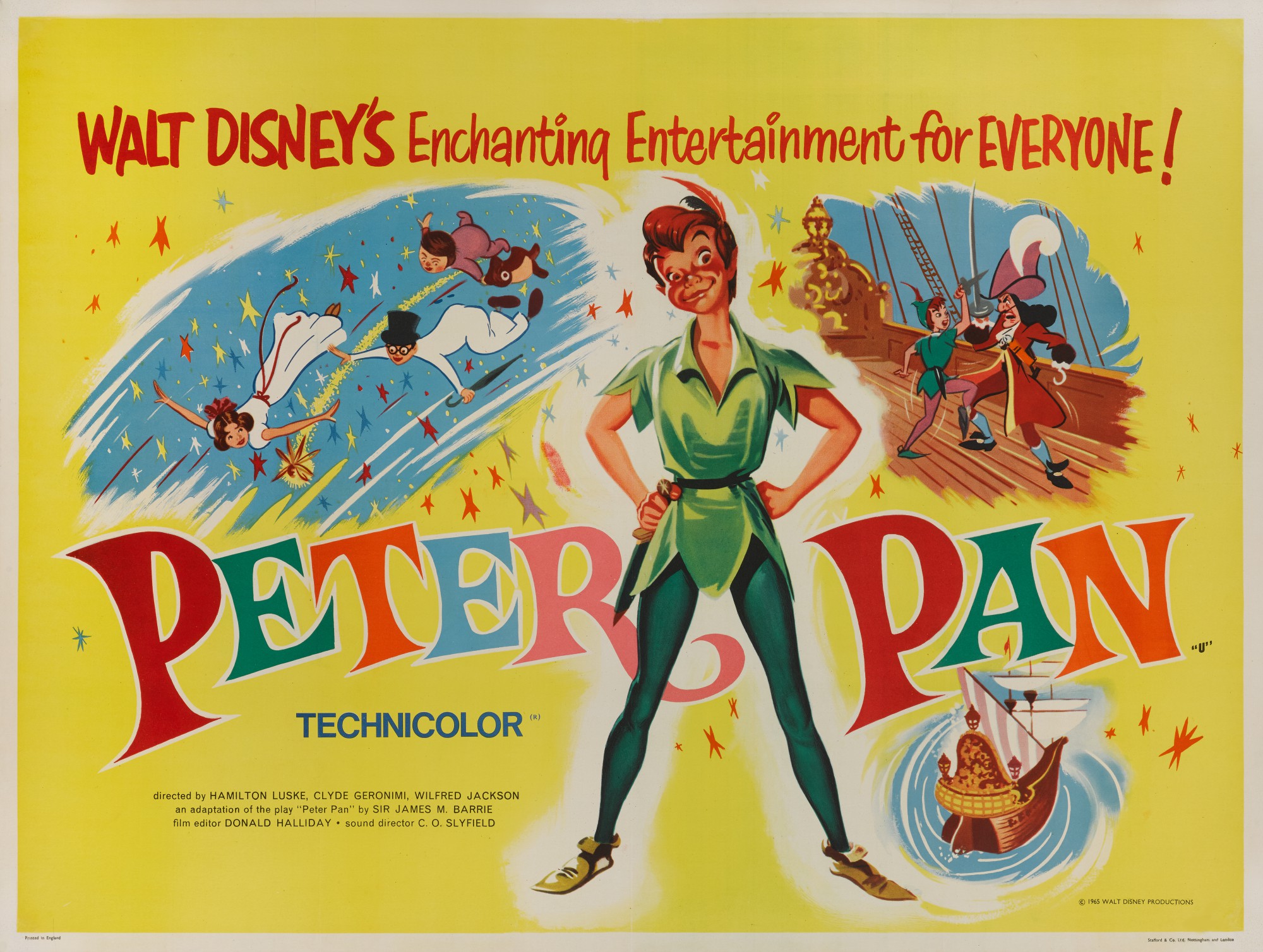 I tried really hard to come up with a way to review this quintessential animated Disney movie. What else, what new can be said, that hasn’t been said before? And yes, I realise that sentence might feel like a cheap cop-out, but it’s truly not. Almost everyone knows the story of Peter Pan, the boy, who doesn’t grow old, lives in Neverland, hangs out with the Lost Boys, right? Yeah, that one. Well, this film is exactly what you would expect from an animated Disney movie of its era. It has a certain undeniable charm to it, but like all movies from that era, some scenes/depictions didn’t age well. That’s when it hit me. Why try to re-invent the wheel, when we can talk about the wagon?

Yes, this won’t be a “pure” review for Peter Pan, as you can sum it up with the sentence “the most Disney film ever” and you’d be 100% right. But what does it mean? Well, maybe the more eloquent way of describing this movie would be “the most Disney film of its era, with all of the Disney beauty, charm and music, with something, that spoils it if we judge it by today’s standards”. But as you can imagine, that’d make a pretty long title for a review, so I had to shorten it a bit. But this would be the most accurate representation of this film, you will truly find every single Disney trope here, plenty of them are still being used today, let’s see:

But here is where I am hoping I will differ from some other people on the Internet, where there are groups of people, who do believe everything that “didn’t age well” should be locked away, so it can’t offend anybody. And I am here to say that’s not the best approach…? Before you start sharpening your knives, pitchforks and light those torches, just hear me out. I am definitely against those depictions and I understand why these things are problematic and the fact they always have been. In this case, just so we are all on the same page, it’s the depiction of Native Americans and some dialogue around them too (like the song “What Made the Red Man Red?” etc.) But I do like how Disney (and especially their streaming platform, Disney+) went around to “solve” this.

Well, they didn’t solve it. They could have easily just edit it, re-dub it with something less offensive, or just not show it at all, no harm done, right? But no, they have done something, I think it’s the best solution for this particular problem, before any of these old Disney movies (honestly, if you grew up on animated Disney movies, go back and you might discover, you don’t remember certain things, especially the ones from 1950’s/1960’s era… Basically, every single movie has something that will make you cringe “a bit”) you will get this screen:

And if you want to hear my opinion (I mean, you are reading a review written by me on my blog, so for some reason, you think my opinion is worth something, in which case, thank you, I am happy to serve you :-)) this is the best way to go about it. Why? To me, the issue breaks down into two points.

The first point is – deleting, changing or not allowing people to see a piece of art, just because something in that piece of art didn’t age well, is contra-productive. Because if you think about it, how do we, as a society or even you, as an individual, learn? From our mistakes. Our mistakes are often the best lessons because only then do we know not to repeat them, as we’ve grown, learned from them. Well, most of us, at least. You know the saying “Those who don’t know history are doomed to repeat it?” Yes, if we pretend this never happened, we are just doing a disservice to everyone. What might also be a sub-point here, it borderlines on censorship, where you have a certain group of people, who is deciding on your behalf. Here’s a mental exercise for you – think of your best friend, your significant other, the person or people, you trust the absolute most in your life. Now, imagine you give them power over every single thing you will watch until the end of your life. Any new media, whether it’s a movie, TV show, a book, has to go through them first, as some sort of filter. Would you really want that? Just a reminder, in this example, some of you might say yes, because you know the person/people who you trust the most, therefore you might feel comfortable with that. Now replace them with a nameless, big, worldwide conglomerate like Disney – would you trust them to always make the “correct” thing? What even is the “correct” thing? I wouldn’t, as I think any reasonable adult can see/judge things on their own and realise, when piece of art is product of its time.

The second point is we need to stop pretending we (and I use the royal we, where I include everybody including myself) have reached some sort of mythical peak of righteousness, that we’ve got everything figured out, nothing else to work on, the humanity has peaked with the current generation that totally learned its lesson and shall not repeat it, we are all good. I hate to burst your bubble, but we are not. I count myself as being a fairly “woke” person, and I think you, my dear reader, are too. But believe me when I say even now, we tolerate something or doing something the future generation will look back with disgust and say “How did you think this was normal? Don’t come at me with your ‘everybody was doing it’, you know that’s a bunch of crap, it’s SO OBVIOUS what you were doing back then was wrong!!” Remind you of somebody? Look, I am not trying to say we shouldn’t strive to have an open conversation about what is right, what is wrong, no, quite the opposite. We should embrace dialogue, no matter how it can make us feel uncomfortable, talking about what “we” used to consider normal. All I am saying is we, as in the human race we all are proud (?) members of, will never be fully there, 100% fair. At least I do not think that is possible. But that is a good thing! Because the moment we think we have reached some sort of peak, what’s the point of questioning ourselves? We can’t stop evolving, questioning ourselves. It’s good to ask, whether what we are doing is right, or are we doing something just because “everyone is doing it, so I might as well?”

I do apologize if this comes across as I am preaching at you or being too “ranty” (that’s 100% a word, no need to google it) I just have strong feelings about trying to bury or burn a piece of history, because it’s uncomfortable as that doesn’t do anybody justice. That way, we will never learn, we would never get the “full picture” of things and how they used to be and most importantly, we can’t allow ourselves to think just because we no longer do X, Y or Z, we are the best generation ever. Trust me, we are not. Yes, we are trying our hardest and that is admirable, but there will always be some things we could (and should) do better, but that is part of life. You live, you learn and hopefully, one day, leave behind a better world for the generations after you.

Overall, Peter Pan (yes, this is still a review of the 1953 movie, even though it doesn’t look like it ;-)) is a movie, that could be in a dictionary under “classic animated Disney movie: See Peter Pan, 1953″. It contains everything we love from that era (catchy songs, beautiful hand-drawn animation, short enough running time) and some things we don’t really like from that era (let’s just label those “problematic things”.) The movie puts everything together and it’s up to you, what you will focus on. We have a saying in my native Czech language, which roughly translates to “After the war is won, everyone is an army general.” It’s easy to sit down and critique this film because of those “problematic things”, saying there are so obviously problematic, why are they even there? We just need to accept that we can’t view older movies through our current “lenses of justice” and do some reading into why those “problematic things” existed in the first place. This is how I see this film – not perfect, but it is catchy at parts, cringe at other parts and can serve as a great place, where to start learning about American history, how that is linked with portraying different races in popular entertainment and why is it still relevant discussion today. Or you can just watch a movie about a boy, who doesn’t age, knows how to fly and fights pirates, that might work also.