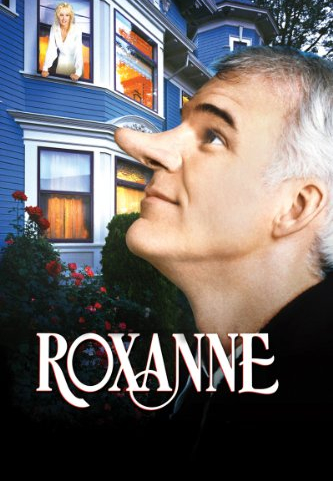 Some movies age like fine wine, where you can look get into them really easily, laugh along with the main characters, enjoy the story. Roxanne is not one of those movies.

20 minutes into this movie I thought “Oh no, this will be one of those films that must’ve been really funny when it was released, but now it will be a snooze fest”. Luckily, I was wrong, as after those 20 minutes, the movie improves. I think it has something to do with Rick Rossovich‘s character, as he’s the perfect foil for Steve Martin‘s character.

Let me just take a minute and go through something – this is where modern comedies make their biggest mistake – they usually cast two (or more) comedians, throw them in some situation and say “Now, BE FUNNY!” and it doesn’t work like that. The best comedies usually work because there is only ONE person that’s supposed to be funny, the other should really work like a foil, an opposite of whatever the comedian plays. In this instance, we have Steve Martin, who’s charming, intelligent, sharp and funny guy. On the opposite side, we have Rick, who’s handsome, and… that’s really it. He relies on his looks, so he doesn’t have to be witty, and he isn’t really dumb, but he’s also not really the sharpest tool in the shed (as Smash Mouth would say), and that’s why scenes between him and Steve’s character work really well, even today. For this to work, Rick needs to stay in his line and not try to be funny, as he’d just clash with Steve’s character and it wouldn’t work as well. That’s why comedies nowadays don’t work that well, as nobody wants to be the foil anymore, as it’s an ungrateful job, because if you do it well, you make the other person shine, and usually people overlook your performance.

The highlight of this movie is definitely Steve in the bar, coming up with insults about his big, big nose – where we can see the almost raw potential of his character and how he truly is, where he has plenty of opportunities to turn sour, but he never does. He manages to balance on a thin line between standing up for himself and not making his character be just about his nose, give us something extra where we can still root for him without feeling “Ok, he’s got a big nose, I get it.”

Other than Steve’s performance, the movie is pretty decent, Saturday afternoon movie, where nothing will surprise you, you might laugh once or twice, you will probably be charmed by Daryl Hannah (and since it was still the 80’s, we definitely needed to have a scene where she’s naked and running around, even though everything is covered up).

If it wasn’t for Steve’s brilliant performance, there’d be nothing memorable about this movie. But he went for it and single-handedly made this movie better, and that reflects in my rating too. Definitely a pleasant movie.

That’s it for this one! Did you see Roxanne? What’s your favourite Steve Martin’s movie? Let me know!