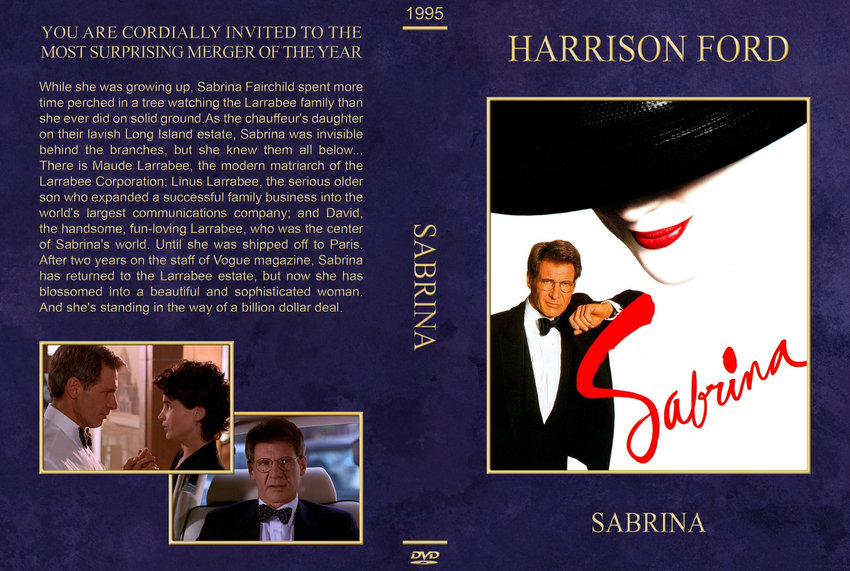 It’s not that long ago I have re-watched the original Sabrina (1954), so I’ve decided to give this remake a go, after all, look at that pedigree! Harrison Ford, Julia Ormond, Greg Kinnear and many more, being directed by the one and only Sydney Pollack? Movie like that deserves a watch.

And I need to say, I was pleasantly surprised, even though at times, slightly confused. Sabrina is definitely not the worst remake I’ve ever seen, even though it is at least 80% the same exact movie. There was some minor changes (like Sabrina going to France, but not to learn to be a cook/chef, but to work for Vogue, being involved with fashion world) and for me two major changes, and paradoxically, one made the movie better and one slightly worse, even though it was necessary.

Let’s start with the good change – in the original movie, I didn’t get the “transformation” of the playboy brother to the “alright, I’m going to take the reigns now” guy at the end. Whereas in this movie, Greg Kinnear sold it better, where you can see his character more throughout other characters in this movie, so when he steps up, and shows everyone, that it’s not just his older brother, who knows thing or two about the business, it doesn’t feel as sudden. I did like it and I thought Kinnear’s performance might sneakily be the best in this movie, but as his role isn’t as big, it’s easy to forget about him.

The “bad” thing was Harrison Ford’s character, as they made him more cynical and jaded (at least it seemed like that to me) than in the original movie. The reason for the word bad being in quotes is, I do understand why they have done it, as his character (until he falls for Sabrina almost at the end) is really a bad person, who’s putting his company first, no matter what. And again, I totally understand why, as his character motivations were stated quite clearly in the movie, about filling out his dad’s shoes and making sure he’s a good fit for this company, but when you think about it, he’s the antagonist (villain) of the story, that only becomes the protagonist (the good guy) maybe 20/30 minutes before the end. But Harrison definitely was good in this movie, no question about it.

Julia Ormond was charming, but to me, she’s had the toughest job of all the actors, as playing the same role as the icon whom Audrey Hepburn unquestionably was, must’ve been terrifying. Look, nobody can’t really compare to Audrey, as she was the total package – charisma, charm, beauty, elegance, wit… but Julia managed, and I thought she did well.

The movie overall won’t really surprise you, even if you haven’t seen the original from 1954, as it follows what became one of the most copied story structures – poor person (usually a woman) watches/works for rich people most of her life, than she’s sent someplace for a year or two, comes back, but now she’s sophisticated, and changed, to a point where some of the rich people don’t even recognise her for a bit, and once they do, they fall for her and realise, what they’ve had right in front of them the entire time. It became a cliche, but it became a cliche for a good reason, as most of us can relate to watching the rich people having good time and secretly wanting to be them.

The only other thing I need to say is, this might be one of the rare instances, where a bit of fairy tale storytelling works a bit better for a movie (the original) rather than the shot of cynicism that (even though is needed) slightly puts the movie down a bit. That’s why I’ll prefer the original over re-watching this remake of Sabrina any time soon, even though it’s not a bad movie at all. It’s just more realistic, mainly when comes to the characters and sometimes, you want that, and sometimes, you just want the fairy tale, with the lovely Audrey.