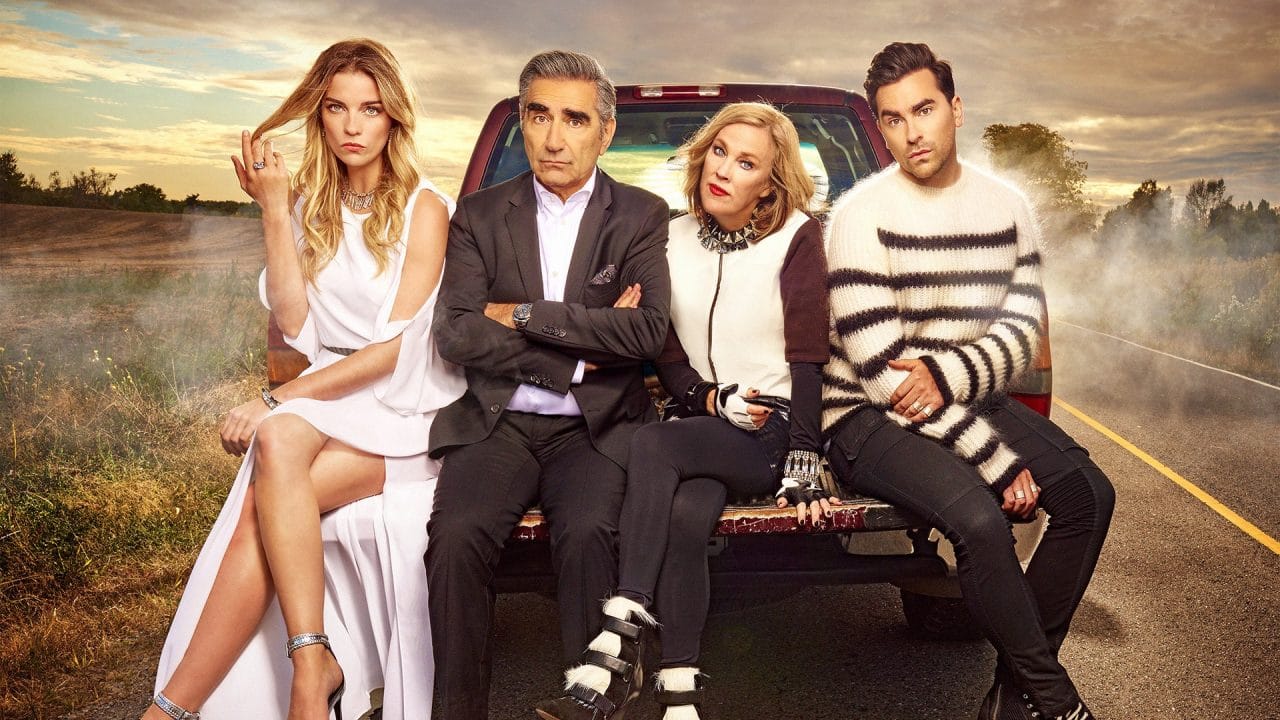 I think it’s fair to say Schitt’s Creek is the Breaking Bad (2008 – 2013) of the comedy genre. Why? Think about this – it’s a show full of (mainly) established people who, for one reason or another, never got their major break, and the show became big (read: mainstream) only after a few seasons on the air. And you can also say that the longer it went, the better it gotten.

Schitt’s Creek is an outstanding TV show. But you have to be patient with it, as the first season is great, don’t get me wrong – I liked it. But it’s definitely very much used for setting up everything. So if you go into this show and expect to laugh out loud from the first minute, you might be disappointed. But here’s the thing, even when it took a few episodes for this show to start going, I have never minded. Because these characters (not just Rose’s family) are fun to be with from the very first moment, even if they are not “hilarious” from the first moment.

And that is because you can tell the creators of this show (father and son duo Dan Levy and Eugene Levy) put their time and effort into flushing these characters into life, making them human. That might sound obvious, but it really isn’t because this show is about the ultra-rich people who lost everything. That could have been an awful attempt to try and humanize these ultra-rich folks who are so far removed from reality it might not have worked at all. But leave it up to those two to make them somehow relatable and intriguing enough for us to care about them without it feeling weird.

Everybody in this show entirely nails their character, and this is the Schitt’s Creek ultimate “weapon”. It’s not (just) about the humour (and there is plenty of that). Schitt’s Creek might be one of the few comedic shows where the humour almost feels accidental, and it’s all about our characters. Mainly their growth. And what growth it is.

It feels weird to single out one performer in this ensemble cast. But in my eyes, there is one character that undeniably grows so much you won’t recognize her when the show is over. And that is Annie Murphy, aka Alexis. When the show starts, she is by far the most obnoxious character, the ultimate “fish out of water”, spoiled princess type of a person. But, throughout the six seasons, her story and character arc go through so much believable growth you will be amazed, especially if you watch a clip from the first season and compare it to the end. And here’s the most genius/believable part about her character’s growth – underneath all of that, she feels like the same character, Alexis. But she acts like a different person altogether. I know this might sound bizarre (same, but different?) but let me explain. For me, what was the most astonishing thing about this show was all the character development without changing “the core” of their personas. So Annie’s Alexis still talks in the same way, still has the “I had really different upbringing” stories she has had since the beginning, but she’s no longer clueless, removed from reality and doubting herself. She’s a more empathetic, a kinder person who can function on her own she is not relying on anyone but herself without acting like a different person.

I hope I am making myself clear because that is what many TV shows don’t do as well as Schitt’s Creek. On occasions, you might not even recognize a character towards the end of your show because not only they are different, they act differently. And that sometimes might go against everything you knew about the person – they might talk differently; their mannerisms have changed because they’ve changed, and that’s not always how it is in real life. If you grow as a person, that doesn’t mean you suddenly start talking differently. It simply means you are better prepared for the next stage, equipped with everything you’ve been through to face the next challenge(s) of your life. And that is what I admired about Annie’s character on this show – underneath all her change, the “good old” Alexis is still there. The way she talks, the occasional remark “I know famous and rich people” – that will always be part of her because that is part of her core, soul, whatever you want to call it. But those things didn’t make her the “disconnected” character from season one. Those were mere personality traits, but that was all she had to offer. As opposed to the end of this show, those traits are still present, but those are no longer everything she got going for her. She is a much more complex person, but most importantly, it feels earned.

I could write a few paragraphs for all other characters on this show as all Rose family members go through something similar. They never change who they are throughout the show. You can tell Moira (played by the phenomenal Catherine O’Hara) will continually mispronounce words, and her accent will be unidentifiable at best (her “BÉBÉ” gives me everything I didn’t know I needed). But she is also a changed person after the six seasons of this show. However not changed enough where you wouldn’t recognize her completely. And that, to me, is undoubtedly phenomenal writing.

And that is precisely what you get if you watch this show in its entirety. An unbelievably witty, charming, optimistic and funny show that will make you laugh in one scene just for you to tear up in the next one. I admired the writers approach and making this show with no “villain(s)”. Sure, there are some “wicked” characters here and there, but there isn’t anybody that would stand out. And every time you feel like something like that might be coming (this show deals with a lot of LGBTQ+ things), the show always manages to surprise you, and it takes a different route altogether. And yet, it never feels preachy or exhausting, something that could have undoubtedly happened. That’s because the show knows how to balance everything – from making you laugh to understanding a few things you might have not before (David explaining his sexual orientation with wines as props was sheer brilliance).

Overall, Schitt’s Creek started modestly and finished with the loudest bang in television history – winning nine Emmys in one year. All four main actors, writing, the best show… essentially you name it, they won it. And deservedly so. I could easily see this show going on for an additional two to three years, but they knew to stop at the top. And that’s how Schitt’s Creek joined in my eyes another “royalty” TV shows that never overstayed their welcome (for my money, The Wire (2002 – 2008) and Boardwalk Empire (2010 – 2014) are the top two that come to mind instantly) and managed to finish at the very top of their game. And that is not easy by any means. I can see myself re-watching this show and this becoming my to-go happy place kind of show, where you can go in and out of an episode so easily. If you haven’t yet, give it a chance.