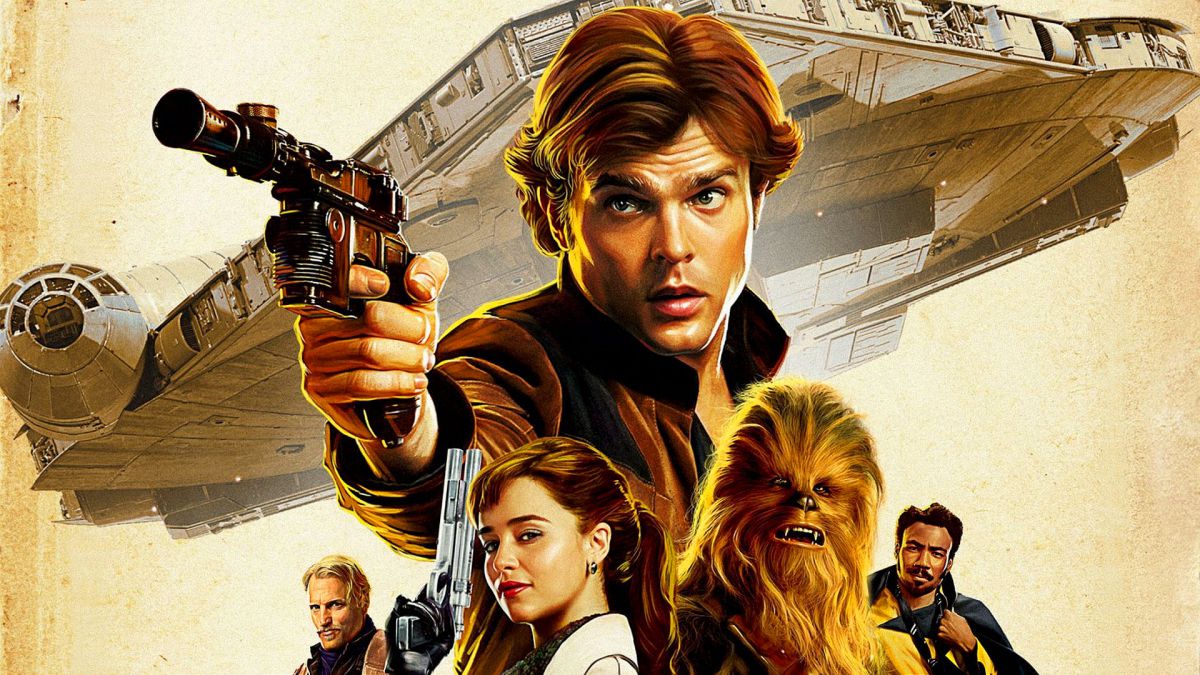 Where to start with this one…

Probably with bit of a context – this movie seems to have been cursed from the very beginning – it was coming out only a few months after the most divisive Star Wars movie ever to date, it’s an origin story of a really beloved character, where people were not that convinced by the casting choice (more on that later), and of course, the now infamous saga about firing the original directors duo (Phil Lord and Christopher Miller), replacing them with Ron “I’m the safe choice” Howard to re-shoot 80% of what Lord & Miller have done and they were “weeks” from being finished shooting the movie… again, because of this movie, I’m actually starting to believe in curses, as everything was going against this movie.

It’s almost a miracle that the movie is still somehow watchable, to be honest. People in their reviews focus on everything that’s bad with this movie, but given everything that’s happened with this film’s production, I want to raise a different question – shouldn’t we be thankful, that at least what we’ve gotten was watchable and entertaining enough?

Solo is definitely the weakest of ANY Star Wars movies so far, that’s for sure. The plot is fairly predictable, plenty of things are just a pure fan service, that simply don’t work if you overdo them as much as this movie has… I’ll give you one example – the fucking dice. I am a big Star Wars fan, and not once I’ve noticed those dice in any of the original movies. I was honestly puzzled how much this movie focused on such a silly prop, as I guarantee you only 1% of Star Wars fans did appreciate that.

The casting choice of young Han, was for me, the highest point of this movie – Alden Ehrenreich has convinced me by the time the movie was over, as he got the mannerisms of Harrison Ford nailed, and he kind of looks like him (if you squint your eyes, take a few shots of fine whisky and then you squint your eyes again). But seriously, it’s not about the looks, he took this what was essentially a doomed job (nobody will be 100% on board with you playing a younger version of a character, let alone a character who is so beloved by everyone) and turned out a solid performance, where if he didn’t deliver, this movie would’ve sunk even lower.

The next paragraph will contain some SPOILERS!

The rest of the cast was decent, only person who actually stood out a bit was Thandie Newton as Val, but don’t get too attached, she dies quickly. Everybody else around was just a different blend of “alright”, where they weren’t bad, but weren’t great too.

And this is the main issue with this movie – after everything the production had gone through, what they have delivered is… just an alright movie. You can’t say it’s bad, as it does have some moments, but you can’t say it’s great, as it is not. I would honestly want to see what Lord & Miller were planning, according to this article, their vision was bit darker and less on the fan service side, which to me sounds pretty great. I’d rather see somebody try something totally different and fail spectacularly, than having a mix of great and not so great in one movie, where the end result is… alright. You will feel indifferent, and couple of days later, you can’t even remember what the movie was about, or the fact you’ve seen it.

My rating is slightly skewed, as I am a Star Wars fan and always will be, so if you are not, feel free to deduct one * from my final rating, as objectively, Solo is as average as average gets. I’d honestly hope Disney took a giant step back, the producers got back to drawing board and try to figure out how to make new, better Star Wars movie, not relying on the old ones. One sure thing that wouldn’t hurt, is to BELIEVE THE PEOPLE YOU HIRE TO DO THE JOB, DON’T FIRE THEM HALFWAY THROUGH THE PRODUCTION! I’m sorry, it makes zero sense to me. According to the latest news, they MIGHT be on the right track, I’m sure hoping they won’t fire him halfway through too for being too weird. Especially after the The Mandalorian, where he directed the last episode, in Taika I trust.

That’s all for Solo! What did you think about it? Let me know!