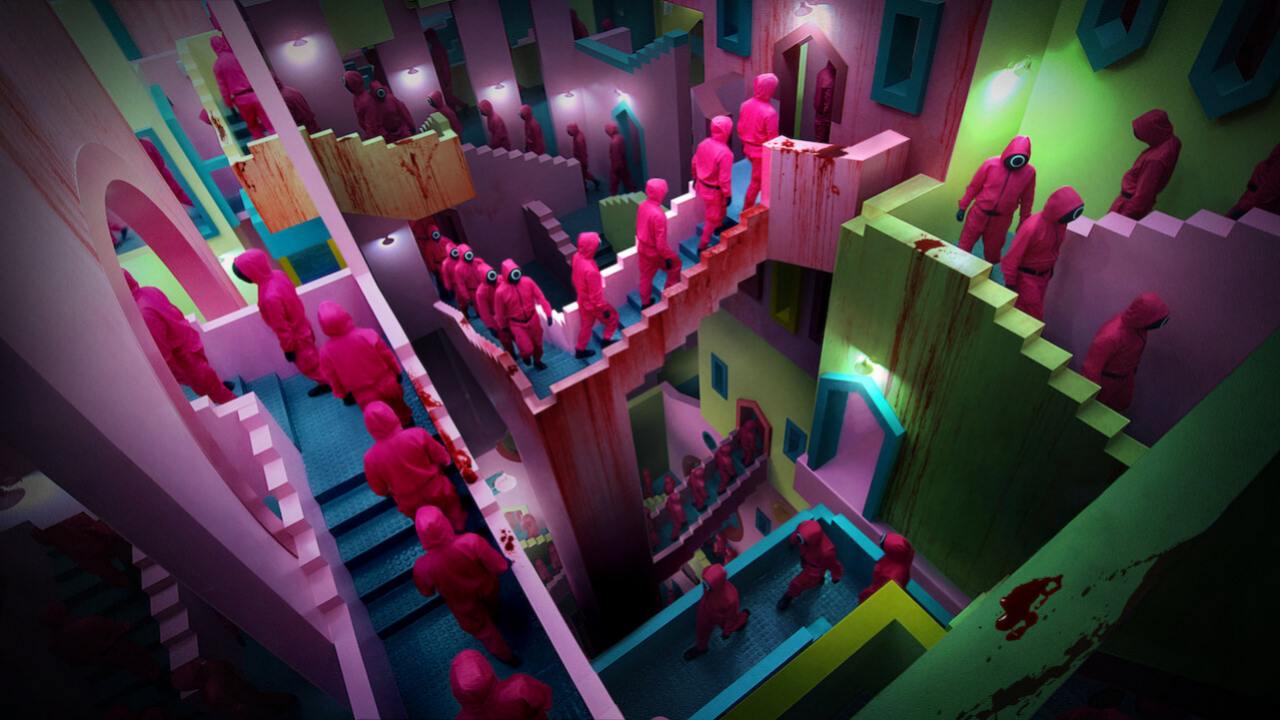 As the old joke goes: “Squid Game. Squid Game is everywhere. I open Twitter – Squid Game. I open YouTube – Squid Game. I’ve bought a tin the other day. And I am afraid to open it.” So after this hilarious and pretty old joke that can be used for anything that’s currently trending, let’s talk about this show. For the past month or so, it was impossible to escape it. It seemed that everybody in my immediate surrounding was talking about it (friends, colleagues). I have seen countless memes about it (because that is one way, how you know what is currently hip and trendy, people immediately turn it into memes), so I have finally cracked. I had to see it for myself, what the hype was all about.

I won’t lie, from what I have heard, it seemed like Battle Royale (2000) that is an excellent movie and well worth watching, by the way, but instead of school kids being kidnapped and taken to an island to fight for their survival, it’s poor people now. And as far as over-simplifications go, it’s pretty accurate. Except, of course, not really, because there is so much more. Sometimes a bit too much for its own good. But I will get to that.

Squid Game definitely took some “inspiration” from existing properties, and the creator, Hwang Dong-hyuk, managed to put his unique twist on it. I liked the concept; I enjoyed the performances and the message/parallels about society, the class system. But I couldn’t help but feel that this show sometimes went a bit too much into the “let us explain this to you clearly, so you understand the message here”. Especially in the VIP episode, I understand what the intention was, what the show was trying to highlight, but sometimes a whisper is louder than yelling. Also, I couldn’t shake the feeling that the longer the show went on, the more predictable it became.

I think you know where this is going; I will have to discuss some spoilers, so before that, let me just say this. If you are like me and it takes you a while to watch the “trendy” stuff, give Squid Game a go. I would 100% recommend watching it in Korean with English subtitles, as from what I have seen, the dubbing is awful. So, with this out of the way…

Let’s talk about the “twisty” nature of this show. In the second episode, where the survivors of the first game vote to leave, I didn’t expect them to vote to leave. It felt like a Brexit referendum – it was really close, it ended surprisingly, and, predictably, it still led to a disaster. Politics aside, I enjoyed that decision. Even though I knew we had to come back, it was interesting to see how many people managed to change their minds and came back when invited back. That was the first difference between this show and any other property dealing with “a bunch of people killing each other for a big reward”. They were given a choice to leave, and they left no strings attached. And yet, when they had the time to think about the reward (as the show states), 93% of people came back to compete, fully realising what they were in for. Even though the majority voted to leave at that moment. I liked that aspect.

But I felt like that was the last “big” surprise of this show. And not for the lack of trying on their part, definitely not. But the more complex the story has gotten (organ harvesting? VIPs? Looking for a brother?), the more predictable those twists and turns became. I didn’t mind it too much, as I still have enjoyed the show overall, but it sometimes felt like the creator put himself in the corner, and the only way he knew how to get himself out of there was via cliches. For example, I could do without the entire “Where is this random policeman’s brother?” storyline. And don’t even talk to me about the reveal who the Front Man was or the fact our policeman is not dead. That wasn’t confirmed yet, by the way, but I am telling you this as an avid TV/movie watching person, I have not seen a character to be “fake dead” like this in a long time.

The concept itself – “let’s make poor people play kids games, but if they lose, they die” is intriguing, as some games, we can all relate to (marbles, tug of war) and some, like the squid game itself, is… to be honest, I still don’t fully understand what is so appealing about it, but I think I get it…? Anyway, it’s not about the games; it’s about the metaphors. It’s about the age-old (or however many decades it’s been since we’ve invented currency and a proper capitalism) question: “How much would you sell your soul for? Would you kill or participate in an activity that kills others if it meant you’d be rich? Of course if you are “lucky” enough to survive?”

Because underneath all the games, all cliches, I believe the universal appeal of this show is how much we believe in ourselves. Respectively, in our inept goodness and that we would have made the correct decision. That we, faced with a massive amount of money in our faces, would have done the right thing. I can see a lot of people watching this show, asking themselves: “How much would it take for me to end up like this?” Because it’s easy to discuss morality, laws and all that good stuff from the comfort of your couch, in your flat, house, where presumable, you have heating that’s working, electricity, and your basic needs are met. And that is why I was surprised by the ending. Not so much about the “who was behind it” bit, but the fact the “good guy” won.

If you think about it for a moment, Squid Game presents a world where evil people come on top. A world where if you are good, that is great and all, but people will take advantage of you (see Ali’s character played by Rama Vallury). He was on the “too good” end of the scale, and that got him killed. So it would make sense for this show to have a darker ending. The ending that should have happened, in my opinion. Where the last two guys are fighting, everything happens precisely, as it had in the show, except Park Hae-soo‘s character doesn’t have the sudden change of heart. He takes the knife next to his head and kills Lee Jung-jae‘s character. As I believe that would have happened. Would I love it? No, but yes. Because that would make the most sense in the world and the story we’ve been presented thus far. And most importantly, it would be in his character.

Because this show managed to do one thing absolutely perfectly, and those were the characters – throughout the entirety of the show, you love people, you love to hate others, but even with them, you could see why they would act the way they had. And Park’s character had sacrificed his soul (or morals or whatever you want to call it) long before that fight. I know why they went with the more “viewer-friendly” ending because it ties everything up nicely with a bow and the scene in the very last episode with the drunk guy and whether somebody would help him. What I am trying to say is this – I honestly believe there are genuinely amazing people walking among us every day. Selfless, helpful people who want to make this world a better place. But this “change of heart” of this particular character… I just didn’t buy it. Within the show, he would have taken the opportunity to kill his friend; he would take the money and then try to be better, maybe use the money for charity purposes to make himself feel better, justifying the choices he’s made.

And I guess this right here – this is why Squid Game became such a phenomenon. It gave us something interesting to talk about, to examine one’s morality, our thoughts. Because here’s the thing – I know people will disagree with me, saying how I didn’t understand what this show is about, how I am wrong about Park’s character etc. And this, to me, is a fascinating debate. I can’t be wrong because I can’t be right. There is no right or wrong answer here. It all goes down to whatever your moral compass is set to, what your core beliefs are. Everything plays a part. Your upbringing, your experience… kind of like in these games, right?

Overall, Squid Game managed to do something I was positively surprised by. It managed to deliver on a massive hype. I tried to approach this show with no preconceived notions, as that is not the best mindset to see something that’s supposed to be “the best thing ever since the sliced bread”, even though that was difficult, as it was literally everywhere around me. What I have gotten was almost a perfect show that provided me with something new-ish to think about, offered me some cool visuals, and left me wondering about morality, humanity and all that good jazz. My only complaint was that sometimes, the less you tell us, the better and the more I think about how the “final game” went down, the more I am convinced the show should have had the balls to make the “antihero” the real winner. It will be interesting to see whether this will get any second season, what that might look like and more importantly, how it will be received. For my money, I wouldn’t be mad if there was never any other season. Sometimes, less is more.