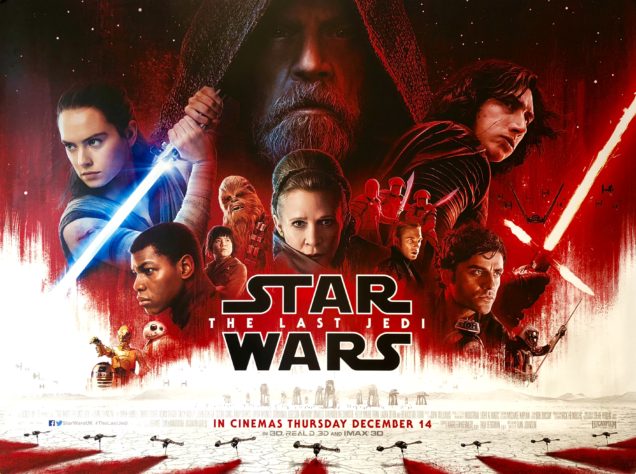 All the Star Wars movies we’ve had a prior to this one, had one, almost unique attribute – there was a general consensus about each one. Think about it – you can say that on the average, people agree the Empire Strikes Back is the best one, people tend to agree The Phantom Menace is (or now was, I guess) the worst one and everything in between varies, but for the most part, there was an “order” to all the movies prior to this one about where they “belong” quality wise.

As with The Force Awakens, I went to see this movie at midnight, day before the official premiere to avoid any spoilers. I remember being so hyped about it, I remember wondering what we will learn about Rey, how her training with Luke will go, you know, the usual stuff. And what I’ve got was something so different, I didn’t know what to think of it for the longest time. And I wasn’t alone in this, not by far. I knew I really liked parts of it, but also wasn’t convinced about the other parts (the entire fuel thing, casino planet), but I knew it was a really solid Star Wars movie, that was beautifully shot (hate it or love, this is the best shot Star Wars movie to date, and that’s a hill I’m willing to die on) and I thought this might not go over well with some people. But I had no idea what was coming over the next couple of weeks, when more and more people were seeing the movie.

There was something that struck nerve with plenty of fans with The Last Jedi, that it quickly became almost 50/50 movie, where one half LOVED it and is willing to defend until they die, and the other half HATED it and considers it the worst thing that happened to Star Wars since… well ever! Alright, without sounding like Donald (you know who I mean) let’s look at this movie and see whether both sides are right.

The Last Jedi is directed by Rian Johnson. If you are familiar with his style, you’d probably know he loves to think of new ways to do basically everything, to subvert everyone’s expectations and that’s what ultimately pissed off (what seems to be) half of the fandom. It almost feels like he didn’t care this should’ve been a middle part of a trilogy, he’s done the movie he wanted, where he tried not to dwell on the past, but forge his own, new way, but still within the laws of the universe. That is if you’re up on your comics, and different Star Wars antiques, where you need to know almost every single detail about the Force for what Leia and Luke do in this movie to make sense. And I think this might be part of the reason why some people got angry – he overestimated majority of Star Wars fans, where for example, I count myself as a big Star Wars fan, but I had no idea you can use the Force to protect yourself in the space and turn into a space Superwoman, or project yourself onto a different planet and still react with the environment.

The other things people tend to complain about when comes to The Last Jedi, is the entire trip to the casino planet where it seems to disrupt the flow of the movie, and the fuel thing, where one ship goes just fast enough so the other, much bigger ship can’t catch up with it…? Really? Also the fact they just killed Snoke without us learning (at least in this episode) who he actually was, made some people really angry. These things are the most talked about negative points and to be fair, I understand why. Especially the fuel thing seems to be slightly silly.

Let’s go over some positives – the entire “red room” battle, where Rey and Kylo join forces for a few minutes and deliver what might very well be the best lightsaber fight of any Star Wars movie, was really well done, shot, executed. My hat is off. The sacrifice the Vice Admiral Holdo (played by Laura Dern) makes where she does something we’ve NEVER seen in any Star Wars movie was also breathtaking (even though, they could’ve just let Poe on their plan, plenty of other issues could’ve been avoided) and the Luke versus Kylo Ren fight at the very end, was great on its own, but the twist… definitely really cool moment too.

I’ve recently re-watched this, for the first time since I’ve seen it in the cinemas, and was hoping it would help me establish where do I stand with this movie (prior to that, I was around 4*). I can definitely say now, without a shadow of a doubt, I belong to the first group of people, where I love the movie, as the things that bothered me too while watching it for the first time (fuel and casino planet mainly) didn’t bother me as much. I’ve watched it alongside my girlfriend (first time for her with all Star Wars movie, was introducing her to all of them) and her immediate reaction after this movie’s finished was “Fucking hell, why would anyone hate this movie?” and I think I know the answer.

I remember after The Force Awakens, the general consensus was “it’s a good movie that sets up plenty of things, let see how they pay off” and then everybody and their dog started to post their own Star Wars predictions, theories, what the next one will be about, every time there was a new trailer, people would pick up on one split second of a random footage and hyped themselves with “This confirms I might be right and we will see this, and this and that!!” and to a certain extent, made up their own “perfect” sequel in their minds before seeing this one. Is there any wonder, that after they’ve watched The Last Jedi, something so drastically different from what they’ve expected, they were not only let down, they were pissed that the movie wasn’t everything they theorised about? And even though I wasn’t pissed about this movie, I felt this too. I was slightly disappointed because it didn’t give me the things I wanted it to. But now, after the second viewing, I’ve let go of what I wanted and tried to accept the movie on its own terms and that’s where I realised it’s actually a great Star Wars movie, that just tried to be different, against all odds. If you think about it, this is exactly what this movie is about – letting the past go, make a new way for new stories and characters.

But this is a typical Star Wars fandom for you – do something ordinary (like a copy of A New Hope) people will tell you “We’ve seen this before, give us something new!” You do something nobody before you even attempted to do in this universe and the same people will now shout at you “No, this is TOO different, make it Star Wars again!” You can’t win. Speaking of Star Wars fandom, let me just talk to the what I hope is a really, really tiny bunch of them, please stop harassing people (mainly woman like Kelly Marie Tran) for being in a movie you don’t like! It’s one thing not to like a movie, it’s completely other thing to be poisonous to the point where she needs to delete her Instagram account (link for this unfortunate news is here).

Back to the movie – as mentioned before, the second viewing really helped me make up my mind. Are there (still) things I might not agree with 100%. Yes. But am I able to enjoy something new, that feels fresh, and be glad about having a really unique and cool looking Star Wars movie? Also 100%. After seeing The Rise of Skywalker my only big gripe with this movie is they could’ve at least hinted at what/who’s coming as the “big bad” in the last one… but more about that tomorrow.

That’s all for the most controversial Star Wars movie to date. What did you think of it? Let me know!