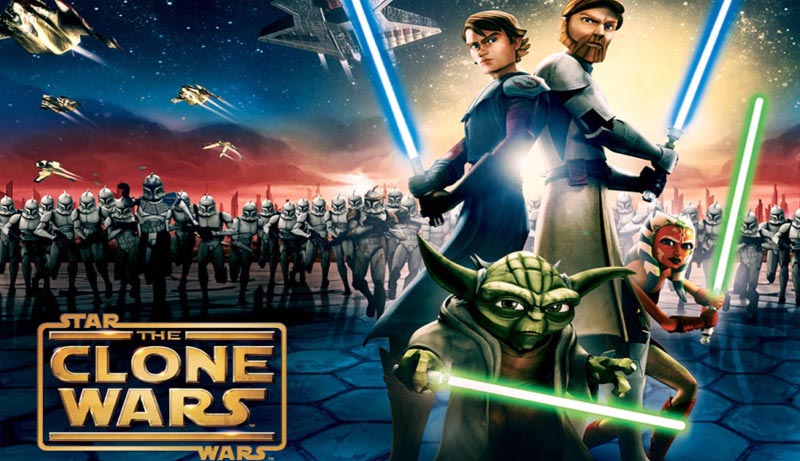 I remember watching this movie back in 2008 and thinking it was the most average Star Wars film I have ever seen (the fact that didn’t change even with the sequel trilogy being made since then, which is weird considering the “passion” around Episode VIII, as I’ve written about here) and re-watching it now, before starting The Clone Wars TV show, nothing has changed, really.

I think the movie suffers because they were just simply trying to do too much at once – establish the story, introduce new (and based on what I’ve read so far, prominent and one of the most popular) Star Wars character Ahsoka Tano, setup the TV show that premiered shortly after this movie, trying to tie this in between Episode II and Episode III… I mean, I am getting dizzy just trying to write all of this, let alone trying to actually do it!

The Clone Wars has a solid start, even though it takes you a while to get used to the unconventional animation, but it grows on you. Then the movie takes a strange turn, where suddenly it becomes a rescue operation about Jabba the Hut’s son… and everything after that feels misplaced. That plotline is definitely the most boring one, as it doesn’t work and makes Ahsoka into almost annoying teenager and I understand we kind of need to see that, but that doesn’t make it any less annoying. And then we have the ending, where about 20 minutes before it’s over, there is a surprise twist with a character we HAVE NOT SEEN for the entire movie, so their only purpose is being the “twisty” surprise, that doesn’t really work, if we didn’t even know this character existed.

That’s the main issue with this movie – if you read the trivia section on IMDb, you will learn these were meant to be 4 episodes from the Clone Wars show, that got “stitched” together and unfortunately, it shows as they don’t jive together at all. This whole movie feels disjointed, where you might have some cool action scene, just so after that you have 10 minutes of nothing. And then you have another cool scene, just to be followed up with something, that’s trying to be funny, but it’s not really. That was the main reason I have not watched the TV show until now, as I’ve just presumed the show will be more kids oriented, as this movie felt, so not for me. Only recently I’ve discovered, the show is NOT kids oriented and also actually great (apparently), much better than this movie, so I’m giving it a shot (so far I do like it).

Here’s the thing, this movie only happened to get people excited about the show, and if we are going to judge it based on that, it would’ve been a straight F, for fail, as this was the only reason I didn’t checkout the show when it was airing. But, I am not going to judge this movie based on that, as I don’t think it’d be fair. All I am going to say is, if you are a Star Wars fan like me, you will find a few things to like about this animated movie. Just make sure you don’t get your expectations/hopes up too much, as this is a bit of a mess.

But don’t let this movie discourage you from watching The Clone Wars show, and if decide to watch it, make sure you watch it based on the chronological list of episodes, you can find here. Luckily, I found this list right after watching the first episode of first season, so I am now watching it based on this list. If you are planning to watch the TV show for the very first time, I’d recommend the same, as mainly the first almost 3 seasons were presented as an anthology series, meaning they don’t necessarily follow chronological timeline, which I’d imagine confused plenty of people, me included.