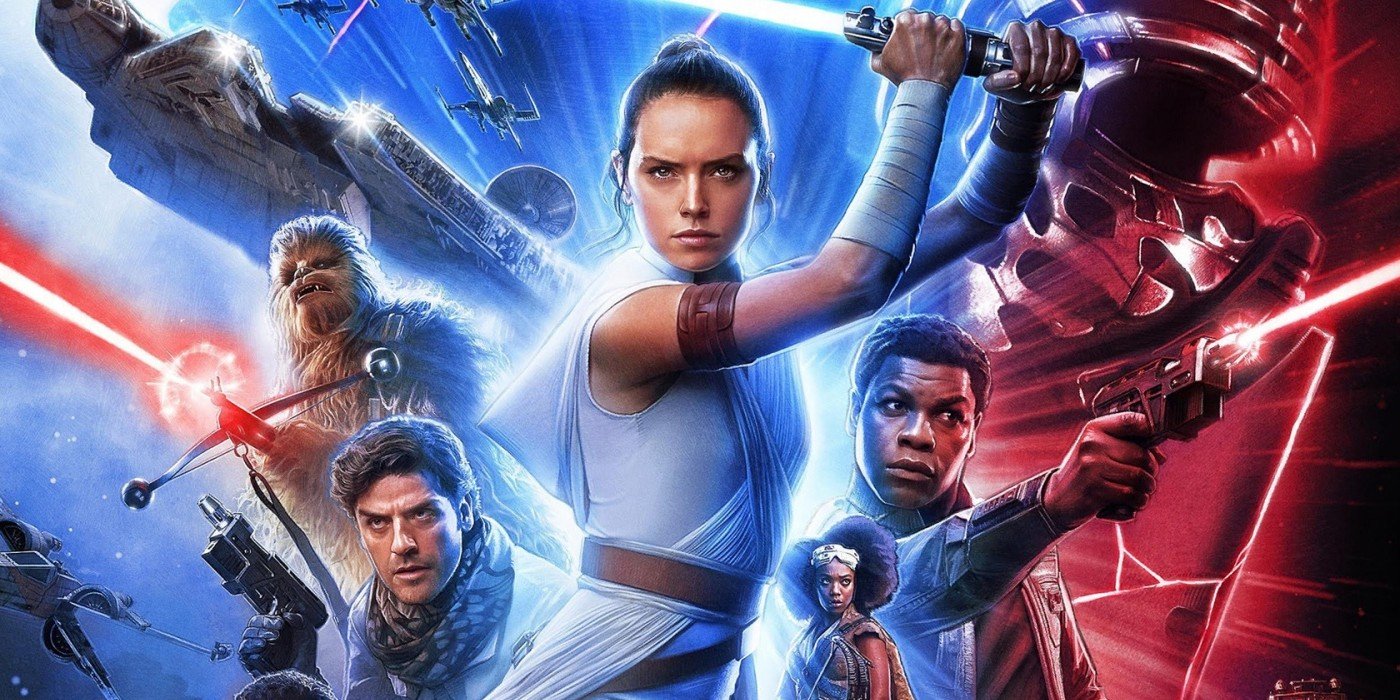 It’s impossible for me to discuss this film without jumping into spoiler territory straightaway, so…

The following WILL contain spoilers for The Rise of Skywalker!

This is where the new trilogy stumbles for a bit for me. Don’t get me wrong, mainly the ending will probably hit you in the feels, but the two main plot twists of this movie feel rushed and really disjointed from the other two movies.

If this was truly studio’s and J.J.’s goal from the very beginning, why not give us some clues on the way? Why couldn’t we hear the message that was available through… I can’t believe what I’m about to write… Fortnite event (video below for the unaware) half way through the Episode VIII? Or maybe at the very end, just imagine this, before the end, where they have each other and hope, suddenly, we hear Palpatine with this message, credits start to roll. That’d at least establish him being back a bit more, it would give us, the fans, time to make peace with this fact and start talking how and why is he back and it wouldn’t feel as rushed!

Because that’s how The Rise of Skywalker feels like – after the massive divide the previous movie managed to do, it feels like something like this happened at Disney’s headquarters:

Disney’s BigHead: (Sitting angrily behind his desk, with a suspicious white powder mountain in front of him) “Fuck, people are pissed! Quick, who can we bring back to be main villain, especially now since we’ve killed Snoke?“

Young, unpaid intern: (Speaks not as sheepishly anymore): “You know, Palpatine? People seem to like him and last time I’ve checked, Ian McDiarmid is still around.”

Disney’s BigHead: (Continues yelling, while the suspicious white powder mountain in front of him slowly starts disappearing:) “Didn’t we kill him back in 1983? I swear to God, fuck off before I-“

Young, unpaid intern: (Interrupts bravely, voice slightly quivering): “He was the ultimate evil, you know. We can explain it like that. Or that he was a clone, or maybe-“

Disney’s BigHead: (Interrupts intern’s interruption, yelling, the suspicious white powder mountain has completely gone:) “Fuck it, that will have to do, we have a date we need to stick to no matter what! Give me J.J.!“

Just for legality sake, I DO NOT CLAIM THIS HAS ACTUALLY HAPPENED. (One can never be too careful these days).

That’s how the Palpatine revelation felt like to me – and this is why when I re-watched all the Star Wars movie, it struck me that even the prequels, no matter their weaknesses, knew where they are going. This trilogy seems like there was a battle between J.J. Abrams and Rian Johnson and I just wish no matter who’d win, they’d given them the complete control of the entire trilogy.

I’d rather have a trilogy that where:

It also would be great if somebody had actually spent some time on planning and planting clues about potential big bad coming back and also, the fact the main heroine is… his granddaughter.

Yes, let’s talk about Rey being Palpatine’s family. If you make peace with Palps being back, it does make sense, in a really twisted way and also doesn’t undermine any characters from previous 2 movies (like when Kylo Ren told Rey in The Last Jedi her parents were nobody, he was technically right). But again, how cool would it be if we had some breadcrumbs throughout the last two movies, that could’ve led us to this, even without Palpatine being there? How cool would it be if we could re-watch the entire new trilogy now, and pick up on tiny details where we could say “Oh yeah, they WERE setting it up from the very beginning!”

Sometimes it feels like people in charge of big Hollywood studios should only stay in charge for maximum of 5 years, as there seems to be a disconnect between the studios and moviegoers about what constitutes “a great movie”, let alone “a great movie trilogy”. It’s almost like there is a confusion about what people actually enjoy, what people want from movies, and what do the studios think we want/enjoy. We don’t need twists (especially if they don’t make sense, or you need to read a comic book or watch a YouTube video for a video game to understand why is something happening), we don’t need characters, who’ve been dead for almost 40 years in a movie franchise, to come back for one last hurrah! Just hire creative, young(ish) people who haven’t been part of the same company for as long as others, so they can still see things as fans, from fresh perspective and deliver us a great story with beginning, middle and end.

I apologise if this review doesn’t really give you a much about The Rise of Skywalker, but it’s hard for me to talk about why this movie doesn’t connect with me fully, without mentioning its place in this trilogy. Because on its own, I still liked it, very much. It’s still Star Wars, so I do have a soft spot for it, the ending where we see all the ships coming against the First Order gave me chills, Rey fighting Palpatine alone and alongside “turned” Kylo was also great, her hearing all the Jedi’s who now live through her… The pieces are great! The movie as a whole doesn’t work as well I am afraid.

Is this movie bad? I would say no, it’s still worth seeing. Does this movie completes the sequel trilogy? Barely, because it has to. As many people (rightly) pointed out, the first 40 minutes or so feel like a game speed run, where we NEED to get places fast, to propel the plot where we need it, ASAP! But dammit, it still has some great scenes.

That’s all for the last of the “Skywalker Saga”? What did you think? Did you like the way the sage ended? Let me know!