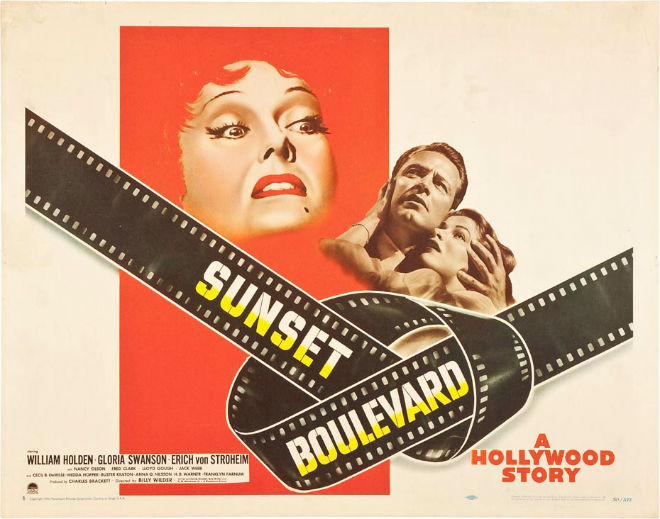 There are movies that don’t age at all, at least when comes to the story and its themes, and Sunset Blvd. is one of them. You can read this movie in two different ways – on one hand, it’s dealing with stars of the “silent area” not being in the demand anymore, on the other, it’s also dealing with the idea of age (mainly for women) in Hollywood and how one day, you are at the top of hill, just for you to end up down at the bottom the very next day, with little to no warning.

And in 70 years since this movie’s release, not much has changed. We still hear actresses of “certain” age groups complaining, how this system is still very much in place, because in Hollywood, once you hit a certain age, you are no longer commercial, you can’t be sexy, audience knows you so well they are bored with you… at least that’s what they tell you.

Sunset Blvd. is also commentary on a few another things – how women back then (and maybe even now?) needed to have a man in their corner to get something done, even though they might be more talented than the man in their corner. It’s also asking us to consider something, that’s universal – how much is your life/soul worth? Would you “sell” yourself for living in a golden cage, being taken care of, but you’d still be trapped? Is there a price on person’s dignity? These are all universal themes that have been explored numerous times since 1950, but it only shows how much ahead of its time this film truly was.

I really liked that the movie explores the dignity part so well, by showing us two different angles to this – on one hand, we have the young writer, who doesn’t mind the money, but he knows this isn’t for him. On the opposite side we have the butler/ex-husband, who’s devoted his life to his ex (now boss) and who’s trying to make her feel like she’s not forgotten and she’s still in demand, wanting to help her, not realising it’s the worst he can do for her. He’s already “sold” his soul to her, even though he can’t see it.

I’ve forgotten how much “meat” is in this movie, as in today’s pop-culture, Sunset Blvd. is mostly remembered for the body in the pool opening scene, the narration and Gloria Swanson‘s performance and a few iconic lines (“I *am* big. It’s the *pictures* that got small.” or “All right, Mr. DeMille, I’m ready for my close-up.”) But what I don’t hear discussed as much is how much there is to chew on in this film. So many different themes, so many different topics, all covered (especially for that period) really well.

If you haven’t seen this in a while, I’d highly recommend a re-watch and I think you’ll find that the movie aged really well and even though it’s been 70 years since its original release, it’s as relevant now as it was back then. There are still people who are more than willing to be trapped in a golden cage, so they don’t have to work day in their lives and there are still people, who overestimate, how famous (or how much influence) they actually have.

That’s for this one! Did you see it? What did you think about it? Let me know!