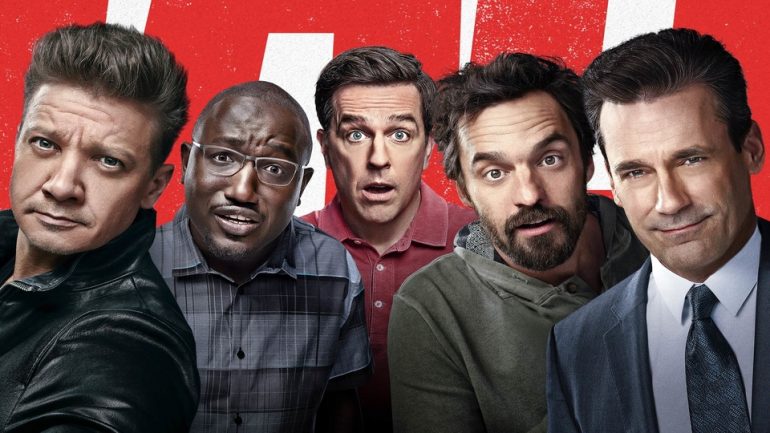 How to write about a movie, that’s based on an idea of grown men playing the game of Tag and going to extreme lengths, where they seriously play it, no matter what’s happening around them?

The premise of the movie is really intriguing, and the movie as a whole was quite a pleasant surprise, where the only problem is I wasn’t laughing nearly as much as I should have. Most of the jokes didn’t really work for me, as it was the stereotypical American comedy, we are all (or at least me) so used to by now, where everything is lined up for you, so most things won’t surprise you. What actually surprised me though, was the fact I didn’t mind not laughing, as the movie itself was actually entertaining by itself and the cast had a great chemistry.

What I found fascinating about this movie cast is the fact that there is a clear standout, but it’s not one of the main (guy) characters you might expect, like Ed Helms, Jon Hamm or Hannibal Buress (where the last one is a proper stand up comedian!). They were all good, don’t get me wrong, but for me, the one who stole this movie is none other than Isla Fisher – her character of Ed Helm’s wife, who’s “too intense to play the game, even if girls were allowed to play it” was hilarious and she had by far the best line in the movie: “Suck my tiny ginger balls!“. That was the only moment I properly laughed out loud, as it wasn’t just unexpected, but also her delivery was on point. Ok, sorry, but I need to rant for a bit (again).

I desperately want for somebody to give Isla Fisher a proper leading role, not the role of being “somebody’s wife” – she’s proven time and time again, she not only has the acting and comedic chops to steal a movie or two, but she’s charismatic, charming and actually funny! Please, somebody cast her in a movie where she’s the MAIN character, so she can truly spread her wings and fly.

For the most of the movie, I was thinking about rating it, as I wasn’t sure about it at all – it wasn’t hitting me as a comedy, I had a good time with the movie on its own, but couldn’t feel the “heart” as the movie wanted me to. That was until the last 20 minutes or so, where something that I have not expected happens and that, plus Isla Fisher, elevated my rating slightly above average, where I finally gave in, maybe bit later than the movie wanted me to, but at least it get me for a tiny bit.

Tag isn’t a bad movie. It’s an interesting story (albeit a fictional, if you wan’t to know what’s real and what is not, here’s some details about the actual people this movie is based on) that keeps you engaged, but if you go into this movie expecting barrel of laughs, don’t. And if you are looking for a modern comedy where you can actually laugh out loud more than once? I’d recommend either Blockers or even better (and this might be one of the best comedies of the last decade) Game Night (both from the same year as Tag).