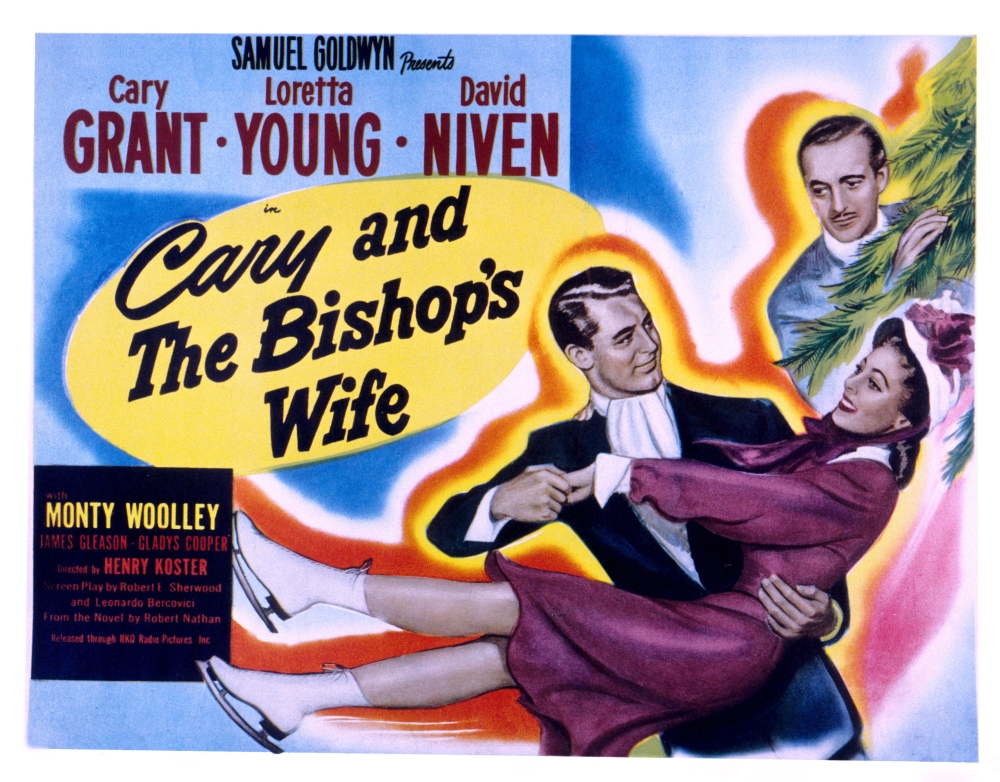 If not the first, The Bishop’s Wife is certainly one of the first movies you can tell they made, because something really similar to it did great the previous year (yes, I am of course talking about It’s a Wonderful Life (1946)). I mean, it’s basically the same premise, except here, the angel (played by Cary Grant) actually comes down to help out a bishop with… well everything in his life.

As far as copies go, this was actually a decent one. The Bishop’s Wife is a charming movie, that has just enough beats of its own to keep you interested and the further along you watch, the more the connection between this film and It’s a Wonderful Life disappears. The main focus of this movie is more on the balance of having a meaningful life, but not on the account of your family, that is what the bishop has managed to forget and that is why we have Cary Grant’s Dudley coming here, to help him out with his work and his marriage.

But of course, as it happens in movies like these, even angel has feelings and manages to fall for Loretta Young, and who can blame him? I am not too familiar with her, but she looked charming in this movie, and she delivered a great performance, as you could feel that even though she still loves her husband, she just needs more from him. Although, I do need to admit, the final exchange between her and Cary Grant felt a bit weird, as he basically said if he wasn’t angel, he would try to do something (I guess break up the family, he’s just saved…? Dude, you know the heaven exists, you sure you want to go down that route?)

What I found fascinating is while reading through IMDb’s trivia section, I have learned not only that originally, a different director (William A. Seiter) was shooting the film, but once he was fired, Henry Koster replaced him and realised why the movie wasn’t working and swapped the roles of bishop and the angel. That’s right, originally, Cary Grant was playing the bishop and David Niven was playing the angel. Personally, I can’t imagine that, as they fit their roles so perfectly, it only proves Henry Koster made the right decision and also goes to show you never know. Sometimes, actors get a job and it’s not until somebody else steps in and tells you: “Hey, why don’t you try this role?” and then everything fits together nicely.

On the surface, The Bishop’s Wife might just seem like a “It’s a Wonderful Life wannabe”, but credit where credit is due, it’s not just that. This movie does stand on its own, and if for nothing else, you should watch it for the delightful ice-skating sequence, that was the emotional highlight of this movie for me. The only “negative” thing, and I am using the word “negative” very carefully, is it doesn’t hit you (or at least it didn’t hit me) emotionally as much as It’s a Wonderful Life hits me every time I watch it, and even the very first time. But should you still watch it, maybe around Christmas time? Sure, I don’t think you will be disappointed, especially if you are a big fan of Cary Grant or Loretta Young.