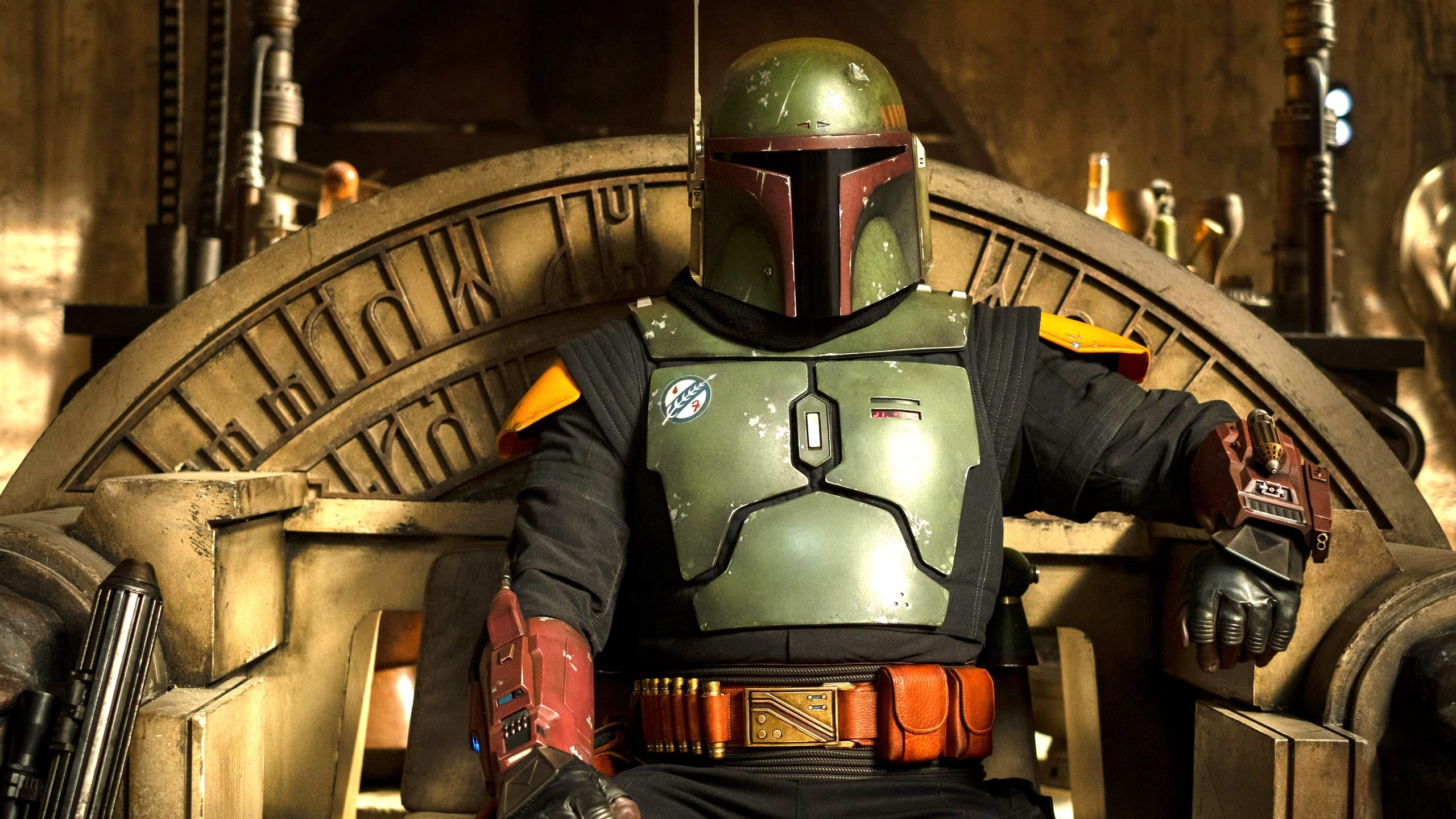 Let’s get something straight from the getgo – if you have ever visited my blog, you know I am a Star Wars simp/fan/enthusiast… whatever you want to call me, it’s probably a fair label. So take this review with a pinch of salt because I know I might be one of the few (based on what I am seeing around me) fans who was satisfied with this show. Yes, the first season has been a bit inconsistent at times, and you can argue that this show really takes off when it becomes something else for a bit (all will be explained in the spoiler tag), but I still think it’s worth your time.

The Book of Boba Fett is almost impossible to discuss without spoilers. If you have somehow managed to avoid any spoilers whatsoever, first of all, congrats! And then I would say don’t read any further and watch the show for yourself because if you managed to avoid some crucial moments being spoiled for you, you would definitely enjoy the ride much more.

Before going there, let me say why I enjoyed this show in the broadest, non-spoiler way possible. Firstly, the casting is superb. Yes, it’s great seeing Temuera Morrison as Boba Fett, but I would argue this show is as much his as it belongs to Fennec Shand, aka Ming-Na Wen. She’s more than just Boba’s sidekick. The show gives her a backstory, and in the final episode, she is the key player. We can see her do what her character has been hinted at throughout this show, and The Mandalorian (2019 – ?, my review for the first season can be found here, and for the second season here), and kicks some ass. And I can’t believe she will turn 60 (!!!) next year. If I looked like her now, I’d be delighted, and I am 30! Her character is most definitely the most intriguing one for me, and Ming-Na nailed it; you 100% don’t want to be in her way, as that will end badly for you.

Another non-spoiler thing I can discuss, and it is the biggest one for me, is the idea of a sandbox, where different directors are here to play around with “the Star Wars toys”. Just in this season alone, we’ve had a variety of directors from Dave Filoni, Robert Rodriguez (who is behind three episodes) to Bryce Dallas Howard, and you can always tell it is somebody different in charge for that episode. But, and this is the most crucial part, they all “feel” like Star Wars. Even though each director brings their unique vision to the table, it never felt out-of-place by any means. And this is why I was willing to forgive some choices that didn’t work I’ve seen others mention (biker gang or that big thing that happens in the middle of this show, I can’t discuss without going into spoilers). As for me, the idea of Disney bringing unique and talented voices to their sandbox and letting them play (seemingly) without any limitations is fascinating to me. Think about it like this – if I were to tell you 10/15 years ago we would be getting a Star Wars show about Boba Fett, you wouldn’t expect people like Robert Rodriguez or Bryce Dallas Howard to be behind the camera. They weren’t and still aren’t the “obvious” choices for this property. And maybe because of that, I loved what they brought.

One more thing I must mention before finally going into the spoilers is the soundtrack. We all know Star Wars have always had superb scores; even the main theme from The Mandalorian was great, but… The theme for this show hit me hard, and I absolutely love it. It’s so simple yet effective, it perfectly encapsulates this show, the character of Boba Fett, and it never failed to get me pumped for what I was about to watch. Ludwig Göransson and Joseph Shirley deserve all the awards for this soundtrack. For me, this is the best Star Wars theme music, possibly since the Duel of the Fates. I unequivocally adore it. And the way the music compliments the storyboard art at the end of each episode (I love they keep doing this, and hope this will become a tradition with each new Star Wars show) is just… chef’s kiss. Amazing.

Ok, I think I hold off as much as I could, so let’s delve into this…

One of the most overused jokes you might have read on social media about this show was: “Man, I am really enjoying The Mandalorian season 2.5″. That is probably the main thing about this show; episodes five and six have little to no Boba Fett, and instead, we are playing “catch up” with Mando. Please don’t get me wrong, those episodes were superb. Mainly when we see (much better CGI looking) Luke talking to Ahsoka (yep, Rosario Dawson is back and reminds us she’s also getting her show) while training Baby Yo- I mean Grogu. And I get it why they have done it; it only makes sense since Boba Fett had officially returned in The Mandalorian. It didn’t bother me that they are “returning the favour” and linked those two characters again.

That is the sandbox concept; I was talking about earlier – I don’t mind when the TV show I am watching isn’t “just one thing”. I understand why people would, so this is purely my personal preference. But I loved we caught up with Mando, and it wasn’t for the sake of it, as he plays a vital part in the finale of this show too. So at least he wasn’t there just for “shits and giggles”.

The main complaint I’ve heard about The Book of Boba Fett was how inconsistent it is and that the creators felt the need to bring back other characters like Mando, Grogu, Luke etc. And how in turn, those characters “saved this show”. And this is where I would disagree. Look, I get it this show wasn’t a big action piece from the get-go, as it’s more of a slow burn. But here’s the thing about that, the slow burn element actually worked and paid off here, at least for me. Because the final episode of season one was great, and if we didn’t have the built-up before, it wouldn’t have worked as well.

In a way, I would compare this show to Mad Max: Fury Road (2015). Because that’s a movie you can “boil down” to something else too, how there is no story, it’s about trucks who drive through the dessert just for them to turn back in the middle of the movie and ride back. Yes, that’s a description of this film I’ve heard somewhere once. And on a really surface level, sure, that is what happens in that film. But there is so much more to it than that. The same goes for The Book of Boba Fett. If you think the best episodes are the ones without Boba Fett, fair enough. They were great. But if you think they “saved the show”, that is where I would say for you to re-watch it as you weren’t paying attention. Because this is a good old fashioned slow burn of a show that pays off, but it needs to get there first. Without all the built-up, the pay-off wouldn’t have worked.

While writing this review, we still don’t know (at least officially) whether there will be a second season. I wouldn’t mind having it, but also I would be satisfied with just one season. But the way this show ended, I would suspect we are getting at least one more season and honestly? I couldn’t be happier. I had low expectations going into this show to be honest, as Boba Fett was always a mystery to me. Mystery as in “how come so many people love that character who got killed really fast in the original trilogy?” Then, he came back in The Mandalorian, where they made him cool, and that got my hopes up. Now, after finishing the first season, I am fully on board.

Overall, The Book of Boba Fett is not perfect by any means. There are passages you might get bored with. There are episodes where you will be asking: “Hey, what show am I watching?” as two out of seven episodes have little to no Boba Fett in them. But this show built up towards a pretty epic finale that satisfied me, got me excited for a potential second season and made me finally appreciate a character such as Boba Fett. They also struck gold with Ming-Wa as Fennec Shand, as I need to repeat myself she’s amazing in this show. If you are looking for a show that is out there and might take you places you were not expecting, watch The Book of Boba Fett, and you might be like me, pleasantly surprised. But I will say, I can 100% see why people would struggle to like this show. But not me. I would rather have a show like this that swings big and occasionally misses than have procedural, paint by numbers show that would not feel like Star Wars.