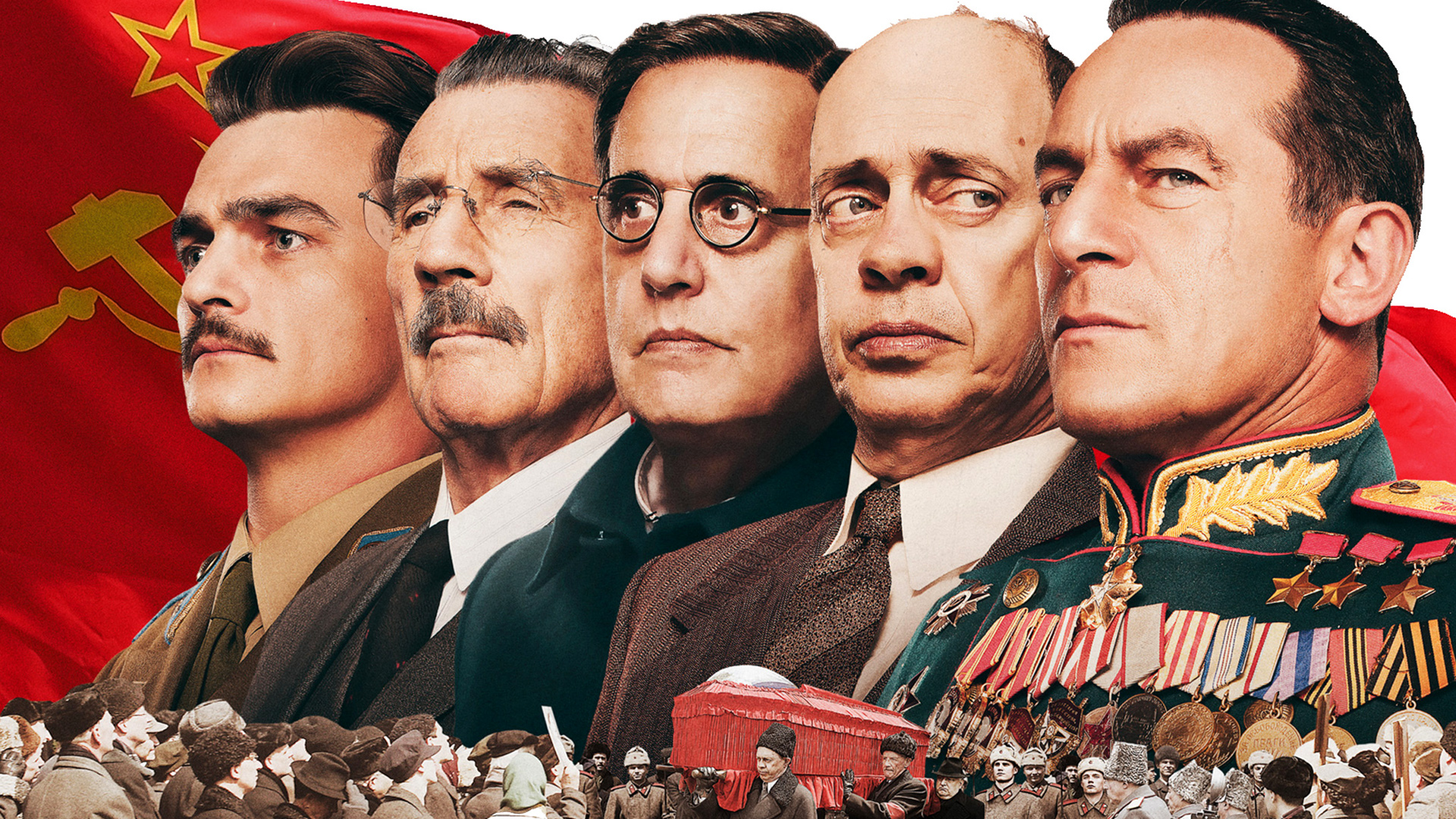 If the aliens came down for a visit and asked me: “Who is the one person currently doing the best political humour?” I would answer: “That’s a weird first question. But sure, if you want the best of the best, currently there is nobody better than Armando Iannucci.” In my eyes, there is currently nobody better who can write sharp, brilliant dialogue that is politically charged and still funny, as proven by Veep (2012 – 2019), among many things. And with this film, he’s proven that it’s not just “current politics/affairs” he can make funny.

The Death of Stalin is not your typical “laugh out loud” comedy. Sure, it has its moments where you might laugh louder, but for the majority of the film, it’s more nuanced. The film brilliantly displays how it might have looked like the day after the mighty Stalin died. And the more the movie shows you, the more you laugh and doubt everything. There is no way something like this happened, right? And then the end credits roll with the “post scriptum” part, about the historical details. And then, if you are interested enough, you google a bit about the real-life protagonists of this film to discover that in reality, Armando painted most, if not all of them, really well. And that is when it stops being funny.

Luckily, that is at the very end. So in the meantime, you get to enjoy this delightful mess our main characters find themselves in – the sheer horror of realising that all the plans they might have had yesterday when their fearless leader was alive have died with him. And now it’s almost “anybody’s game”, first come, first served. Except in this case, first come, first gets to rule the SSSR and put his “friends” either in a position of power (if they can be of any use and, more importantly, trusted) or “simply” dispose of them. Of course, in the name of the republic, not because of anything personal.

And this is why this film fascinates me. In another person’s hands, it would have been a disaster. All our protagonists are spoiled, rotten to the core people with no morals, with only self-preservation in mind. They all have done awful things; the question here is who is the “best of the worst” if there is such a thing. They all rush to manipulate Stalin’s death to their advantage, for their personal gain, believing that they are the lesser evil. At least, compared to their comrades. But in the hands of Armando Iannucci, we can laugh at how deep down they are all incompetent, fearful humans. The Death of Stalin puts that brilliantly on display and leaves it up to you, whether just because one character might be slightly better than others, does that mean you’d be rooting for them.

Another thing this film has going for it is the stellar casting. Everybody from Steve Buscemi to Olga Kurylenko is funny, and you either love them or love to hate them. I need to give a special shoutout to Simon Russell Beale for nailing the role of one of the most despicable humans we don’t hear enough about, Lavrenti Beria. The movie “hints” at certain things the actual Beria did over his lifetime, but a quick search reveals he was truly the worst of the worst. Trust me, if this movie somehow didn’t convince you about his character, google his name, and you will learn that (I am guessing), for a comedy purpose, we didn’t delve too deep into what he was. Also, I need to give a very special shoutout to Jason Isaacs. He is only in a couple of scenes, but he stole the movie for himself. Just his entrance alone is something, and then, when you consider in reality, his character had way more medals than he had on him… Simply a comedic genius. And that’s something, considering this movie is packed with brilliant actors.

Despite everything I just wrote, this movie is simply amazing. It’s entertaining, funny, very well-paced, and it’s a brilliant mix of comedy with chilling drama. The best example I can give you is this – I was trying to convince my girlfriend to watch it with me (I’ve seen it before, but wanted to re-watch it with her) but she thought it wouldn’t be for her. Well, after a few weeks of convincing, we finally watched it together. And she was in from the very beginning, laughing out loud within the first five minutes. When the movie was over, she admitted she was wrong to “judge a book by its cover” as she really enjoyed this film. And I would recommend the same to everyone. I know a movie called The Death of Stalin might sound boring at best and not appealing at all at worst but believe me when I say it’s worth watching. You don’t have to know much about history to laugh at these horrible and incompetent people.

Overall, The Death of Stalin is a film that only gets funnier more time you watch it. It’s one of those movies that has you laughing at one minute, just for you to realise that what you are laughing about is no laughing matter. When you realise people like this existed and did more or less the same or, in some cases, much worse things, it becomes a chilling example of a brilliant cinema. That is why I absolutely adore this film – it makes you laugh, and afterwards, it makes you think. And, towards the end, it might send chills down your spine when you realise these are not made-up characters. Leave it up to Armando Innaucci to make you almost root for some of these horrible people. Definitely one of the best comedies of the last decade.