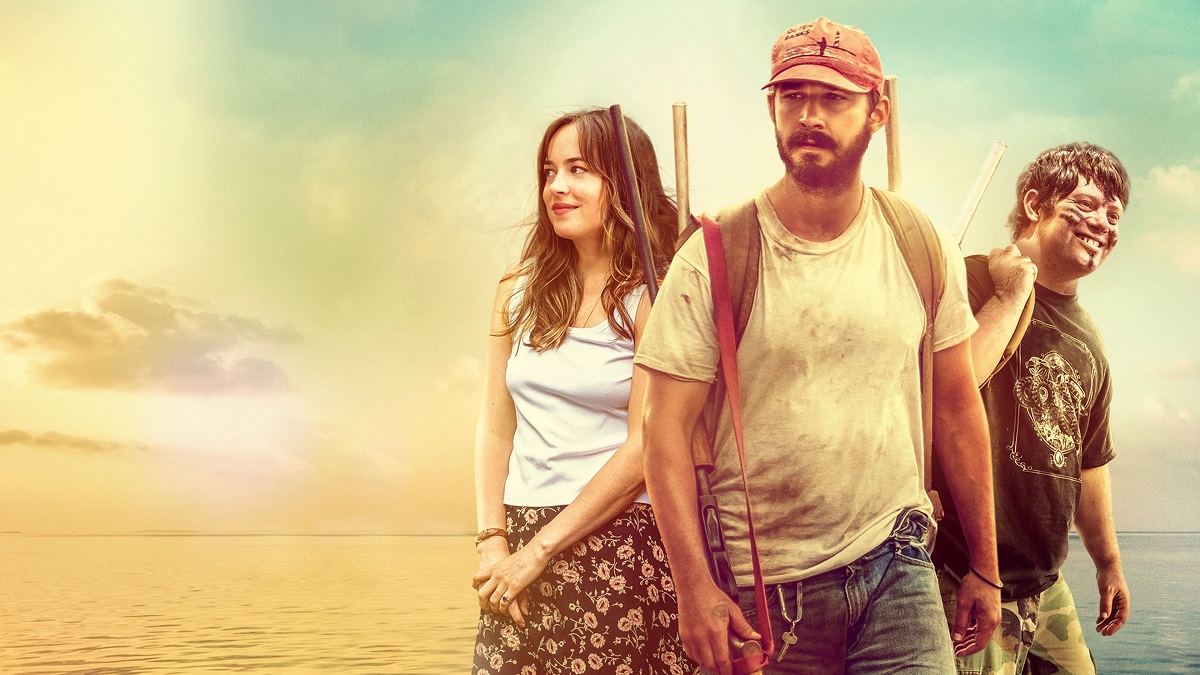 The Peanut Butter Falcon is a tiny, gentle film we don’t see anymore. And before people jump on me with examples of indie films, hear me out. What I am talking about is having stars (Dakota Johnson, Bruce Dern), a few character actors (Thomas Haden Church, John Hawkes) and one problematic yet excellent actor (Shia LaBeouf) come together and make this little movie now. While arguably, Dakota is at the height of her “star power”. We see many indie movies with “big name” actors, but they would usually make them before they “hit it big”, and some rarely go back to those as there isn’t much money to be made. And I always appreciate A-listers, who take their time and make films because they see something in the script or want to work with this director or writer. The best examples would be Daniel Radcliffe, Elijah Wood, and now Dakota seems to be doing the same thing. And I love it. While watching The Peanut Butter Falcon, you soon discover that the story couldn’t be simpler. There is no filler, let alone some CGI effects. No, this is but a simple film that knows what it wants to say and got the perfect actors to do it with.

You might be asking yourself: “That’s all well and good, but why is this movie named The Peanut Butter Falcon?” I won’t spoil it for you, but there is a reason for that, so rest assured, it’s not just one of those “quirky names for the sake of having a quirky title”, no. And it’s not like it would be some big spoiler either. I merely want people to see this film, experience it and make those discoveries as they go along with the film.

There is one more thing that makes this movie stand out – the titular hero/actor of this story is Zack Gottsagen. Before this film, I have only heard of him because I watch the Oscars live. And during the 2020 telecast, he made Oscar’s history by being the first person with Down’s Syndrome to present the Academy Awards. Yes, this film’s protagonist has Down’s Syndrome. And I hope to see him in more movies because he was so natural in this film. The bond he formed with Shia’s character, the manner in which he delivered his lines, and how earnest he was. I really liked his performance.

And this is what The Peanut Butter Falcon is about – three strong performances by Zack, Dakota and Shia. Throughout this movie, they form this unlikely “family” where each of them represents something different. Zack is the wild card; he says what’s on his mind. He is also the unfortunate victim of a system that doesn’t know what to do with him. Dakota’s character represents the system, but only the better part of it – the people who still care. People who want to do more than “just their jobs”; and want to do what is the right thing for the people they care for. And Shia is the rebel with a cause as his character is on this self-destructive path where he tries to do well, but something always brings him down. He also might have the most painful past out of our three protagonists.

Speaking of Shia, let’s stop for a second and imagine we live in a different reality, possibly a multiverse if you wish. But in this one, Shia hasn’t had the baggage and issue he had in his (still quite a short) life. The conversation about him doesn’t have to include the “let’s separate the artist from the art” caveat; the only thing we can focus on in this alternative universe is purely his talent because that is what many (myself included) often forget. Despite his issues and his “bigger than life” persona and ego (I suspect since I don’t know him, so I am only judging by the numerous articles I’ve read about him), he is immensely talented. I believe that in that alternative universe, he would be right up there in between our brightest young stars (he will turn 36 soon), possibly part of MCU, having multiple Oscar nominations, maybe even one win under his belt. That would be an interesting world to live in, wouldn’t it?

The last piece of the puzzle I have to mention is Dakota. This film convinced and turned me into her fan. I knew she was much better than the Fifty Shades franchise, and considering her recent performances (like in The Lost Daughter, 2021, my review here) plus in this film, I am now Dakota’s fan as not only she’s distractingly gorgeous, she can act. The fact that she comes across as a pleasant person in all the interviews I have seen with her also helps, but I honestly believe she will be one of THE best actresses of our generation. Also, as I’ve mentioned at the beginning of this review, I admire her for choosing to make these tiny movies, where she certainly has offers for much bigger; and better-paid films on the table… kudos, Dakota.

I don’t want to overhype this film because the last thing I wish is for somebody to watch this and then be disappointed by how “simple” this movie is. Because The Peanut Butter Falcon is an incredibly simple film, but in its simplicity lies the power of great storytelling. Sometimes, you need these direct movies with no twists; no CGI to remind you that movies can be as simple or complicated as we make them. In the end, the largest budget won’t buy you a great story or intriguing characters. And sometimes, all you really need is to watch three different people come together on a short journey that is somehow inspiring, even though the journey’s goal might seem a bit silly. For example, I don’t even care about this movie’s topic (wrestling), but Zack’s character was so into it that he made me care about it. That’s the power movies can have; they make you care about things you might have not otherwise.

Overall, The Peanut Butter Falcon was a delightful surprise. I’ve heard from a few people I trust it’s a great little movie, but I wasn’t prepared for how great it was. It got me with everything – its simple storytelling, the casting, the southern setting, everything just worked so well in this film. I would almost call this film the most perfect “pallet cleanser”. If you need to get a break from CGI heavy films, dramas that are “heavier than life”, and comedies built around a one-joke premise, watch The Peanut Butter Falcon. It might just reinvigorate your pallet for movies for some time. I can’t wait to re-watch this little film with a big heart.