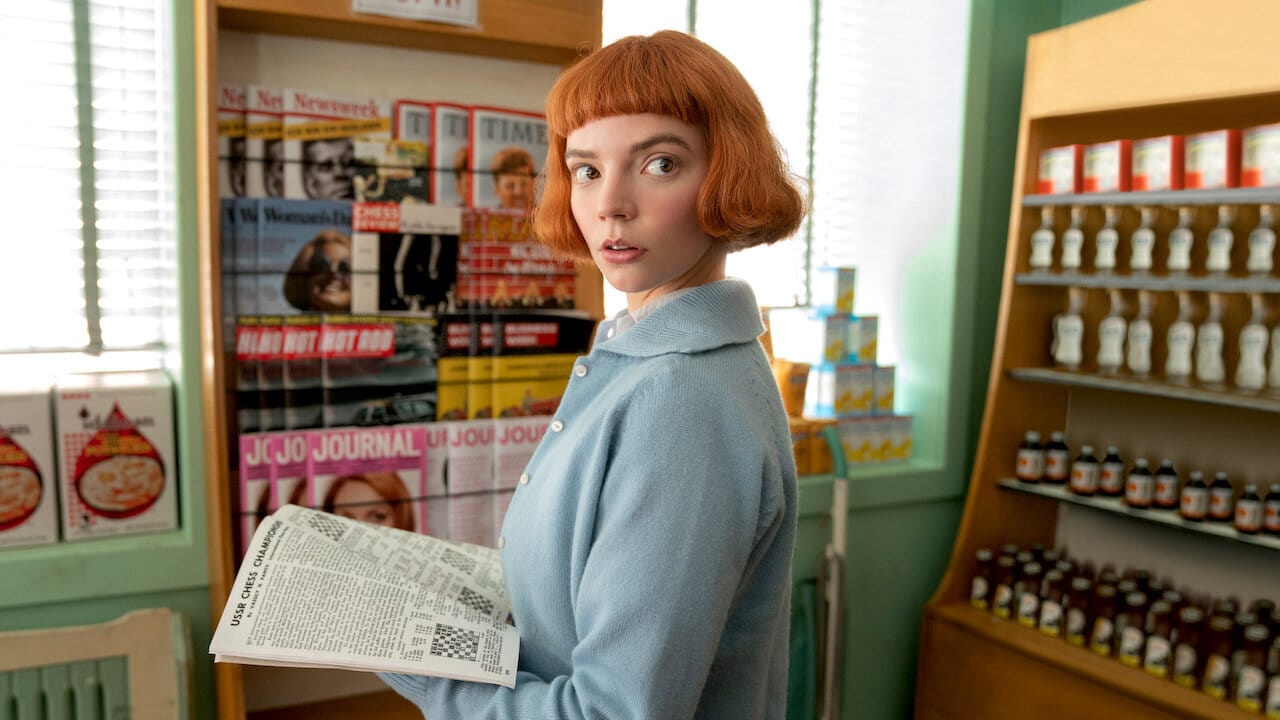 When this show came out on Netflix, I remember seeing the poster, and thinking “that looks interesting, need to get around to watch it”. Then, month or so after, it’s been all over the place, basically there was no escape from the praise this TV show was getting. The main thing I kept hearing how it’s “so original, best show of 2020” and how amazing Anya Taylor-Joy was. So immediately, this show has jumped over about 100 different shows (the fact it’s only 7 episodes might have had something to do with it) as I love playing chess and wanted to see something, that was getting such great reviews. And maybe those reviews managed to overhype me, but I thought The Queen’s Gambit was pretty great, but… it wasn’t excellent?

Let me start with positives – Anya Taylor-Joy. She definitely deserves all the praise she’s getting, as she’s the centrepiece (some pun intended) of this show. With her, the biggest challenge was portraying her character in the way that’s not like the chess board(s) she plays on, black and white. And she’s nailed it, as we understand her character so well, you get mad when she gets back to alcohol and pills (plenty of her story is about her addiction and the battle with it) but you also understand why she went there. It never felt cheap, or it never felt like it’s happening to “boost the time”, those moments always felt true and it’s because of pretty good script, but mainly because of Anya selling them so well. I can’t wait to see her in more things.

I also liked how the show commented on women in these sports (read: sports usually dominated by men) but it never seemed to take the main spot. Those things (like nobody taking Anya’s character seriously at first, some minor or major aggressions from men she manages to beat) are definitely there and visible for all to see, but the show doesn’t make a big deal out of it. Where lesser show would have try to almost “oversell” some of these moments, this show almost quietly celebrates those victories, along with Anya’s character. She is very much in control of her emotions most of the time, as she’s realising how many men (and later on the media) would have judged her harshly, had she lost it, or behaved liked a normal human being.

I have 2 main issues with this show. The first one being the story is pretty predictable. Yeah, there are couple of details that were great and traps this show avoids (for example, the orphanage scenes were not overly traumatic, there were no cliché of being bullied etc.) quite well but as the overall story, it’s just a fairly simple “from zero to hero” story, but set in the world of chess, instead of ice hockey or boxing. Which don’t get me wrong, is still great, but I didn’t get the praise of how this is the best show of last year, or how it’s so unique…? There is a trivia on IMDb, that states the sales of chess boards increased and more people were looking for how to learn to play chess, which is great, as it’s such a beautiful game. And I think this is where the fascination comes from – plenty of people who watched this show, were seeing something unique, because they had little to no idea about chess at all. I am by no means any grandmaster of chess, but it’s a game I’ve enjoyed playing ever since I was 6 years old, so maybe that’s why I wasn’t as fascinated by this as others…?

This also feeds into my second issue with this show – for a show about playing chess, we don’t really see plenty of it being played. At least not in great detail. And hear me out – I know, we need to make this show more cinematic and your typical game of chess isn’t really that exciting. But plenty of times, we don’t see anything but openings or closings! We see flashes of her kicking ass, but we are not actually there when it happens! It’s like having a montage of Rocky fighting through all the rounds, just for him to win within 20 seconds after. All I am saying is, those movies would have been less impactful, had we been there just for a minute with each fight. But here’s the thing, I totally understand why they have done it like that, but I was expecting at least the games towards the end of the show to be shown in bit more of detail, that is all.

I don’t know, whether it was mix of those two things, but The Queen’s Gambit didn’t really grab me. Which is a shame, as this was supposed to be a show I was destined to love. From spectacular Anya, to the topic of it (my first and so far my only tattoo is chess related, that’s how much I love this game) everything was screaming my name, the glowing reviews, everything was telling me how much I should love this show. And when I finished it, I “just” liked it… Don’t get me wrong, this is not a bad show by any means. But I was expecting something more.

Overall, The Queen’s Gambit is a great show, with spectacular Anya in the main role. You will enjoy it whether you’ve played chess your entire life, or you have no clue about anything (how is this piece called again?) That’s definitely part of this show’s success, it gave plenty of people the exposure to this great game and it seemed to have made chess cool again. The only real issue I had with this, I expected something, that I would want to stay up and binge in one day. It took me 3 days to finish this show, even though I had time off. That alone tells you something, but again, I understand I might be in the minority here.