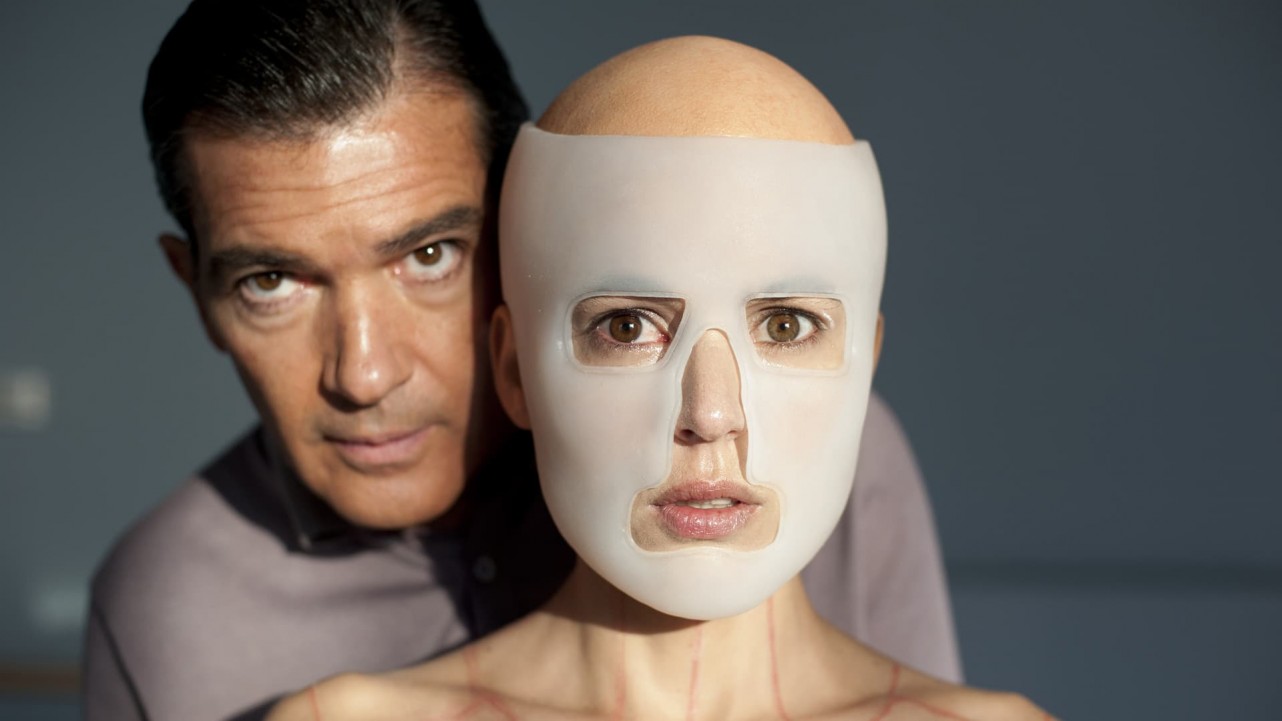 There are filmmakers who make great movies, that are not for everyone. For me, David Lynch is the perfect example of an artist, whose work is not easy to recommend to the “normal” audience, even though he is one of my favourite directors of all time. But even his movies pale in comparison to some of Pedro Almodóvar‘s work. That is why I like him too (can’t say love him, as I still haven’t seen as many of his movies as I would have liked). The Skin I Live In (in original La piel que habito) is yet another example of twisted brilliance, I desperately want to recommend to everybody, but at the same time, I can’t, as I fear some people would just stop talking to me after watching it, fearing for their safety. 🙂

Which is fair I guess, as this movie is… unique? Even that word doesn’t do this film justice. What I loved about this movie were the slow reveals of the necessary information. If this was an American film, there might have been a narrator, there would have been the awkward dialogue like “Of course, Mother, because that is how I always address you” to make sure everybody understands who is who, and what is happening. I think that is the main difference between American x European cinema, as plenty of European filmmakers give you information as the movie goes, trusting the audience and their intelligence. This movie is no different. Every time you think “I see where this is going now”, the movie makes a different turn, making you either really invested into the story, or really frustrated. Luckily, I was in the first group.

I love when movies treat you with some respect, allow you to guess, but at the same time, provide you with some answers, so you can put everything together, piece by piece. In this case, it is literally piece by piece… without going into spoilers, I can’t say more and for this review, I won’t go there, as I would love for you to watch it without knowing anything about it. Because this movie takes you places. And sure, plenty of them are uncomfortable, but to me, that is why I love unorthodox filmmakers/art.

Especially lately I subscribe to a theory that good art should shake you up a bit, make you think, show you something that might be slightly unsettling, on the edge or just slightly over the edge of what some might call a “good taste”. Why? Because art should evoke emotions. But nowadays, people seem to shy away from anything too… negative. Nobody wants to “make waves”, everything feels the same, sterilised. And I am not saying art needs to be just negative things about bad people doing horrible things, of course not. But just because a movie displays something, that is wrong, outrageous or on the edge of “good taste” (whatever that means) that doesn’t mean that the artist(s) like that bad thing. Or that people who like that type of art, like it because of that element. Plenty of times people gravitate towards something different because they want to be exposed to something they wouldn’t have been exposed to otherwise. That in return might start conversation about certain topics, that otherwise would stay off the table.

And I think this is what Almodóvar is doing here. He’s bored of normality, things being the same, he challenges the world. He’s forcing us to have a conversations about topics, we probably wouldn’t have. Like in this example – where is the line between good and evil? Does one horrible act justify another one? Is there such a thing as morality, or is that just set of rules we force upon ourselves? What makes human? Is that the skin they live in, or is it a soul? If it’s the soul, can you destroy it…?

The Skin I Live In is definitely one of the best movies I have seen in a long time. It’s really strange to say I would highly recommend it, given it will make some people really uncomfortable, but I honestly would recommend it, as it’s not something you see everyday, that’s for sure. It also makes you think, treats the audience with respect and showcases talent of Antonio Banderas and Elena Anaya who were both magnificent. This was a wake up call, that I do need to watch more of Pedro’s movies, as even some of his films I didn’t love as much are still worth seeing. Again, when somebody has such a unique vision, they tend make unique art. Sometimes, that art misses you. And sometimes, it hits you in a way you’ve never expected.