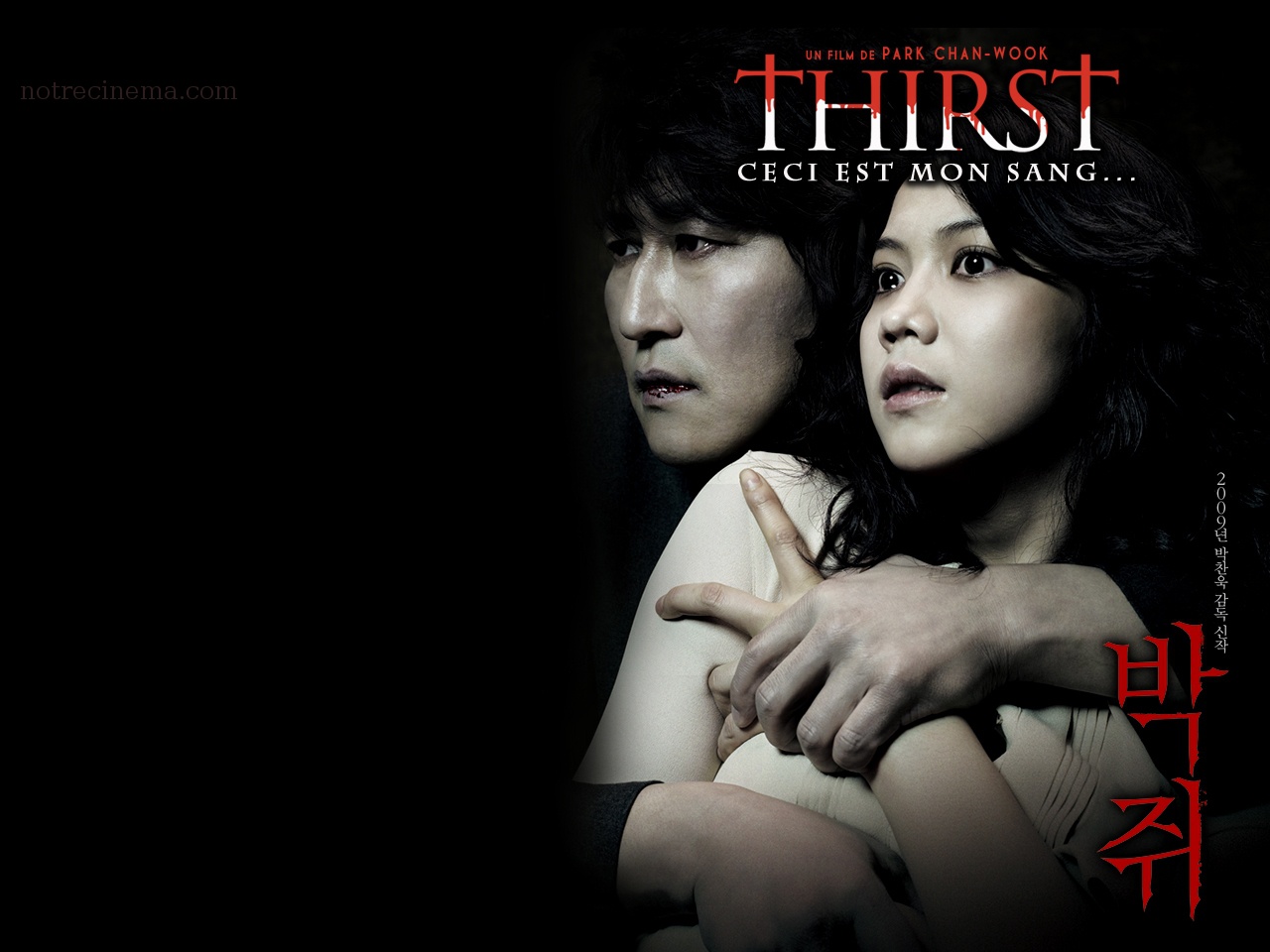 If you ever seen any movie by Park Chan-Wook, you know he’s unique in every sense of that word and his films reflect that. They tend to be really raw, often bloody movies, with dark, twisted sense of humour. Thirst is no exception… except it is, as at some points, you can’t help but laugh at scenes you were not supposed to. I think that’s this film’s biggest sticking point, some scenes don’t work as they might have been intended.

I really liked the concept behind this film – priest volunteers for a vaccine trial (watching this in COVID-19 times, this definitely hits slightly differently), and then, he dies. Except he doesn’t. He is just a bit more “vampirey” than before. And needs to drink blood to heal, as that’s the only thing that seems to be keeping the virus under control. So he struggles with morality, he’s trying not to kill, but of course, nothing is that simple. And his biggest challenge, seemingly innocent girl he starts falling fall, might not be as innocent. This is everything I will share about this film, as anything beyond would just be ruining some surprises this movie has in store for you.

What I really liked about Thirst is what I can say about any of Park’s films – his aesthetic is on another level. I don’t know how to describe it, but you just know by how certain scenes are framed, lit, shot, that you are watching something totally different than your “paint by numbers” average film. He’s got a real gift of telling really unique stories in fascinating, unique way, that keeps you watching your screen without blinking, even though what is happening is sometimes bit too graphic to handle, for some people. I always liked that about him, he’s got the balls to go for anything, as in his movies, it’s not just about the extreme violence, or the occasional gore/nudity. There is always something extra underneath.

Take this film for example – it can be viewed as simple vampire story, but it is also about power and what it does to people with no moral compass. How ultimate power can and does corrupt people, what it takes to be a good person. And how even a good person can slip up. That’s what I have always found fascinating about his movies, not only they have great ideas, they consistently throw something unexpected on you. Kind of like taking a shower, where the water gets really cold for a few seconds – it’s something that you don’t expect and definitely wakes you up.

My only issue with this film is some scenes came across more comedic than I think intended. It’s almost like with Thirst, Park Chan-Wook didn’t find the perfect balance between drama and subtext and thus some scenes don’t hit you the way they were meant to. You understand what’s happening, you also understand how were you supposed to feel, but it just doesn’t hit you, you are not sold entirely, it’s almost like there is this disconnect between the viewer and the movie and I don’t think that was intentional.

I need to praise the main duo – Kang-ho Song and Kim Ok-bin. With Kang-ho, I have seen him act so many other times I know he’s a great actor, so I wasn’t that surprised, but I haven’t seen Kim anywhere prior and I was really impressed with her performance, as her character is really complex one, and she nails it. You can argue that she’s the main star of this film, as her character goes through a big journey and it’s Kim’s performance, that makes it work without you questioning it. Without going into any spoilers, what she’s done in this film isn’t easy and can easily derail your movie, if it’s done by a lesser actor. But you always understand her character, where she is coming from and mainly you can see why she ends up the way she does.

Overall, Thirst is definitely an interesting movie with a great premise, some stunning raw visuals and brilliant performances, that’s only hurt by the occasional almost genre fluidity, where you get what the movie is going for, but you can’t take it seriously. It’s worth your time and I don’t think you will regret watching it, but it’s definitely not on the same level of his other movies, such as Oldboy (2003), Stoker (2013) or The Handmaiden (2016).