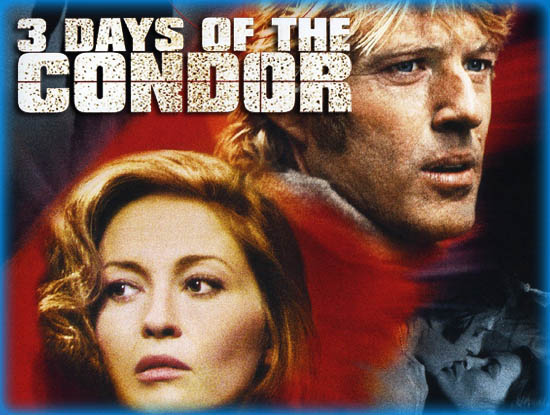 “They don’t shoot movies like that anymore” is what you can hear plenty of times from some movie fans, regarding these old fashion thrillers and it kind of became almost hipstery (that’s 100% a word, I know words, I have the best words) thing to say, as there advantages to where are we now (film making wise) and there are disadvantages to it too. But, when comes to this movie, one thing will be on your mind for its entirety – they sure don’t shoot films like this anymore.

Three Days of the Condor is a film that gives you exposition/new information only when it’s absolutely necessary. You are dropped into this world, where for the first 30/40 minutes or so, you’re not quite sure what is happening and you need to take a journey with Robert Redford‘s character, as we learn everything through him. That’s something I truly appreciated – in modern movies, there would have been a text on a screen that would inform us “Headquarters of CIA!”, so even the ones that only half watch this movie are still in on what’s happening, or Redford’s character would’ve said to his colleagues at work “Just another day working for CIA, am I right?” or something to that extent, that awkward kind of exposition, that only serves one purpose – to make sure everybody understands everything.

Not here, as you kind of figure out he’s not doing an ordinary job, but you will learn what kind of job is that later. The same goes for everything in this movie – Sydney Pollack wants you to “work” for everything he tells/shows you, so he always gives you just enough, so you are not totally confused and plays the long game, where eventually, he relies on the audience to be involved, in the “pay attention and it will be worth your time” kind of way.

There is something really intriguing about this, as it makes you focus and think about what’s happening, why are things happening, involving you more with the story and also, to an extent, allows you to make your story/prediction when comes to what’s happening on the screen. I kind of understand why this isn’t as common anymore (movies are commodities, where you need to appeal to the largest audience possible) but that’s why I really appreciate directors, who can still do something similar (the “main” one, who comes to mind, is Christopher Nolan) as there is something about this way of shooting a movie, especially about spies, secret agencies and everything mysterious. It works well for this kind of genre.

What I really liked in this movie was the sense of paranoia in every single scene, where we are Redford – slightly clueless, not trained for this and most importantly, not sure who to trust. Each step he takes, he’s not sure whether that’s the correct thing to do, but because of his intellect (he reads every single day, after all) he always finds his way out of any situation.

I also want to applaud this film for the end, where it seems “the good guy(s) won”, just for a movie to deliver its final dose of paranoia, where the last shot of Redford symbolises everything – the insecurity, the feeling of helplessness, the feeling you get, once you realise you might be forced looking over your shoulder for the rest of your life.

Three Days of the Condor is definitely a movie worth seeing, as it defines what a paranoia/spy thriller should be about and to this day, filmmakers are “borrowing” from this movie a lot (one of the most known examples would be Captain America: The Winter Soldier (2014)), also a Redford movie… what a coincidence! (It’s not really ;-))