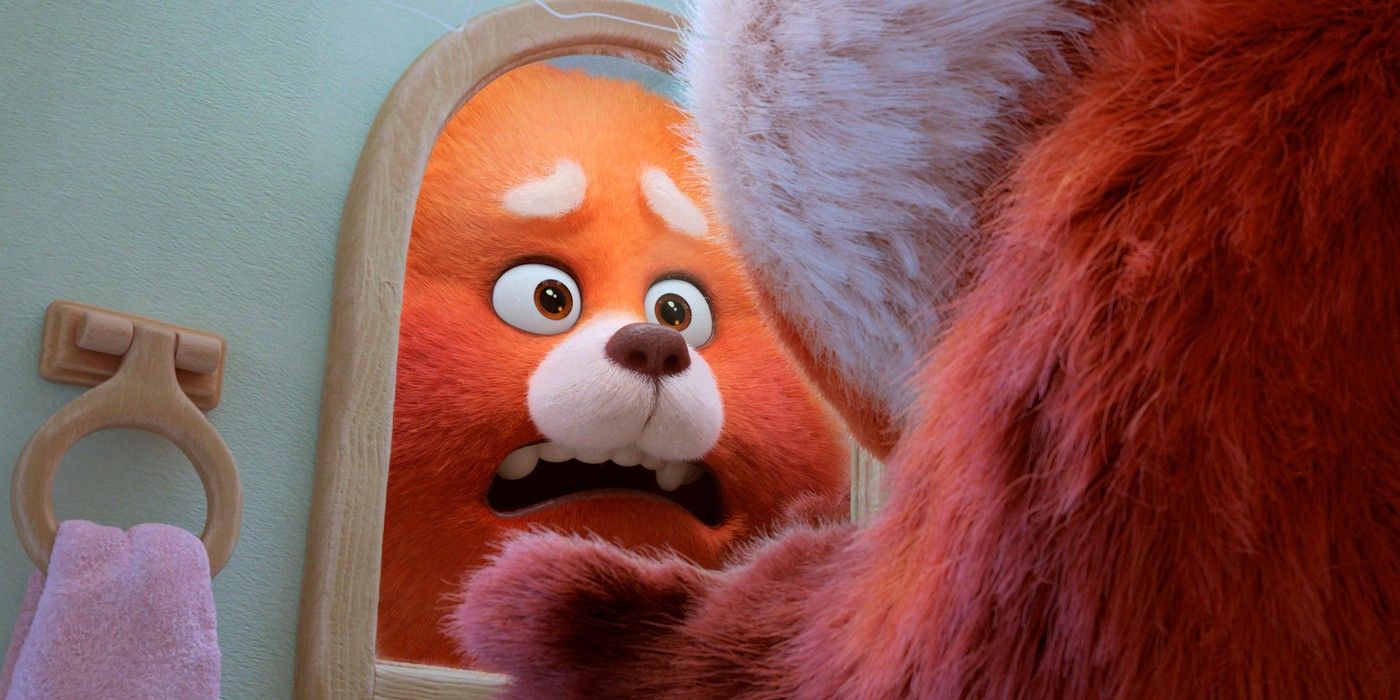 We live in strange, online times. Because everything I’ve heard about Turning Red before watching it was “It’s the new Pixar movie, and OH MY GOD, IT’S ABOUT MENSTRUATION!” Some people seemed to be disturbed, shocked, and even disgusted by that fact. That is dumb as yes, this lovely film deals with this topic, but it also deals with so much more! Saying “Turning Red is a movie about menstruation” is like saying Dune (2021, my review here) is “a movie about sand and sandworms”. I mean… yes, they are part of the story, and there is a shitload of sand in Dune. But in both cases, those films are about so much more, and you are merely scraping the surface. Plus, in both cases, these movies are stunning to look at!

What I loved the most about Turning Red was how unique it looks. At times, I thought I was watching anime mixed with Pixar, in the best possible way, where it didn’t feel exploitative or out of place. Some action sequences were honestly breathtaking and confirmed to me that Pixar would keep pushing the limits of animation. I liked how over the past couple of years, we got Pixar films that felt different and explored different cultures. You can still tell it’s Pixar, but they aren’t afraid to change the animation (or its style) to fit the story narrative. Speaking of that, let’s delve into the story beyond the “it’s a menstruation film”.

I honestly hope people will see Turning Red for it is as a whole, rather than for one part. As I thought, this movie is more about growing up, going from that stage where you are no longer a child, but you are still so far away from being an adult rather than “menstruation only”. And how you get excited about new things, things that didn’t excite you before, and in Meilin’s case, how to combine everything she is going through with her family with what they stand for and the pressure to honour them and act a certain way. This film did a spectacular job balancing and portraying all these themes and making us understand them well enough to be invested in the story and characters.

What I also loved were the unconventional choices. For example, it wouldn’t be that long ago when a movie like this would have Meilin be the outcast with little to no friends. But in this film, she has her girl group. Is she the popular kid in school? No, but she’s pretty content with where she is. And the moment she starts turning into the red panda, it’d be so easy for all her friends to be afraid of her. But again, this movie takes a different route where some are taken aback at first, but there is that one friend who simply wants to cuddle her because she is so fluffy. There is a reason I related to that character so much was simple – that’s me. I am sorry, not sorry, but if one of my closest friends tells me she can turn into a giant red panda that looks fluffy, I am cuddling it. And like her friend in the movie moving onwards, I would too tempt her so she can turn into the panda more often. Oh, Pixar, yet again, so relatable.

Speaking of relatable, I have a confession to make. I have never been a 12-year-old girl. However, I still remember my classmates from that time, and although I suspect neither has been turning into giant red pandas (or maybe they were, and I just didn’t know…?), that was another aspect of Turning Red I adored. They nailed the behaviour of girls of that age. It was so easy for me to sympathize with Meilin immediately because I have known and will encounter girls like this (given my nieces are approaching this age), and they can be too much. But to be fair, I don’t think it’s just girls; I remember myself when I was around 12/13 and was too much at times… hell, I am still sometimes too much, so what gives, huh?

That saddens me a bit; many people have gone or will go into this film with the mindset of “that’s the menstruation movie”. Because it’s still taboo to talk about it, let alone show it on the screen. I mean, who are you? A monster wanting the children to learn about something important? Will somebody think of the children…? Oh, wait. Someone already has. It’s Pixar. Not only do they know what they are doing, but Turning Red is also much, much more than what some trolls on the Internet have tried to reduce it to. And it shouldn’t be taboo to talk about a literal body function more than half of the population experiences.

Overall, Turning Red is a delightful Pixar film that I unconditionally loved. I didn’t expect to love it as much, but here we go. It’s funny; the characters are relatable; it looks stunning, the soundtrack is awesome, and the message is worth discussing. It’s hard to balance everything, to honour yourself while honouring your family, but you need to be true to yourself; in the end. Maybe there is a giant red panda hidden inside of all of us, just wanting to be free? Pixar is still at the top, and it’s not even close. I love what they have been up to lately.