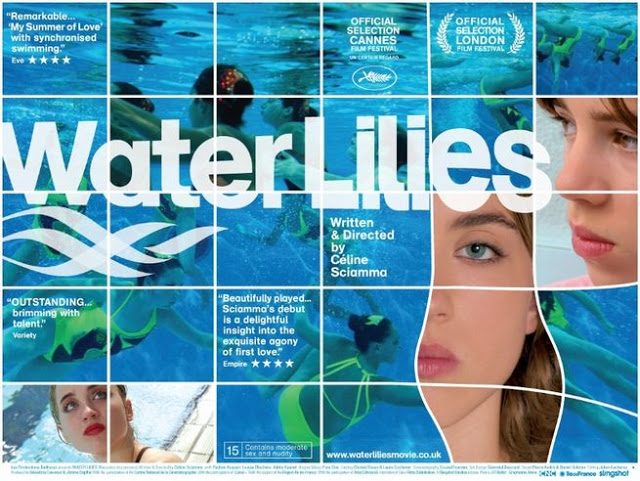 I have stumbled upon this film by a complete accident, I must admit. And before watching any kind of foreign movie I’ve never heard of, what I do is to go through the directors/screenwriters filmography to see, whether I am familiar with any of their other work. With Water Lillies (the original French title is Naissance des pieuvres) I have discovered it’s a debut of Céline Sciamma, the woman responsible for Portrait of a Lady on Fire (2019), the movie I’ve heard so many great things about and what I’m planning on watching soon.

Anyway, I gave this movie a shot and I really liked it. Water Lilies is something I like to call “simplistically difficult movie”. What that means is, the story of this movie is straightforward, easy to follow. What becomes harder to wrap your head around are the characters, as you need to think about why they are doing the things they do, where are they coming from, what’s their motivation…?

Movies like Water Lilies don’t usually give you straight answers, so you either get it, or don’t. And I like that. This movie’s story is focusing on 3 very different girls – Marie, who’s growing up slowly realising she might prefer girls, but is (as most teenagers) really shy and awkward, Anne, who’s your typical “next-door neighbour” kind of girl, who in a normal crowd wouldn’t standout as much as she does next to a team of synchronise swimmers, and Floriane, who because of how she looks like, gets hit on all the time, therefore having a “certain” reputation in her swimming team and beyond that.

And this film follows them throughout hardships, where you eventually find out, no matter how you look, you will always have some issues. Also, what was quite well displayed here, is life doesn’t always workout the way you plan it, as there will always be some curve balls thrown your way.

The “chubby” girl (for the record, I wouldn’t describe her like that, but that’s what the movie was going for) is struggling with her body image and for the entirety of the movie, is trying to date this one guy, who’s more interested in Floriane, the “beauty” of this story. But both of them are still virgins, which is a fact that might surprise you, the same way you might be surprised that it’s eventually Anne, who sleeps with the boy first. What she doesn’t know is he’s tried it with Floriane first before coming to her place, who flinched in the last second (based on what she said to Marie).

I really like when a movie can surprise me, where the surprise makes sense and this one unfortunately did. As this is the kind of typical teenager behaviour, where you’d go for a girl, and if she says no, you’d go to your “safe” choice, who was Anne. I also liked how gently they’ve displayed the relationship between Marie and Floriane, where at first, she doesn’t want to have Marie near by, just so she’d get curious enough about her to allow Marie to be part of the group, allowing her to watch them while practising.

As I’ve put into the title, this is a very strong debut by Céline Sciamma, where it didn’t matter to me I didn’t get all the symbolism she’d put into this film, I still overall liked it, as there was something about her style, her pacing, that even though the movie is on the slower side, it never feels boring or stale. And that’s not an easy thing to achieve. After watching Water Lilies, I’m really excited to watch Portrait of a Lady on Fire and I’m hoping, it will live up to everything I’ve heard about it. And I have a feeling I will be pleased with it, but only the time will tell…

That’s all for this one! Did you see it? What did you think of it? Let me know!