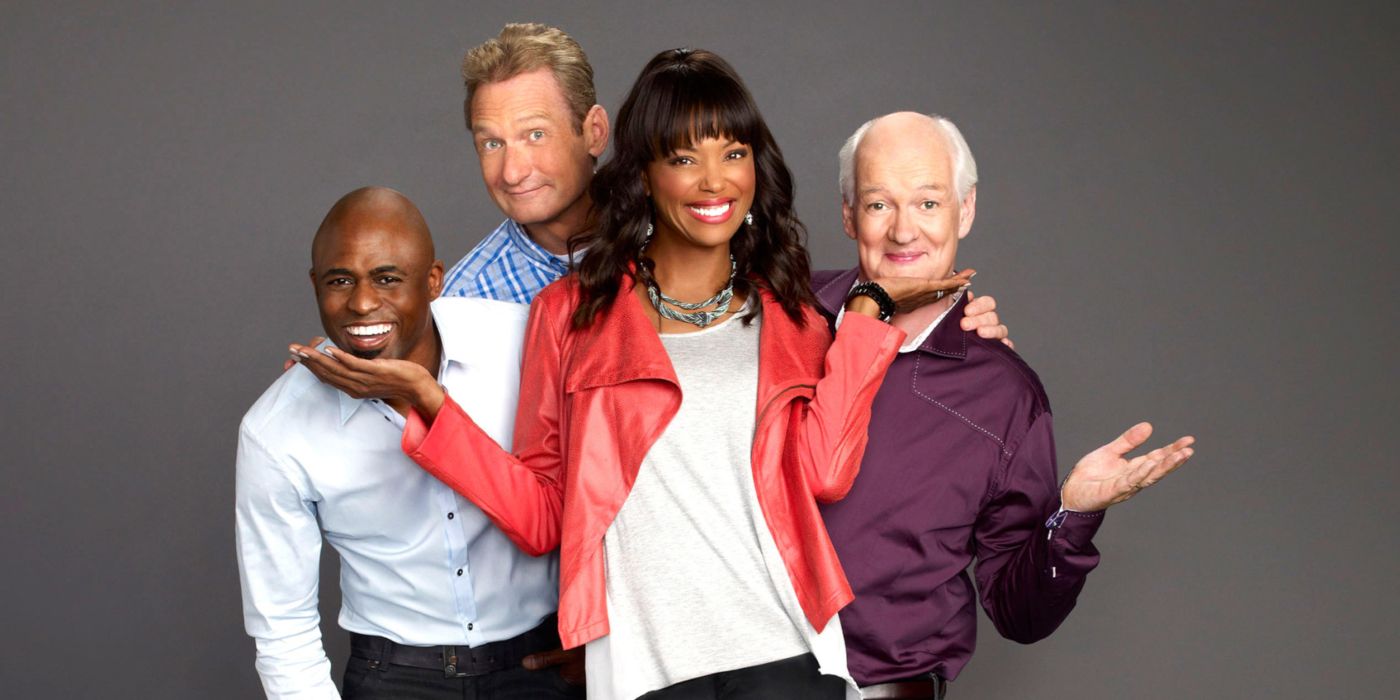 Before going into this review, let me clear something up. I know that in theory (and reality, really), the original Whose Line Is It Anyway? ran from 1998 – 2007 and the newer one, hosted by Aisha Tyler has “only” started in 2013 on CW, so therefore shouldn’t really count towards the OG Whose Line Is It Anyway?, but I am counting them as one. Sure, the original host Drew Carey has been replaced by aforementioned Aisha, but other than that, it’s exactly the same format. Except it’s slightly shinier, the video quality has gotten better and our beloved improvers have gotten slightly… more matured. 😉 But everything is the same, the same people are running the show, it’s basically the same cast and most importantly, it’s still hilarious.

I might be one of the few nutcases, who actually watched every single episode of not only the original show, but the CW one too. Yeah, I know. But let me tell you, the original show helped me get through some tough times. Back when I moved to Scotland, I had a job where I was promised more hours per week then I was ultimately given (so you can imagine, as a working student, the money was extra tight) and I had barely any time on my hands, as I was either studying or working a job I didn’t like. This show kept me laughing in my time off. These geniuses of improv comedy, they helped me through everything and even now, when I have different/better job, I am no longer a student and have more free time to myself, I am always looking forward to watching this show. When I learned, back in 2013, it’s coming back on CW, I was so happy, as I can’t even begin to describe how much I love it.

Let’s name names. I can’t list every single person involved with this, but the main trio (Colin Mochrie, Ryan Stiles and Wayne Brady) are all hilarious in their own ways. Colin is the “I will say exactly what’s on my mind, either it will work, or it will work because it’s not working” comedian, absolutely love him. Ryan is the “I like dirty jokes, really quick on his giant feet and tall freak” kind of guy and probably my favourite, if you put a gun to my head and I had to choose one. And Wayne is insanely talented when comes to making up songs as he goes. He’s funny as hell, but his main strength is definitely his rhyming ability and the fact he can actually sing really well! But here’s the thing, over the years, so many great people sat in the fourth chair, I do need to name some of my absolute favourites out the “guest comedians”.

Greg Proops (witty intellectual guy, who’s always up for some political joke, throwing shade or knowing most of pop culture), Brad Sherwood (definition of somebody, who is in between “chaotic neutral” and “chaotic evil”, love the guy), Charles ‘Chip’ Esten (who’s one of the few people who is as great as Wayne when comes to song challenges), Jeff Bryan Davis (also somebody, who can keep up with Wayne singing-wise, and if you want to do some Christopher Walken impression, give Jeff a shout), Gary Anthony Williams (who’s not only funny, but his amazing weight loss was a huge inspiration for my own weight loss journey), Jonathan Mangum (if golden retriever was a person, it would have been a Jonathan, because he seems like the goodest of boys), Heather Anne Campbell (her sense of humour can be all over the place, in the best possible sense) and I am pretty sure I am missing out on some people. But there have been so many. And all have their strengths, and most importantly, all of them will make you laugh in different ways.

Here’s the thing about this show – given the fact it’s improv, you are bound to laugh at least a few times per episode, even if you can tell where the scene/joke is going, because these guys know it’s not just about the joke itself, it’s about the delivery. Or sometimes about how not to deliver anything, when they crack each other up, by admitting they have nothing, no punchline, no joke, mostly in the singing challenges. Those are especially funny, when they don’t go the way you expect them to go. What I liked about the latest season (technically season 9, but I will refer to it as season 17) is they have started to leave in more “ruined” takes of those singing challenges, when they have no idea where the joke is going, and they just say/sing it, so they “restart the scene” instantly. Reading it backwards, it sounds so boring, but trust me, you would be having the time of your life watching these top of the class comedians do their schtick.

If I have to be critical a bit, I would only say the CW reboot (or continuation) started a bit slow, and it took them a while to get back in the groove. Also, since it’s CW, they have more episodes with a extra special guest stars, who (surprise surprise) star in some shows produced by (you guessed it), CW. Some of the celebrities can be funny, some want to be funny, but they don’t know how to do improv properly (which is understandable, as it’s a genuine skill to do it as flawlessly as those guys and girls) and there were couple of special guest stars, who didn’t seem to care too much either way. It seems like CW got the message, as good portion of the season 8 (or what I would call season 16) and the entirety of the season 9 (or 17) there were no celebrities, just improv people, doing what they are doing best. I honestly believe that was one of the strongest seasons out of them all.

I could rant about this show for hours, as I genuinely love it. What I admire is the fact that the performers don’t really feel the need to swear (at least not that much) and if they do, it usually serves as kind of “punch” for the scene/character. And let me clarify, I have no problem with swearing, I do swear a lot myself, but why I mention this at all – you know, when something is successful, there will be versions of that all around the world. I mean, even this started as a British show. Yeah, did you know that? Whose Line Is It Anyway? (1988 – 1998) started in the UK and I’ve tried to watch it, but after season and a half, I gave up on it, as it was too dry/intellectual for me. One of the rarest of occasions, where the American way, making it flashier, faster, sillier, actually worked. Anyway, in 2011 Czech people jumped on the bandwagon with a show, that’s basically a copy of WLIIA (in Czech language it’s called Partička (2011 -?), that can roughly be translated to “wee group”) and I have tried to watch an episode or two. And not only they got time in between scenes to change to costumes to make the scene funnier (which it usually isn’t and is clearly there to allow them to think about the scene, hence kind of going up against of the improv idea in general) they swear basically in every second sentence. And again, I have no problem with swearing, but in comedy, there is a point where you are obviously relying on the “shock” factor of “oh, they said a bad word, funny!” and that’s not funny. But I might have already been spoiled by this masterpiece.

Overall, I can’t praise this show enough. It got me through some rough times, and even made me proper belly laugh like anything, that’s currently airing. I honestly hope people at CW know, what’s best for them and keep this running for as long as possible, or at least for as long as these guys want to perform all these crazy, hilarious stuff for our amusement.