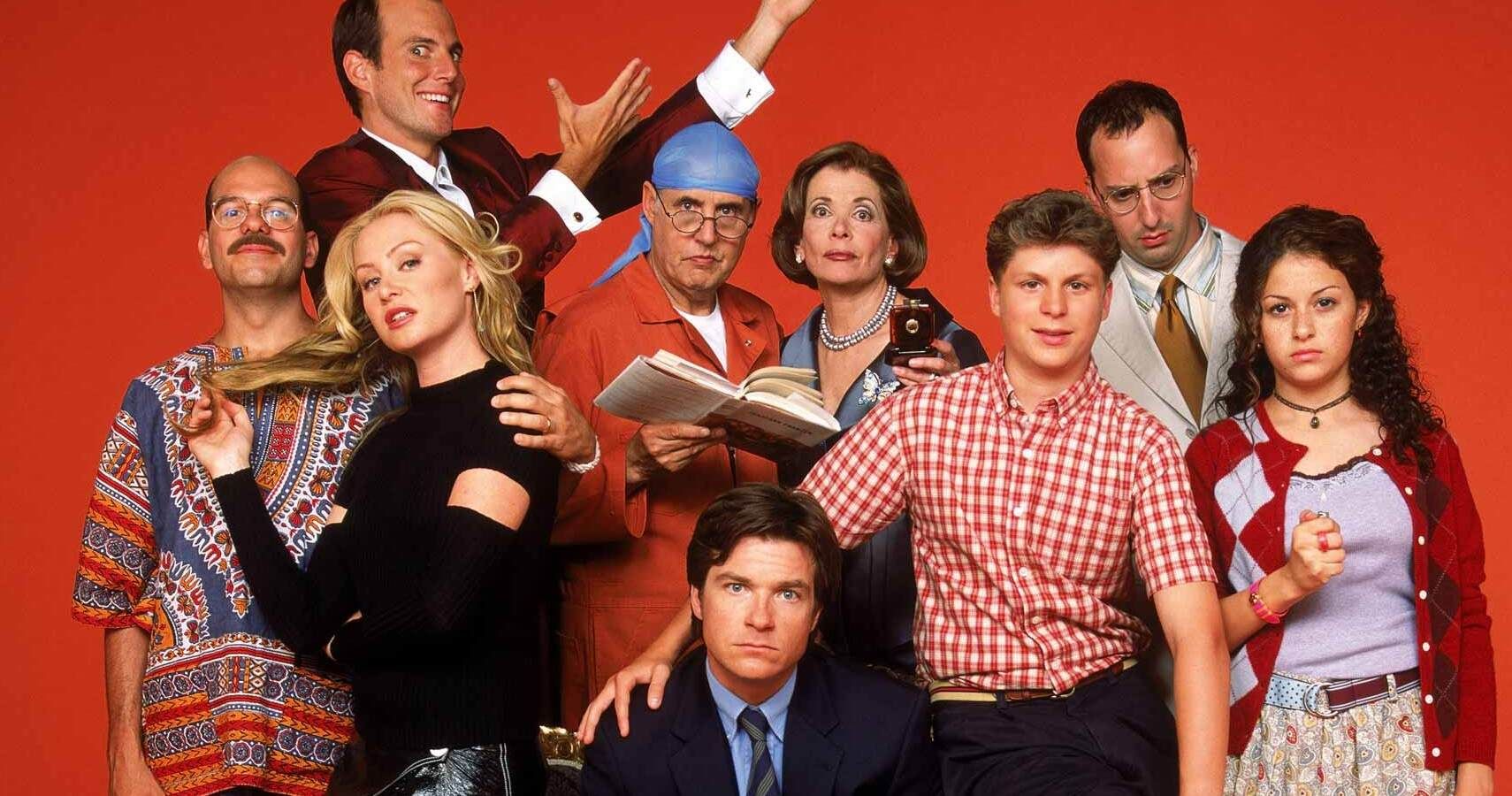 I remember a long time ago when I started to “delve” into pop culture, into movies and TV shows more; I have always heard about Arrested Development. Of course, that was long before Netflix (well, at least the streaming version of Netflix, as I believe the “beta version” has existed for a while) and their additional seasons four and five. I will seem so old, but “back in my days, we only had three seasons of Arrested Development, and they were all great!” But even though I’ve heard so many things about this show, I never got to watch it. That is until now.

Let’s just cut through the chase – yes, everything you might have heard about this show is true. The first three seasons are hilarious, funny and still work today. Sure some jokes might have aged worse than others, but they also come from characters who were supposed to be unlikeable out-of-touch people. That is why I won’t be talking much about those seasons, as there isn’t much to say. They are great. They are clever, funny, self-referential (mainly third season, how the main storyline is the actors pleading not to get cancelled) and your “typical” two steps forwards, five steps back kind of show. And had it not been for seasons four and five, it would have been pretty much a “bulletproof” show, quality-wise. Yes, even in the earlier seasons, there might have been some weaker episodes. But overall, there was still a lot of quick “blink, and you’ll miss them” jokes.

And then, Netflix came around and issued the fourth season (2013) and fifth season (2018). And here is where the cookie crumbles a bit and what most of this review will focus on. And because there might be some spoilers (even though I don’t think it matters as much here), let me put the spoiler tag right here, so we can go into the details.

When I first started the fourth season, it seemed really messy and all over the place. Almost nothing worked, and to top it all off, my TVTime (an app I use to track the TV shows I watch, a really great tool if you are like me and watch too many TV shows) was also confusing, as the titles didn’t match at all. After a few episodes, I discovered the reason – I was watching the “newer” cut, titled “Remix – The Fateful Consequences”. Luckily, Netflix still kept the “original cut” under “Trailers & More”, and that one was much more palatable. Not just that, but if you stick with it and binge it as we (my girlfriend and I) did, you end up enjoying that season very much. I might be in the minority from what I have read on “the internets”, but I 100% prefer the original cut. It seemed more cohesive, and I loved how if you watch the show closely, you will notice little details in each episode and quickly discover how intertwined the story is how everything relates to each other.

The reason they have done it like that (speaking of the cast not being together for most of the season) was simple – most of the cast members became “big”, they couldn’t shoot around all their schedules, so they turned the negative into a positive. Well, at least they have tried. For many fans (again, from what I have read after finishing the entire show), this is their least favourite season, but not for me. I might be on the island here, but when season four finished, I thought they did it well enough to the point I don’t think the quality dropped that much. What I mean by that – if it wasn’t for some of the cast members getting older, I might have presumed the fourth season was a part of the original “airing” before Netflix stepped in. The same can’t be said about season five.

Season five was a story of two halves. The first half was quite difficult for us to get through, as even the characters we could always rely on being funny (Gob, Buster) seemed to be less funny. And I swear some actors seemed to be done with this show. Well, luckily, the second half of season five was much better. It still never reached the “peak” of the original three seasons, or even season four, in my opinion. But at least I could see what they were going for in terms of the story. Well, except the very weird, almost out of place ending, making Buster into an actual murderer…? I know this show was always trying to balance edgy, darker humour but those last minutes seemed really out of place.

But here’s the thing about both seasons four and five. I understand why the fans don’t like them as much, as I have alluded to the fact slightly. Their entire dynamic is different because we only get a couple of scenes where the entire family is together. And that was the strength of those first seasons. These characters on their own can be dark, despicable and very out of touch wealthy people, and that’s the entire joke/point here. But, because of a couple of characters, who have always been more down to earth than others (well, let’s face it, mainly Michael aka Jason Bateman), we could always rely on them being called on their behaviour or made fun of, in some way. The ensemble cast was this show’s biggest strength, the sharp dialogues for even sharper characters. But in the Netflix seasons, we barely got those moments, and therefore, we could see the characters we know and love to hate suddenly getting more space by themselves or with only a few family members around and for some, it didn’t work as well.

Because the ultimate strength of this show was the (albeit dysfunctional) family dynamic and how sometimes, almost accidentally, they inspired each other to be better. Maybe just a tiny bit better, but still. And it simply couldn’t be the same with characters as complicated as most of these are.

I can’t review this show without mentioning some of the actors. I’ve already mentioned Jason Bateman, who is great in this show. But my absolute favourites are two women who stole any scene they were in – Jessica Walter (rest in peace, Lucille) and Alia Shawkat (aka Maeby). At first, these two characters seem to be pretty much the same – sharp-witted women who don’t take any crap from anybody. But there are differences. Jessica’s character was the true “devil” of the family. Her character to me was the impersonation of the old saying we have in the Czech language that roughly translates to “Where the devil can’t succeed, he’ll send a woman.” Yep, it’s an old and sexist saying, but it is supposed to be a funny one, not to be taken literally. But I can’t help and think it fits so well for her character – I loved the fact that even though it’s later explored, and explained why she was the way she was, she was behind almost everything “evil” this family was entangled. Hell, she was even ahead of “the Donald” in 2013 when came to the border wall! Or was he such a big fan of this show? We might just never know.

Whereas Alia’s character has her moment, where she takes things too far, but she either never goes “fully” evil, or her intentions are always good, and the situation simply spins out of her control. But her character Maeby is funny, clever, and is just looking for some love/validation from the rest of the family. Well, mainly her parents. She was the highlight of season five for me by far. The entire story arc of Maeby pretending to be old so she can escape the world was one thing I genuinely was looking forward to for the entirety of season five. Of course, I could mention pretty much the rest of the cast because there all were great, but I can’t lie – Lucille and Maeby stole the show for me. They were the only two characters in my view who never got tired, too overused, and they both always managed to surprise me.

Overall, Arrested Development is 100% worth your time. It is one of those shows that got cancelled too early and unfortunately became one of those “be careful what you wish for” examples when fans are trying to bring some other cancelled too early shows back. But even though the quality of those last two seasons isn’t up to the “golden” standard of the first three seasons, there are still some good laughs to be had. Especially in season four, which in my view, gets a bad reputation. I need to repeat it here too, but if you watch this show for the first time, make sure to watch the “original cut” of the fourth season. I’ve read someplace that even the worst episode of Arrested Development is still better than 80% of current comedy shows, and I could see that. This show definitely is a legend and created something that will last for years to come. I am just hoping they won’t bring it back again, especially now, when Jessica Walter is no longer with us. We can only hope that is it for this show.