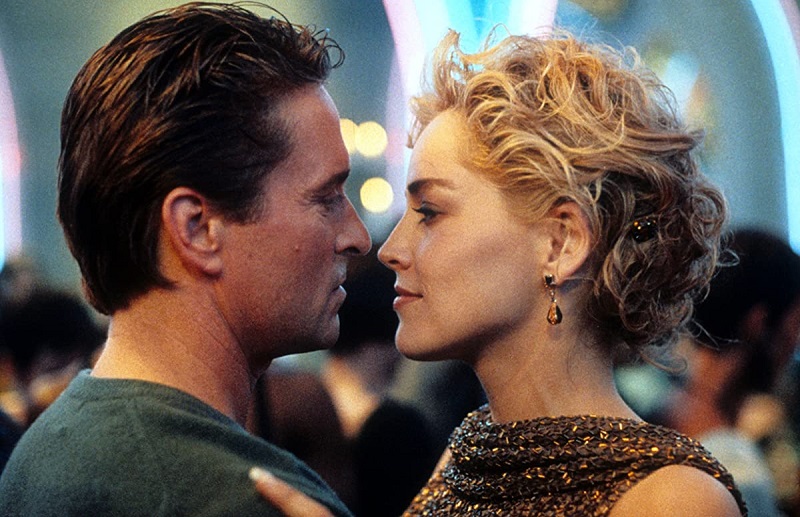 If there is a movie that sums up what 90’s were all about (cops, mystery thriller, nudity), Basic Instinct might be it. This thriller/crime film with a dash… well, more like a proper pint of pretty outrages scenes still holds up even today. Which is what makes it a bit bizarre, if you consider the people behind this movie are the same ones who couple of years later made Showgirls (1995) (my review here). Yep, not only the same director, but the same exact screenwriter! I know!

The biggest difference between those two is Paul Verhoeven trying to tell a story, rather than trying to be clever. I know this sounds mean, but hear me out. While watching Showgirls, if you pay close attention throughout that wreck of a movie, you might notice how there was an attempt to be satirical/critical towards show business, Hollywood, almost like a giant middle finger to the “sell outs”. And it feels like he went on almost a crusade, which can lead to great things, but sometimes they just lead you to your doom. Whereas Basic Instinct is just a good old fashion crime mixed with thriller mixed with lot of nudity, but there is a focus. And not just on Sharon Stone‘s private parts, but focus on the characters who might behave like maniacs (Michael Douglas‘s character is a prime example of an unstable person you will see in a while) but they are still grounded in reality, so you understand why they behave like they do.

Both him and Sharon have an excellent chemistry and play characters who are so compelling, that in a way, the nudity is almost hurtful for the movie, as that’s what people tend to remember/focus on. And they often forget that even minus all that nudity… well, the movie would have been a lot shorter, that’s for certain. But more importantly, you’d still have a pretty great movie with a compelling story on your hands, where you are not sure until the very last minute, who’s the killer, or whether there is one “normal” person in this film.

I do feel a bit bad for Sharon Stone. She’s so stunning (and naked) in this, that people tend to overlook that she’s genuinely great and not because of the nudity! If you were to cast somebody who’s “just stunning” without any acting talent, this movie would have become Body of Evidence (1992). No disrespect to Madonna herself, but that movie wasn’t exactly the highest/brightest point of her career. And that’s the point – because Sharon is actually more than just “great body to look at” and gives us properly fleshed out character, who is believable. Next time you watch Basic Instinct, try focusing on Sharon (not just in THOSE scenes, you perv!) and I think you will realise that she doesn’t get the accolades she deserves for this movie. If she didn’t sell us on her character, this movie would’ve been long forgotten and she wouldn’t have had the career she’s had.

I was surprised how much I’ve enjoyed re-visiting this movie. For some weird reason I thought this won’t age well, that it might just be one of those “this was so great in the 90’s, but now it doesn’t really hold up” films, but either my standards are low, or this is still pretty great crime mixed with thriller, that on top of everything has Sharon Stone in her prime, leading this movie and pushing it a good grade higher than it deserves to be. And yes, she’s not exactly bad to look at, but that’s beside the point. I still haven’t seen Basic Instinct 2 but based on what I’ve heard and the ratings, I don’t know whether I want to… But knowing myself, curiosity will get the better of me…