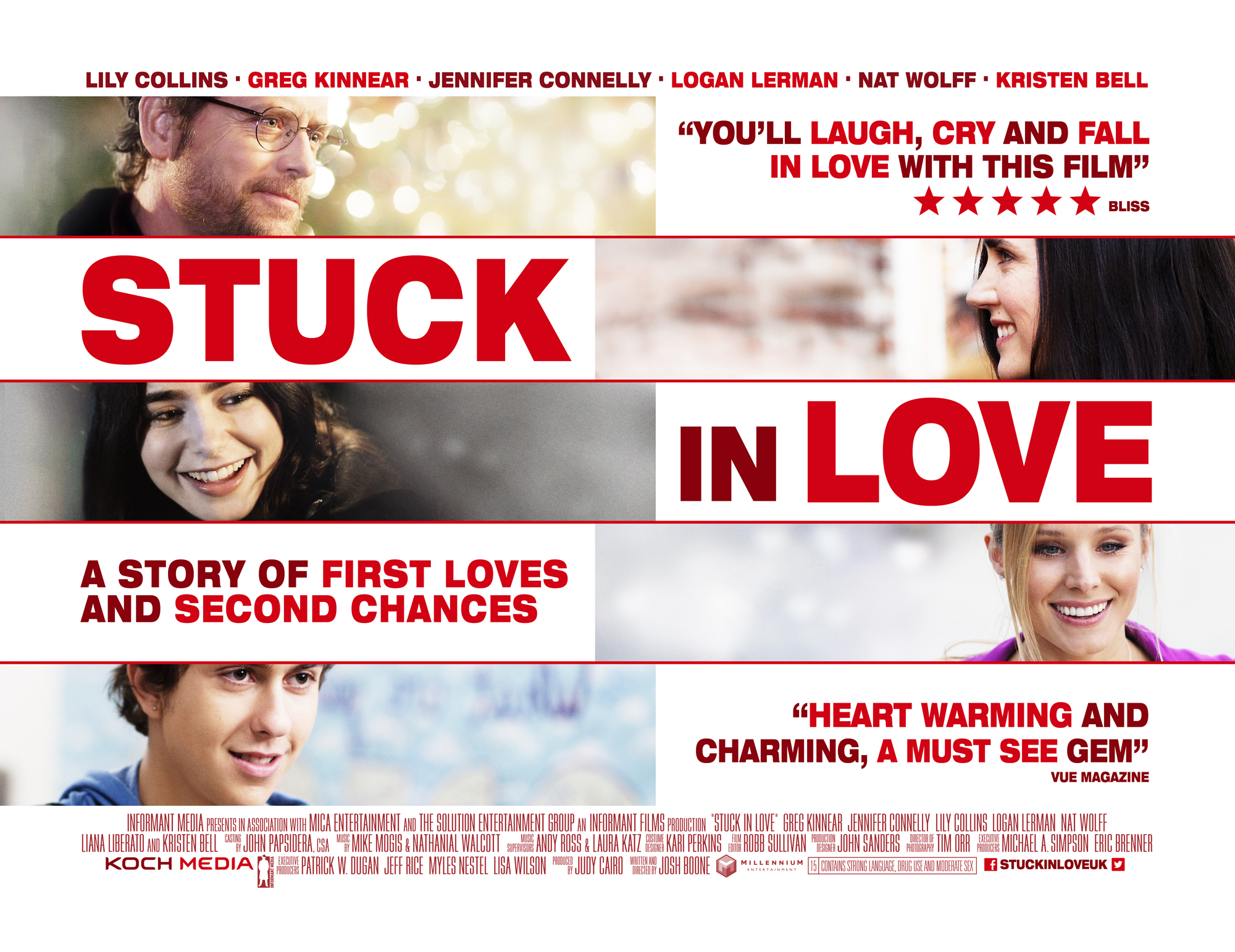 Stuck in Love. (why is there a dot in the title?) could be subtitled “or how to shoot a Hollywood romance, that tries to touch on difficult topics, but doesn’t have the balls to commit”. But I understand, that wouldn’t fit on the posters, and these long sub-titles aka Dr. Strangelove or: How I Learned to Stop Worrying and Love the Bomb (1964) are almost thing of the past. But I think it would fit this movie to the T. Everything here is quirky, wannabe deep, that you just know where the story goes and the only relationship that I wanted to explore (daughter hating her mom) flips half way through into “oh, she just didn’t know this vital piece of information”…

Yes, this movie made me slightly mad. The problem here is this is how people in Hollywood think “normal” people live, talk and act. Except they/we (at least people I know) don’t. These movies want to be so “approachable” and “show you how it is” but what you are seeing is just something most people can’t relate to. And the one part of this story plenty of people could relate to (the mother daughter relationship) is going someplace, but the movie didn’t either have balls to explore it properly, or didn’t know how to make it into a “feel-good story” that they have cheated in a massive way. And, with bit of a brain, they could have had more complicated, more down-to-earth story, that could still have happy ending.

It’s really hard reviewing this movie without going into the spoilers, so let me just say, that overall, there isn’t anything memorable about this movie. The actors are great, but wasted, every character feels as real as Pamela Anderson’s boobs and everything is so predictable… With that said…

The only storyline that felt real and intriguing to me was the relationship between Lily Collins and Jennifer Connelly (both stunning and great actresses in their own right, but again, had not much to do here). As the movie goes along, you discover the reason Lily hates Jennifer is because of Jennifer’s character cheating on her husband. And Lily saw them. So naturally, she blames her mum for the divorce and doesn’t want to have anything to do with her. And where a smarter movie could have had a great scene between those two characters, where we could get both of their points of view, maybe some shouting match, this one “resolves” it by cheating. What I mean is, about 75% into the movie, we learn that her father was the first one to cheat some time ago and Jennifer forgave him. Which is so lazy. Because not only this makes the husband (played by Greg Kinnear) pretty lousy, but on top of that, that makes him an awful dad! What monster would leave his daughter hating her mom KNOWING very well the reason she hates her mom (for OVER 3 YEARS !!!) without at least telling her “Look, hate her all you want, but I am no saint, and here’s why.” Done, movie’s sorted, credits roll. But also, this felt really cheap for another reason, as that makes the daughter a villain, as she needs to acknowledge she was wrong, even though she wasn’t given the whole truth to truly decide for herself! So of course, the movie finishes with them reconciling, as “It’s fine you hated me for 3+ years, you didn’t know your dad was a bit of cheater too, hey, it’s fine, come have some Thanksgiving dinner with us. And on top of that, of course, I will go back together with your dad, because I can’t just exist without that whiny guy. I am so sick and tired of that muscly guy! Your cheating dad, who was lying to you about his affair for 3+ years allowing you to hate me, he’s the guy I need!”

What infuriates me the most is that the movie could have been so much better, if they tried to avoid these bullshit shortcuts. Just imagine this – we get mother daughter scene about how sometimes, as you get older, you change, you evolve, but some people stop evolving. So in order for her mum (Jennifer’s character) to be truly happy, she had to leave her dad, as he wasn’t doing his part. That could have setup some big emotional scene with Lily’s character, where they could have maybe hinted at the very end of the movie, that they might reconcile. Maybe the next day, maybe the next month, maybe next year. Or maybe they never will, but guess what…? That is also fine. It could still play as “happy-ish end”. And as far as the ex-husband and ex-wife coming back together… just no. Please, can we try to normalise people who divorce, BUT move on and still stay friends? This is what I mean when I say nothing feels real in this movie, as this is typical Hollywood nonsense – either the divorced couple ends up back together at the end of the movie, or they hate each other and never talk. There seems to be hardly anything in between.

My rating would have been much, much better if this movie didn’t follow every single cliché this genre had given us over the years. Because the actors are all great, the story is also there, but because of lazy shortcuts, or unwillingness of trying to do something we haven’t seen as much before, this movie just feels lazy, boring, predictable and… did I say boring?