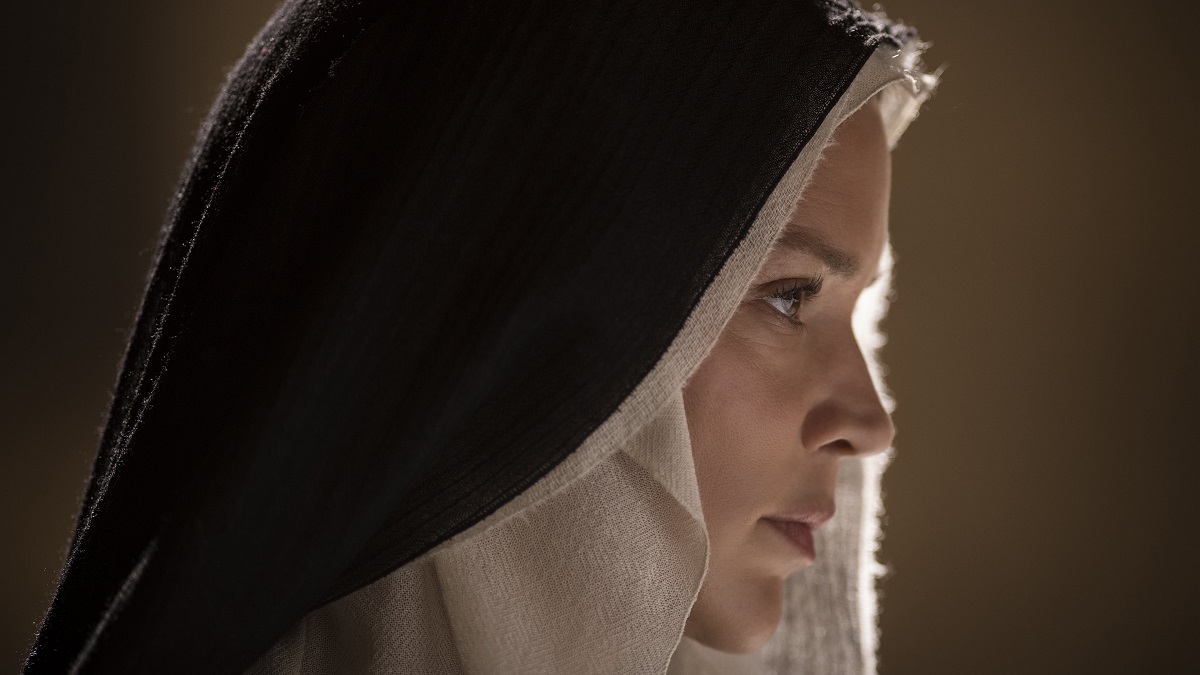 If there is a director who seems to be on a steady “comeback trail”, it is Paul Verhoeven. One of the most influential directors of the late 80s and early 90s, whose career was put… let’s say, on hold after making one of the worst box-office bombs of all time. Yes, I am aware it developed a cult following since then, but Showgirls (1995, my review here) was a massive failure. Sure, by today’s standards, it’s not that bad, making only $22 million dollars on a $45 million dollars budget; however… if you consider a movie needs to earn roughly 2.5x its budget back before even breaking even (at least that is the widely accepted rule of thumb) and also remember this was back in 1995, where the dollar was worth much more… that must have hurt. Anyway, Benedetta is only Verhoeven’s sixth film after Showgirls, and there is a gap of 26 years! And based on this, Black Book (2006) I saw around the time it came out, I am hoping he might do more films “a bit” more often than that. Because underneath all that nudity his movies are known for, there is always something more to chew on. And Benedetta is no exception.

I think your enjoyment of this film will correlate with your views on religion. I would imagine somebody who isn’t religious at all (like me) might enjoy Benedetta just a “smidge” more than a Christian who has always led a religious life. Sure, some religious people can set aside their faith and watch any movie that openly talks and (let’s face it, more often than not) critiques religion with just their “movie fan” hat on, but I think those were exemptions proving the rule. As you can see, I put my cards on the table; I have always been open about being an atheist, therefore, I bring my own baggage into this – I don’t think religion is necessary anymore. But that’s for another debate altogether; we are here to talk about Benedetta. And believe it or not, I don’t think Paul is being cheeky with religion or Christians or anything like that. I think the point of this film is to showcase the main flaw with any religion – people.

Take our main heroine, Benedetta. She realises that everything she does throughout the film is conscious. Yet she manages to persuade herself that she only does it because Jesus told her to do it. She somehow started thinking of herself as nothing more than a mere vessel for him. Therefore, anything she does is justified because she is but an extension of Jesus’s will. The problem with this logic is that, in reality, you can’t disprove it or argue with it. As that quote by Gregory House (yes, from the show House M.D. (2004 – 2012)) went: “You talk to God, you’re religious; God talks to you, you’re psychotic.” I don’t think this film portrayed Benedetta as a villain, quite the opposite. Her character genuinely believes (or made herself believe) that she was the vessel. And that is why I don’t think Verhoeven was being cheeky while making the film. If you stick with this film until the end, you will see that her character is flawed, but she puts everything, her love, passion and possibly her life, in danger because she believes she was the chosen one.

Benedetta was a fascinating film because the moment the movie ends, some people (myself included) will learn this was based on an actual person. There actually was a nun called Benedetta Carlini, and this film was (loosely) based on her story alongside the book Immodest Acts from 1987. I haven’t read the book, but now I am tempted to read it because this story was a unique “ride”. Let me explain – when you see the amount of nudity here, you might “take the bait” to think something like: “Oh well, Paul be Verhoeven again, horny old bastard.” And then you read a few things about the book and Benedetta’s actual life, and you realize that Benedetta couldn’t have been made in any other way. Sure, you can try and sanitize the story, but then the film would not have worked.

That is one thing I always admired about Verhoeven’s work; he pushes boundaries. He isn’t afraid of anything and is willing to show all the details others would have shied away from. And I am not talking about the nudity here, just the overall picture. It would be so easy to make Benedetta into a scheming woman; who is obsessed with power. Of course, you can see glimpses of that in Virginie Efira‘s brilliant performance, but, as I mentioned before, her character is so complex you can easily argue she was just a “victim” of circumstances. The same set of circumstances that almost “allowed” her to do what she did. Without spoiling anything, before the last ten minutes of this movie happened, I was convinced she was “just” a power-hungry scheming individual. But the ending convinced me to see her as a more complex character. So yeah, Paul has done it again, pushed some boundaries, and delivered a film you won’t see every day.