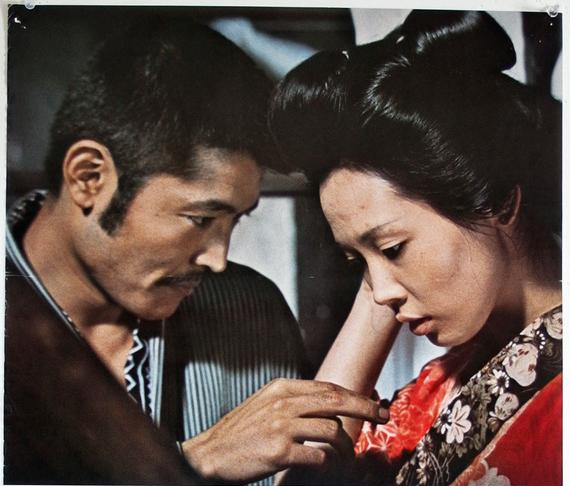 Before reading my review, I highly recommend reading something about Sada Abe – yes, this movie is based on a real life incident, and her life seems exactly the way you’d expect after watching this movie.

I’ve heard a few things about this movie, so I thought I was prepared for it.

Forgive me, if my sentences are shorter than usual, but I’m still trying to process what I’ve just watched.

In the Realm of the Senses is not a movie for everyone. It’s definitely on the artsy side of movie-making, where it’s not hard to follow (the story couldn’t be more simpler) but you need to get over all the nudity, sex, devotion, passion… Let’s put it this way, if you are one of those people, who blush easily during a Hollywood “sex scene”, prepare to be as red as communist’s flag on 1st of May, as boy, oh boy… This movie isn’t about anything else than two people being devoted to each other, where both take it too far (but arguably Sada took it way, way further).

The version I’ve seen was 109 minutes, but I guarantee you, if somebody was to cut all the non-sexual scenes from the movie (and I’m almost 100% convinced somebody’s already done that) the movie would still be around 85/90 minutes. That tells you everything you need to know. In a way, it’s fascinating.

I feel like this is more about what the movie is trying to make you feel, rather than the visuals. Because after a while, you become desensitised to all the nudity and sex, and start noticing how by each act, each new day, the stakes between the couple are getting higher, the passion/devotion these two had for each other, there was something special about that. I’m not saying something healthy, or something we should all be aiming for, dear god no. But when you focus on the story/character of Sada, and her passion to control the love of her life to the point where it results in one really disturbing scene most men would love to never see again in their lifetime, that’s when you either understand the method to the madness, or not. Because at the end of the day, she was extremely sad, somewhat mentally broken character, and the way I read this movie, she was just looking for somebody to help/sympathise with her, somebody she could feel safe with.

I was a bit mesmerised by this movie, I thought Eiko Matsuda gave chilling performance and it’s s shame what happened to the actress after (basically she was shamed and almost banned in Japan, forced to life in France for most of her life) she made this film.

Is this a movie I need to see again? Probably not, but when comes to this I do have a rule, which is to never say never. But it’s definitely not something that you’d just pop in one Saturday afternoon for some quality family time (if yes, what the fuck is wrong with you? :-D)

This is it for this controversial movie. Have you seen it? If so, what did you think? Let me know!