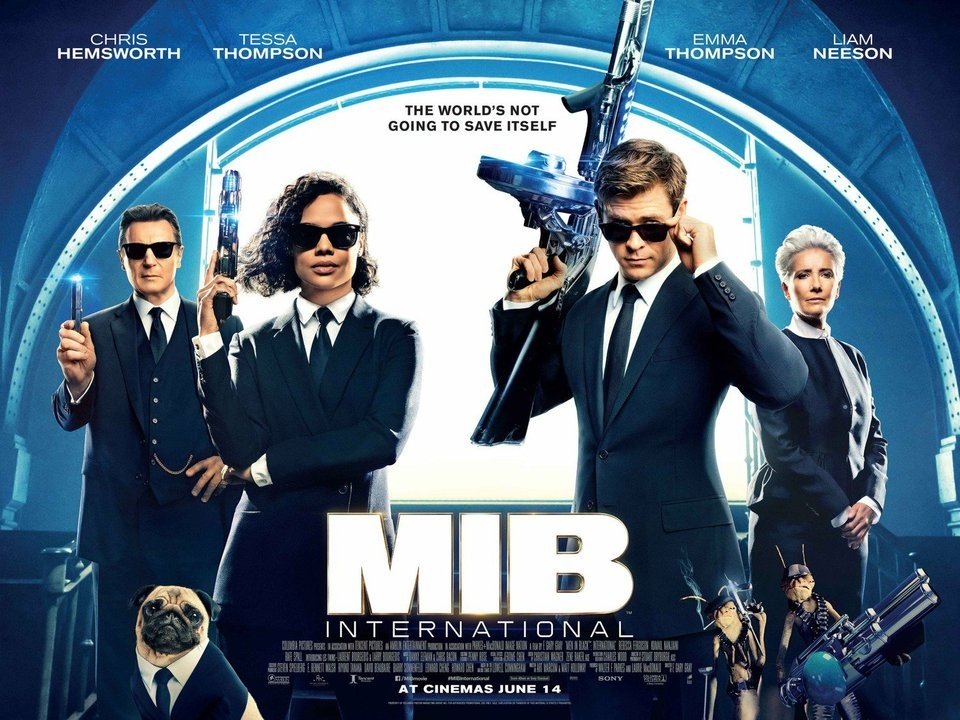 Where to start with this one…

I really like the original Men in Black (1997), as it was surprisingly refreshing blockbuster – fun, charming, really good screenplay, and great chemistry between Tommy Lee Jones and Will Smith, that was what made it the surprise hit of 1997 (see for yourself here). Mainly the monologue Tommy Lee has stuck with me ever since:

So no wonder, 5 years later, the sequel was born, which is still watchable, but proved that bigger is not always better. But again, it was a decent movie, where at least you weren’t bored watching it.

10 years after that, Men in Black 3 came about and I’ve only seen it once, and remember feeling… alright. Almost as with the previous one, it was alright, but not really memorable in any way, shape or form. But also not boring, or unfunny.

And now (or, year 2019, to be exact) Men in Black: International found its way onto the theatre screens, with brand new (all sexy now!) cast, brand new settings and… and… yeah, that’s pretty much it.

This movie fails as a spin-off of this franchise, as there is almost nothing tying it back to the original trilogy, but what’s worse, this movie fails as a comedy. The only person, who’s actively trying to make us laugh is all CGI (yes, all hail Kumail Nanjiani) but guess what? Even he can’t save this movie, as he definitely has had better roles. And that’s what I don’t understand.

We know Chris Hemsworth can be surprisingly funny and engaging character on screen (his almost a cameo role in Vacation (2015) was definitely the highlight of that movie, and as much as it pains me to write this, he was the best part of the Ghostbusters (2016)… well maybe after Kate McKinnon, who tried to save that movie, but that’s a review for another day) the same goes for Tessa Thompson who we know as charismatic and capable actress that had pretty solid chemistry with Chris in Thor: Ragnarok (2017). So what went wrong? How come, suddenly, these two don’t work as well? That’s the main issue with this movie, what was supposed to be THE reason this film should have worked (duo that worked well in the past), turned out to be its biggest problem…

When your comedic duo doesn’t work, the movie around them can’t work, unfortunately it is as simple as that and I don’t know if it was the script, or the direction, or bit of both, but there was no chemistry for me here. And it’s not like they were particularly bad, but they didn’t work well together.

Another problem I had with this movie, but that’s mainly for almost every single major movie these days… everything looked fake. Especially in this movie, every location looked like they were shooting on a set, surrounded by green/blue walls. I understand there will always be CGI involved, as, you know, it’s a movie about space and aliens, but even the desert location looked fake to me. Maybe it was, in which case, I shouldn’t have noticed that. And if they were shooting in desert, how did you manage for it to look so fake…?

One last reason this movie didn’t work for me was the way they had decided to “telegraph” who’s the main “surprise” villain of this movie basically ever since he steps on the screen. I don’t know who came up with that, as again, I know it’s kind of generic Hollywood thing nowadays, for villains to be obvious from the very beginning, mainly in comedies, but come on… why? Can’t the audience be trusted to figure it out on their own, or to have fun figuring it out anymore? You don’t even need to be a movie maniac like myself to know almost instantly Liam Neeson is the actual bad guy (duh).

That is why this movie doesn’t work for me overall – it’s a mix and match, generic Hollywood screenplay with some questionable CGI, sexy people taking over a franchise that was once popular, where studio throws everything on the wall, hoping something would stick. In this case, almost nothing does. I’d rather watch second and third MiB movies back to back several times, than watching this movie one more time.

That’ all for this one! Did you see it? What did you think about it? Let me know!